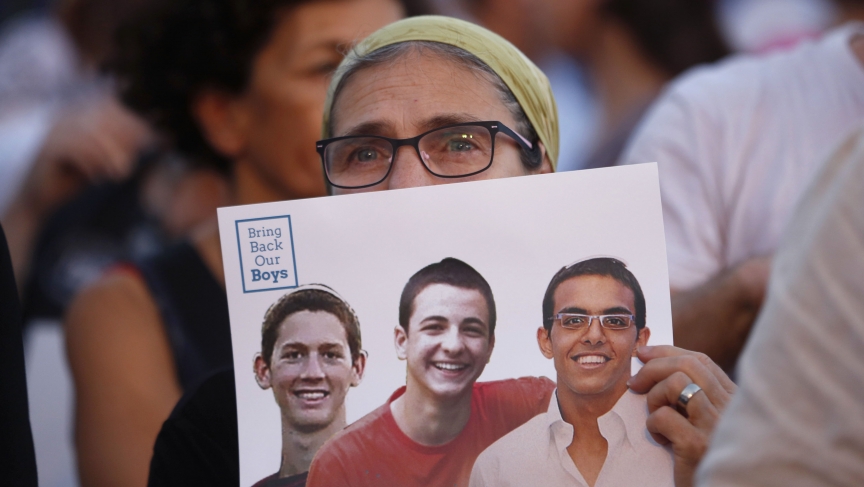 An Israeli woman holds a sign with images of three missing Israeli teenagers, at a rally in Rabin Square in the coastal city of Tel Aviv.
Credit:

The bodies of three missing Israeli teenagers have been found near the West Bank city of Hebron, the Israeli Defense Forces announced on Monday.

The news put a sad end to the manhunt that had gripped Israel and put much of the West Bank on lockdown over the past two weeks.

The three boys — Gilad Shaar, Naftali Fraenkel and Eyal Yifrach — were students at a yeshiva, a Jewish seminary, near Hebron. They went missing a little over two weeks ago. Their bodies were found buried in a field just a couple of miles from where they were kidnapped, according to Sheera Frenkel, the Middle East correspondent for Buzzfeed who has been reporting on the story from Jerusalem.

“The fact that they were found so close to where they were kidnapped ... has led investigators to believe that it was, in fact, two wanted Palestinian men from the Hebron area who took them,” Frenkel says.

The teens were in an Israeli settlement block, hitchhiking home from their yeshiva, when they were bundled into a car just after 10:30 at night.

“Hitchhiking is actually incredibly common in the West Bank,” Frenkel says. "It’s part of what a lot of settlers consider their culture there. They feel they can come and go on the roads between the various settlements and that they should be able to be safe doing so.”

Frenkel visited the place where the teens disappeared earlier this week, just north of Hebron. It's a huge open field, she says, but the area is also full of caves.

The caves, according to an Israeli official who spoke with Frenkel, are one of the reasons why the teens were so difficult to find. The current assumption is that the kidnappers shot the teens near where they were hitchhiking, buried their bodies and then fled to hide in those caves.

“There’s an untold number of [caves,]" Frenkel says. "[It is] very difficult terrain and very easy to hide."

Despite a gag order imposed by the Israeli military, information has leaked out. Some have suggested Israeli officials knew as early as a week ago that the teens were most likely dead.

More than 240 Palestinians have been arrested since the search began for the boys and Frenkel says the atmosphere in Hebron on Monday evening was tense.

“Hundreds of Israeli soldiers have actually flooded that area and closed off all of the main roads," she says. “We’re also hearing that [Israel Defense Forces] soldiers are going house to house around where two of the suspected men live. There is a lot of fear that there’s going to be clashes tonight between local Palestinians in Hebron and [the] IDF there.”