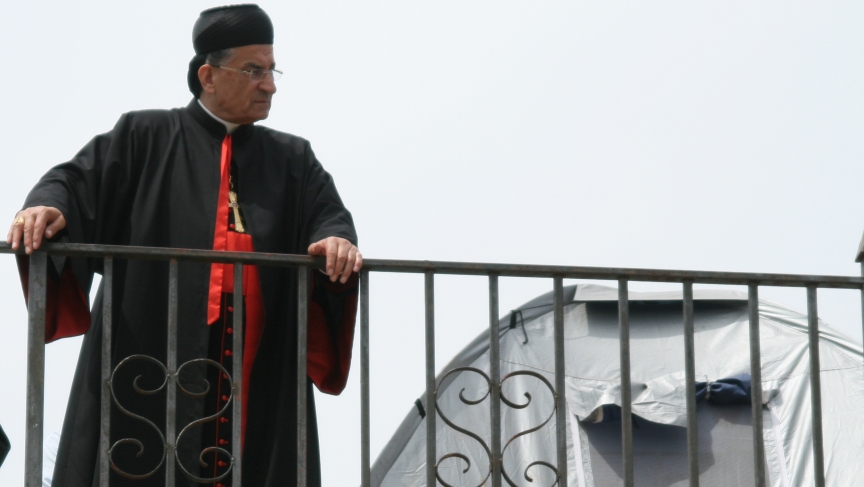 Lebanese Maronite Cardinal Bechara Rai looks over the ruins of Kfar Biram from the top of the village's church in northern Israel. Activists have been living in tents on the site for months to pressure Israel to allow them to rebuild the destroyed community.
Credit:

When Pope Francis visited the Holy Land last May, one member of his entourage stood out: Lebanese Cardinal Bechara Rai, the patriarch of Maronite Christians.

Lebanese citizens are banned from visiting Israel because the two countries are technically at war, but clergy of the Maronite church are exempt. Still, Rai is the first Lebanese cardinal to visit Israel.

The message Rai brought was for Israeli members of the Maronite church to stay connected to each other, and to fellow Christians around the world.

A local Maronite bishop introduced Cardinal Rai to a crowd of several hundred, but he needed no introduction. He is, after all, the religious equivalent of a rock star.

“There is no church that didn’t suffer before, and we are also here suffering,” he said. “We are not different from other Christians suffering in other places.”

The cardinal spoke at the entrance of an old stone church, one of the only remaining buildings from the Maronite village of Kfar Biram in northern Israel. During its 1948 war for independence, Israel asked residents to leave for two weeks — and never let them come back. Former residents and their descendants have been trying to return ever since.

In recent months, a few hundred activists have pitched tents on the site of the village’s ruins, raising chickens to show they can revive the village. Cardinal Rai said he would ask the Vatican to encourage Israel to allow Kfar Biram to be rebuilt.

Rai’s visit felt like a party. Teenage boys tossed sandwiches to the audience; older volunteers gave out white baseball caps printed with the cardinal’s picture. Massive posters welcomed the cardinal to the village, an honor Kfar Biram has not had in several centuries.

But the cardinal’s festive visit underscored a tough question: where do Maronite Christians fit in today’s Israel? Shadi Khaloul helped make sure the event went smoothly.

“We see Syria, in Iraq, in Egypt, we see there is no future for Christians in these Arab Islamic countries,” Khaloul said. “So I prefer to live with my Jewish brothers and defend this country.”

Khaloul served in an elite unit of the Israeli army. He’s now part of a group encouraging Christian Israelis to enlist. He says Maronites can serve because they’re not Arab, or Palestinians — they’re descendants of Arameans, a group that originated in modern day Syria a few thousand years before Christ. Khaloul is also trying to revive the Aramean language, Aramaic, which was spoken by Jesus but has been nearly forgotten in the past few centuries.

“The Maronites have [an] identity, and their national ID is Aramaic Phoenician. And we would love to keep it and preserve it and not to get involved with the Arab-Israeli conflict,” Khaloul said.

But the wider Maronite community, which generally identifies as Israeli-Arab, isn’t so sure. Attorney Michel Aoun, whose parents fled the village of Biram, said Khaloul is stuck in the past.

“This is ridiculous,” Aoun said. “You are what you are, today; you are what your father was maybe 50 years ago. But you can’t be something that your ancestors 3,000 [or] 4,000 years ago became. Historical facts are that the Christians living in Biram are original Palestinians, okay?”

Tenth grader Aseel Lukkah also didn’t care much for her supposed Aramean roots. I ask if she speaks Aramaic and she chuckles. Her answer catches the ear of a man standing nearby.

This division over the responsibility of Maronites to remember their past and their loyalty to Israel is at an all-time high right now.

Amal Jamal is a political science professor at Tel Aviv University. He says the rise of Islamic fundamentalist groups, like ISIS, is forcing Maronites to make a choice: Do they stay with their fellow Arabic-speaking Palestinians, or do they join with a stable country like Israel?

“There are very deep rifts and differences and a very strong debate within the community itself concerning what would be the best future,” Jamal said. “You have those who still want to keep and maintain their Arab identity and their affiliation with Palestinian people, and you have those [who] prefer to view their future with Israeli society, hoping Israel can provide them with more safety and stability for the future.”

The stakes are high. Maronites supported the regime of Bashar al-Assad in Syria, but have since suffered attacks by both the government and by Islamist rebels. Most of Iraq’s Christians — including a sizeable Maronite community — left over the last decade and thousands more are leaving in the current turmoil.

After Rai finished talking, Maronite believers lined up outside the church and filed in to shake the cardinal’s hand. Rai looked parishioners in the eye, shook their hands and touched their faces. He came to help the community stay connected — but that sense of togetherness is getting harder to maintain.