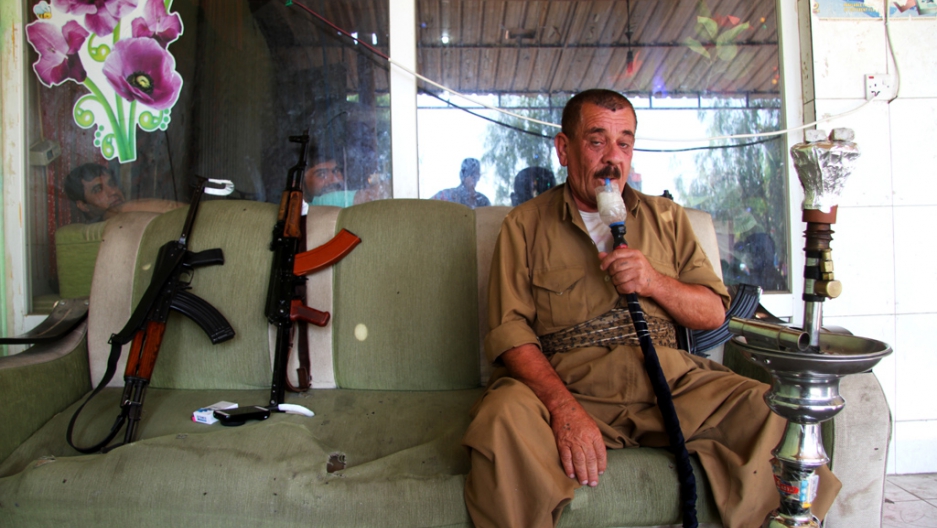 "Everyone in Kirkuk has at least one gun!" says this man who asked not to be named. He's sitting at a cafe across the street from a row of arm shops, in Kirkuk's downtown.
Credit: Susannah George
Share

KIRKUK, Iraq — The crisis in Iraq has so far been good for business among Kirkuk's arms dealers.

The city, rich in oil, has long been at the heart of the conflict between Iraq's central government in Baghdad and the country's semi-autonomous Kurdish region, with both Kurds and Arabs claiming the city as their own.

As the Iraqi army's northern command disintegrated in the face of a swift advance by Al Qaeda-inspired militants two weeks ago, Kurdish security forces moved in — and arms dealers did too.

Seemingly overnight, vendors popped up to take advantage of the supply of guns left behind by Iraqi soldiers as well as people's desire for weapons to protect themselves in uncertain times.

In Besieged Kirkuk, It's Time To Buy A Gun from GlobalPost on Vimeo.

"I wish every day there was war," said Satar Hashem, a weapons dealer who set up shop on a street corner not far from the city’s nearly 3,000-year-old citadel.

Between two cigarette kiosks and across from a water-pipe cafe Hashem displays his wares: a few dozen handguns atop plastic crates and a cloth bag full of ammunition.

"The people are afraid so they're buying weapons," he said, adding that the increase in demand has pushed prices up.

Kalashnikovs that once retailed for a little over $2,000 are now selling for close to $5,000. Higher up in the market, Glock pistols have more than doubled in price: $4,000 before the conflict, now more than $11,000 and in short supply.

The only guns whose prices haven't changed dramatically, weapons dealers at this market say, are arms used by the Iraqi army. The market was flooded with them when soldiers deserted en masse. The peshmerga, or Kurdish security forces, and the Iraqi military estimate a minimum of 10,000 assault rifles were looted from military positions in Kirkuk alone.

Jassem Mahmoud, seated at a cafe across the street, says what you see now is nothing compared to the chaotic scenes right after ISIL first advanced across northern Iraq.

"Everyone was saying Daash is coming," he said, using the Arabic acronym for the Islamic State of Iraq and the Levant (ISIL), the militant group with strongholds in Syria that continues to lead the advance toward Baghdad. "People were terrified, buying and selling weapons almost without thinking."

Now, Mahmoud says, the peshmerga have calmed people down and sales have leveled off. Policemen are back out on the streets and markets like this one in Kirkuk are bustling.

But residents say they’re uneasy and the situation is unpredictable. Last week, a series of apparently ethnically motivated assassinations and a suicide bombing rattled nerves.

At a cafe across from the gun market in Kirkuk, men examine their purchases. (Susannah George/GlobalPost)

Home to Kurds, Arabs and Turkmen, Kirkuk also hosts ethnic tensions rooted in thousands of years of history and stoked by recent conflicts. In the 1990s, Saddam Hussein evicted hundreds of Turkmen and Kurdish families, moving in Iraqi Arabs to take their place.

"The way to improve security would be to kill all the Arabs," said Hashem, a Kurd, to jeers and laughter from other men browsing merchandise.

"I'd never sell to an Arab," he said bluntly. "They can’t even enter this market."

Ibrahim, a former major in the Iraqi military stationed in Kirkuk, concedes the peshmerga are doing a good job. "Compared to other cities in Iraq, the situation in Kirkuk is pretty good," he said.

"The Iraqi military would never have been able to keep the border secure the way the peshmerga have," he said, referring to the nearly 1,000-kilometer border Iraq’s Kurds now share with the Al Qaeda-inspired militants.

Ibrahim, who asked not to give his last name for fear of reprisals, said he resigned from the military shortly before the current crisis because he was appalled by the Iraqi forces’ unprofessionalism.

"They just sat in their headquarters and their offices," he said. "All they did was sleep. They're just a bunch of losers, that’s why I quit."

"Everyone in Kirkuk has at least one gun!" says this man, who asked not to be named. (Susannah George/GlobalPost)

The peshmerga may have the border under control, but security within the city is another issue. The same police force that was present when Kirkuk was under Iraqi army control maintains order in the city today.

Ibrahim says the policemen are still paid by Baghdad. As long as the situation in the capital remains unpredictable, residents fear that they could wake up one morning to find their police force has vanished — just like the military did.

Back at the weapons market, Mahmoud sits in a plastic chair. He says he thinks the peshmerga have done a good job so far, but he's still stocking up on bullets just in case.

His hand rests on two Kalashnikov magazines, next to a glass of tea. "Yeah, the peshmerga are here today, but tomorrow? Maybe not."