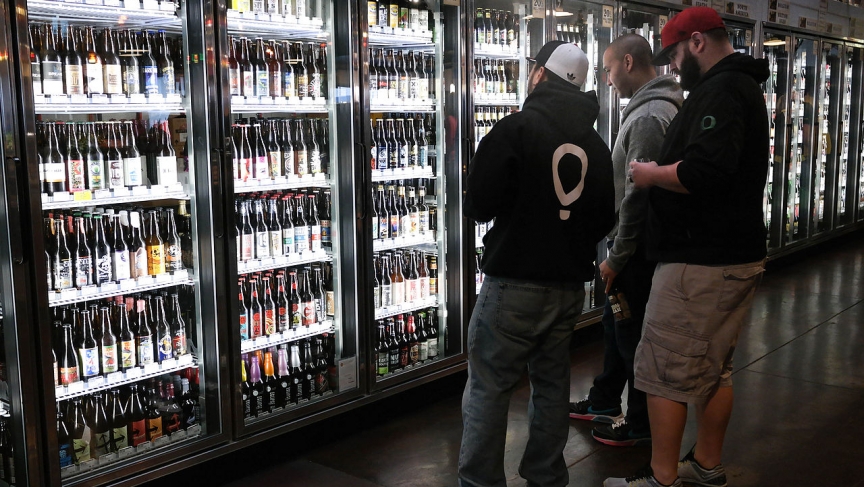 Beer buyers contemplate their choices at The Beer Stein in Eugene, Oregon. Many of those choices are brewed by Oregon's 171 craft breweries.

If you're planning a summer trip, here's an idea: July is Craft Beer Month in Oregon.

You may need all 31 of those days to sample all of the beers on offer. Oregon is home to more than 170 brewing companies working out of 70 different cities throughout the state.

Even if you just stick to Portland, you'll still have your work cut out for you: Portland has more breweries per capita than any other city in the country.

So what makes Oregon such a good place for brewing beer?

Before we answer that question, here's a quick beer primer: beer is made essentially from four ingredients: water, barley (which becomes malt), yeast and hops. Hops is the ingredient that adds bitterness to beer to balance out the sweetness of malt.

For centuries, hops were not the primary ‘bittering’ ingredient. A range of herbs were used instead, including some that were toxic — or extremely intoxicating. Then, in 1516, to protect the grain supply, Germany passed the "Reinheitsgebot," — or the Bavarian Purity Law — limiting beer to three ingredients: water, barley malt and hops. (Years later, yeast was added as a fourth allowable ingredient.)

Since then, hops has become the ingredient most crucial to the taste and quality of beer. As it happens, the Pacific Northwest of the US is prime hops growing country. Nearly 90 percent of US hops come from the Yakima Valley in Washington State and northern Oregon.

So, there’s one part of your answer: hops are plentiful and easy to grow in Oregon, making the region a perfect spot for craft breweries to thrive.

The other part of the answer lies in the ethos of Oregon’s citizens. Oregonians have an almost universal reverence for the land, and the state has developed a culture known for its art, music and appreciation for living in harmony with nature. These qualities lend themselves to the art and science of brewing craft beer.

Ben Tilley is a prime example. He's the owner of Agrarian Ales in Eugene, Oregon, which brews small batches of beer out of a converted dairy barn. He uses only home-grown ingredients, which he gathers according to the season.

“We are a very low-technology brewery," Tilley says. "Most beer was historically brewed on a farm, so we’re trying to replicate how beers were originally made back in that era ... We practice what you might call ‘adaptive brewing.’ Depending on what the specific seasonal conditions are, we will adjust what yeast we use and what [other] ingredients we use to make the beer that is most specific to the season.”

Agrarian Ales grows their own hops on-site. They grow a variety of herbs, too, which they use much like beer-makers of old: as a way to "bitter" the beer and balance the sweet malt profile. They only have about two-and-a-half acres of land surrounding the brewery, but that's enough to supply 100 percent of what they need.

Tilley says they use their hops in a variety of ways.

“You can use them as a bittering agent, putting them in the boil to really extract those bittering units out,” he explains. “You can add them into the [boiling] process for a short period of time just to get some flavor and aromas out. Or, after the beer is pretty much done its fermentation, you can do what’s called ‘dry hopping,’ where you add dried hops to the already fermented batch of beer to extract those fine essences, those really high-end qualities.”

Tilley says Agrarian Ales also applies its adaptive approach to their use of yeast, the other ingredient that determines the flavor and quality of a beer.

“Yeast is a live organism,” Tilley explains. “Depending on the conditions it's exposed to, it’s going to behave differently. Being low-tech, we aren’t able to control every component of the conditions — whether it’s the climate, the temperature, the moisture, the pressures — so we adapt to what that living organism adapts to. ... It is a little bit of a different way of brewing, in that we’re not trying to produce a consistent product each time, but just to produce the product that that living organism, the yeast, is meant to produce at that time.”

Leon Fyfe, a microbiologist who works with the Craft Brew Alliance, which includes local brands like Widmer Brothers and Red Hook, is also deeply involved with yeast.

A microbiologist at a brewery has two main tasks, Fyfe explains: protecting the beer from contamination before it leaves the brewery and making sure that the yeast fermentation is consistent — “that the yeast is happy, healthy, viable and is managed appropriately.”

“Ale yeast and lager yeast are actually two different species,” Fyfe says. “They behave much differently. They require much different inputs in terms of getting them to ferment and to create the thing that we love so much — the beer and the alcohol.”

Yeast fermentation gives beer its alcohol content, which can vary widely depending on the type of beer and the conditions in which it is brewed.

“Lager yeast likes colder conditions,” Fyfe explains. “They ferment at the bottom of a fermenter tank, whereas ale yeast ferments towards the top. If you observe the yeast and how they behave in their environment — especially if you are a home brewer and you can see the yeast in your glass carboys — you can see how the yeast behaves differently based on temperature. Lager yeast prefers a much cooler temperature versus an ale yeast.”

Though their approaches may differ, Tilley and Fyfe share the belief that brewing beer is both an art and a science.

“Beer was created through necessity and through the desire to produce art,” Tilley says. “Today we have this wonderful revolution of craft brewing that does revolve around the science and the deep understanding of what's really happening with this live organism, yeast, and how it's interacting with the components and ingredients that we put together.”

Oregonians would gladly drink to that. And they will — for most of July.