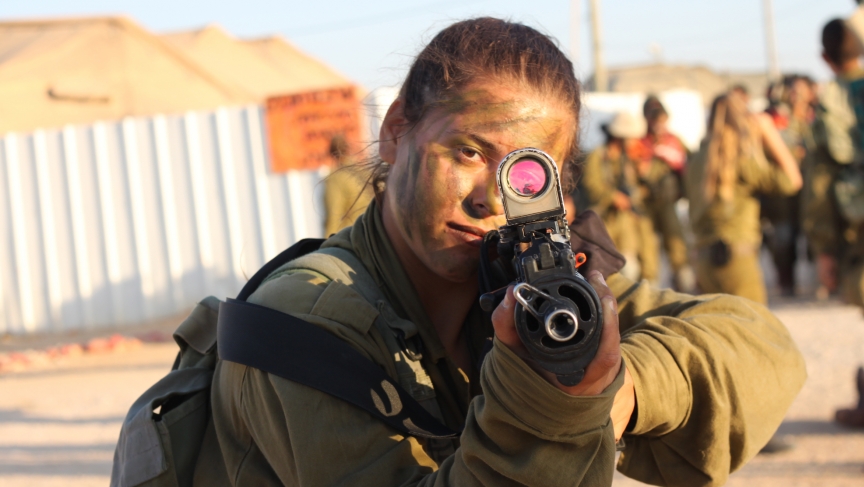 A female Israeli combat soldier poses for a photo.

The US military last week opened up 33,000 army jobs that were previously off-limits to women.

One of the most gender-integrated armies in the world is Israel’s, which has a combat unit that’s majority female. But there’s a debate in Israel over whether women really are fit for combat.

On a recent evening at their base, dozens of soldiers, most of them women, were about to begin the last step of their basic training — a seven-mile trek at night through the desert.

Soldiers’ faces were camouflaged in green and black. One soldier had painted her lips black.

A group of women asked to pose for photographs: one crouched down, pointed her gun at the camera and peered through the scope. Another dropped flat on her stomach, gun in position.

The young women are barely 18, and they are excited to serve.

“In a different place, we wouldn’t be doing these things,” said Liran Maoz, one of the women in the unit. “You also prove to yourself. You learn every day what you can do that you didn’t think you could do before.”

Formed in 2000, the majority-female combat unit, Caracal, gets its name from a desert cat that looks almost the same whether it’s male or female. It’s a cute metaphor which points to one of the problems of the unit: comparing soldiers to kitty cats doesn’t exactly help change stereotypes about women.

One male soldier in the unit, Daniel Zeno, says he’s not always happy about serving alongside women.

“They don’t, can’t, take all the heavy stuff, you know?” Zeno said. “I don’t like that the girls cry all the time, ‘This hurts, or that hurts.’ All the girls cry!”

Zeno said there is one thing he likes about serving alongside women: “They are beautiful. (Though) It’s distracting, a little bit,” he added.

Zeno sums up many of the questions people ask about integrating women into combat units: Can they ever match men’s physical prowess? Are they emotionally cut out for combat? And, isn’t mixing the sexes a romantic distraction?

In 2012, Caracal soldiers came under fire from attackers who crossed into Israel from Egypt and shot at them while they were patrolling the border, killing one soldier.

The women in the unit came under fire again — from the Israeli public. One female soldier reported in the attack, then went and hid behind a bush while the rest of the unit worried she’d been abducted or killed. It sparked a furious debate in the country, as Israelis asked if women could be trusted to protect the borders, instead of hiding behind bushes.

Sgt. Peleg says the criticism was rooted in sexism.

“If you would look for examples of why girls shouldn’t be fighters, you can find them,” said Peleg. “But I can give you, like, five different examples of guys who were fighters and ran away just the same, but nobody talks about it because it’s not interesting. OK, so this guy is not fit to be a fighter. It doesn’t implicate about the entire sex.”

Plus, in the same incident two years ago, it was a female soldier who shot and killed one of the attackers.

Today, 92 percent of jobs in the Israeli army are open to women, and about four percent of combat soldiers are women.

In 2007, a committee on women in the army recommended that the military open all combat jobs to women, including paratrooper and elite units. The army rejected the recommendation. An army spokeswoman said women don’t have the physical abilities needed for some jobs.

Similarly, in the US, army jobs opened up last week to women don’t include special ops or infantry units.

Before embarking on their desert trek, the Caracal soldiers gathered for a pep talk from one of their female sergeants. “You’re here to defend your home, to be willing to give up your life for your family, your friends and your nation,” the seargant said.

Many of the women in the unit share that determination.

“I think everyone here joined because they love the country, want to do everything for it, and if we are already going into the army, why not make the most out of it,” Maoz said.

It got dark, and the soldiers began their march into the desert, in total silence.

The following day, they would swear allegiance to their country at a ceremony. Then, for the first time, they would go home to visit their families with guns slung over their shoulders.