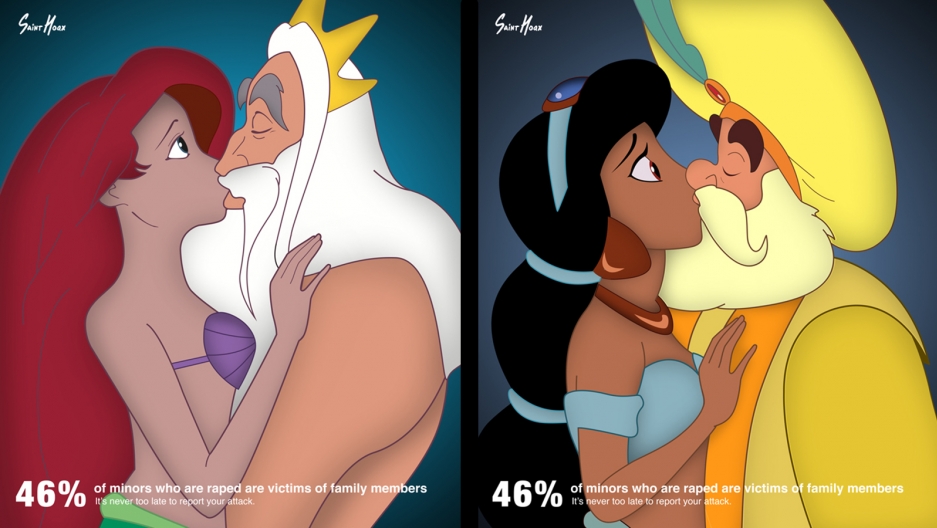 A new campaign from an anonymous Middle East artist seeks to encourage young women to report incest and family molestation.

Young girls around the world are familiar with this Disney princesses: Ariel, Jasmine and Sleeping Beauty.

But their images are cropping up in new places — and not in movies. An anonymous Middle East artist has taken the images of the princesses and put them in passionate embraces with their fathers. The artist, speaking to the UK's Independent, says he wants to tell women who may have been victims of incest that it's not too late to report the crimes. The project was inspired by the experience of a close friend, who was molested by her father at age 7, but didn't report it for 14 years.

Saint Hoax, the illustrator, says within a day of publishing the campaign on his website, he heard from a girl who decided to report her story.

Nouri al-Maliki's time may finally have run out

As ISIS advanced through northern and western Iraq over the past two weeks, Iraqi Prime Minister Nouri al-Maliki leaned even harder on his fellow Shiites for support. He took help from Iran, recruited thousands of Shiite volunteers to bolster the failing Iraq army and refused to consider appointing a more inclusive government to win back Iraq's disaffected non-Shiites. Now the Associated Press is reporting that that refusal may have cost him his job.

The US has already made clear that it wants a change of leadership in Baghdad, and Iran, Maliki's most powerful ally, seems to have also lost patience. The AP says that Iraqi Shiite parties have convinced senior Iranians that Maliki is now unacceptable and unable to muster any meaningful support. Iran will now reportedly decide on a replacement and present it to those Iraqi Shiite politicians.

Al-Shabaab is building a media empire in Kenya

In Iraq, ISIS militants have taken to social media to spread their message. In Somalia, terrorist group al-Shabaab, has instead created its own wide-ranging radio network that it uses to blast out propaganda. In a country where radio is by far the most influential and far-reaching form of media, al-Shabaab controls seven stations, mostly in southern Somalia.

It's also attempted to shut down other forms of competing media, both by harrassing journalists and confiscating satellite dishes and other equipment from ordinary Somalians.  PRI's The World created a series of maps to show the range of al-Shabaab's radio network and the areas where they've staged their increasingly deadly attacks.

Grab your surfboard and head for Iceland

European surfing is at its peak this time of year, with crowds around Portugal and southwest France, popular locations for surfing enthusiasts. But there's a last frontier for surfers, one that you wouldn't think of as particularly inviting or enjoyable: Iceland.

The Guardian went to Iceland for the surfing and found comparatively mild temperatures, 12 Celsius or 54 degrees Fahrenheit. It's not 80 degrees, like you might find this time of year off Hawaii, but it's warm enough. And in recent years it's been good enough to develop a small cadre of local surfers who are supplemented by surfers from a NATO air base.

A dinosaur park, rather than a hospital?

A Peruvian town is up in arms after its local official elected to turn land, and finances, earmarked for a much-needed hospital into a dinosaur park to attract tourists. In arid Yura, home to 15,000 people, diarrhea and kidney disease are major killers. So locals have been clamoring for a hospital.

But local and regional officials have decided to go a different direction. Global Voices looks at the decision to build the new amuesment park and what officials are saying to angry residents.

Fish prices in Australia are set to rise after wild weather has kept fishing trawlers from leaving port and bringing in their regular haul. High winds have made it too dangerous for boats to leave harbors in several coastal cities, the Sydney Morning Herald reports. Prices are expected to jump as much as 10 percent.