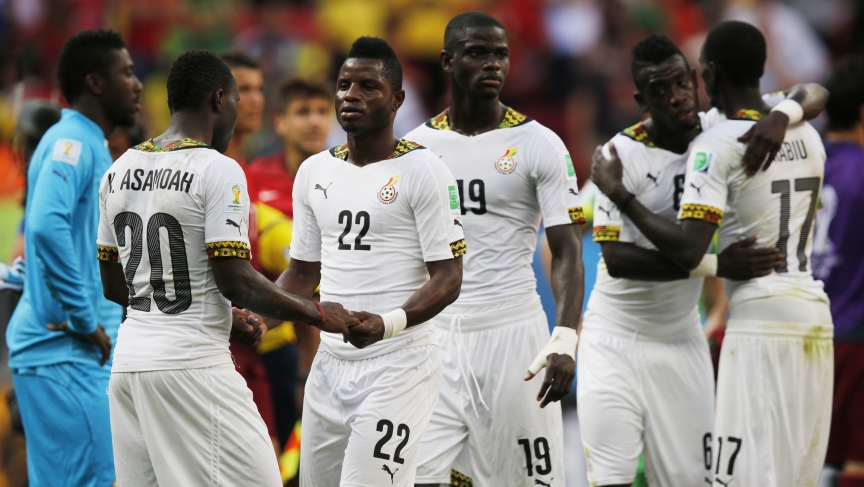 Ghana's players react after losing over Portugal during their 2014 World Cup Group G soccer match at the Brasilia national stadium in Brasilia June 26, 2014.

Ghana's World Cup came to a close today after a 2-1 loss to Portugal. It was sad news for Ghanaians, but the fact that their team played at all could be considered a victory.

A day before the do-or-die match, Ghana's players threatened to go on strike unless they were paid the bonuses they had been promised — in cash. They didn't trust their country's soccer officials to even make deposits in their bank accounts.

After Ghana's president's personally intervened, a plane carrying $3 million in cash took off on Wednesday, bound for the team's training base in Brasilia.

The story raised eyebrows both in Ghana and across the globe, but the chaos didn't stop there.

Both incidents made huge headlines back in Ghana, and they were not flattering for anyone involved.

Vera Kwakofi, Current Affairs Editor for BBC Africa in London, says the team "would have been booed" if the match had taken place in Ghana.

"There was a campaign to bring the boys back from Brazil because they did not want to support the team behaving as badly as they had," she says, adding that Ghanaians felt as though "their name has been dragged in the mud" by the team's showing.

"If they left the tournament early, they'd leave honorably," she says.

According to Kwakofi, people always rallied around the team to protect the name of Ghana but this time she believes they "have not endeared themselves."