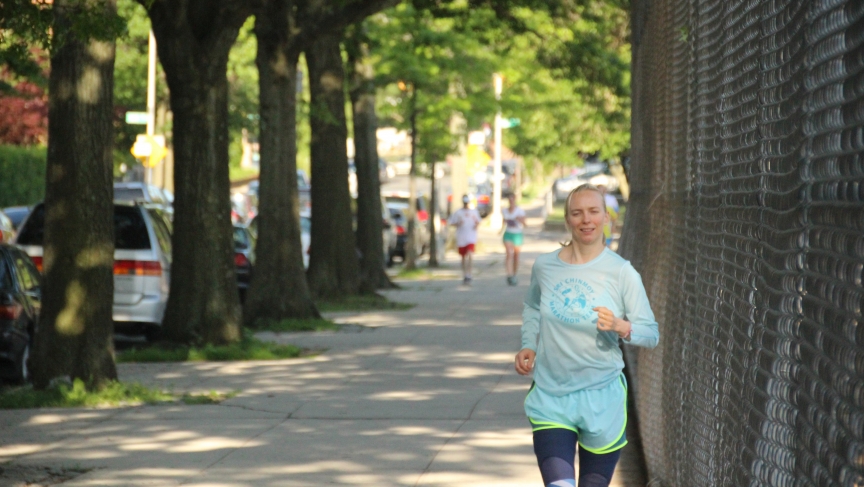 Jayasalini Olga Abramovskih from Russia makes a lap on the first day of the Self-Transcendence 3100 mile race. Runners alternate the direction they go around the block each day to avoid uneven wear on their bodies.

As the original field of 32 World Cup teams gets weeded to 16, a smaller — but similarly international — field of 14 different contestants are hard at it in the borough of Queens in New York City.

They hail from Russia, Ukraine, Slovakia, Bulgaria, Austria, Australia, Switzerland, Scotland and the US, and they’re in the middle of the Sri Chinmoy Self-Transcendence 3100 mile footrace.

There’s a lot of stuff that sets this race apart from your typical long-distance footrace. For one, it’s really long distance. As the name implies, it’s 3,100 miles. The runners go from six in the morning until midnight, covering 60 or 70 miles every day for a month-and-a-half.

And they do it all without leaving one city block. They go around and around — averaging somewhere around 110 times a day.

The race, and most of its runners, is inspired by the teachings of Sri Chinmoy, an Indian spiritual teacher who relocated to this corner of New York City in the 1960s and set up a school. Chinmoy urged his disciples to test the limits of what they considered possible.

“His philosophy behind putting on such long races was it gave runners an opportunity to go beyond what their conception is that their capacity is,“ says

Sahishnu Szczesiul, who’s been involved in the races since they began in the late 70s.

“He felt that people have unlimited capacity if they can tap into an inner resource. And when they become athletes, he always encourages them to be alert and to practice concentration while they’re running. Not meditating, because sometimes if you meditate you fly away and you can run into a lamppost,” Szczesiul says, laughing.

Chinmoy races got longer and longer and spread across the globe. This is the 18th year of the 3100, which calls itself the longest certified footrace in the world.

Chinmoy died in 2007, but he’s still everywhere at the race. His pictures and quotes adorn the starting line. And it’s his songs that a group called the Enthusiasm Awakeners sing to the runners each morning.

On day 10 of the race, the runners were working through some physical troubles. But, as you might have guessed, the real struggle is mental. Chinmoy races are, as followers say, as much an inner race as a physical one.

William Sichel, a 60-year-old from Scotland, has done a bunch of long runs. But he says that the duration makes this one totally different.

“It’s just relentless. You get up every morning and there’s a monkey in the corner: 109, 110 laps, you know. And you say oh God. But you try not to think about it too much — don’t obsess about the laps,” he says.

Instead, Sichel focuses on the minutiae of the course — the variation as he circles the block. “It’s like each side of the course feels a bit like a different world,” he says. “You got this piece here and then around there and around there. Especially when the light changes. It almost feels like you’re on a different course.”

This is Australian Sarah Barnett’s second go at the race. When she started last year she wished she was on a different course.

“The last year I got a bit depressed the first few weeks, because I’d go past this main road here and think, ‘Aw man I wish I was out in a forest. You know, it’s not exactly the scenic place,” Barnett says, chuckling as she runs along the side of the course with the most car traffic. “But I guess it’s not escaping modern life, we have to try and live in the world. So I guess we have to be able to meditate here, right in the middle of New York.”

Barnett was one of four runners who didn’t finish the race last year. But she ran 2,600 miles, and is going strong this year. A lot of the people who do finish it keep coming back for more. They say Chinmoy’s teachings about self-transcendence still drive them.

That night, a little after 11:30, the runners were making their last laps for the day. The fastest, Ukraine’s Sarvagata Ukrainskyi, was getting close to 700 miles.  At that rate he only has another 34 days, or 4,373 laps around the block.