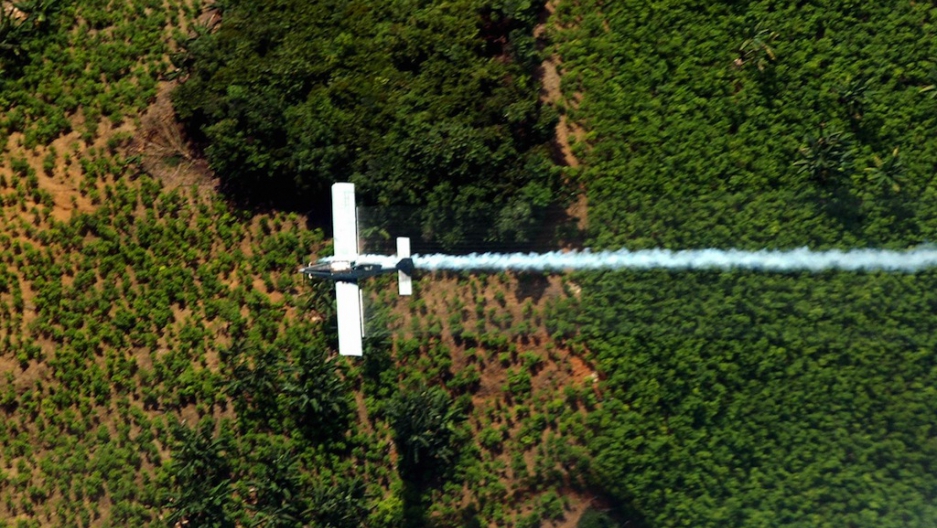 LIMA, Peru — The area sown with coca, the key ingredient in cocaine and crack, is at an all-time low.

That’s according to the United Nations Office on Drugs and Crime (UNODC), which released its annual World Drug Report Thursday, crediting the record to a 25 percent reduction in Colombia’s fields, one of just three countries where coca is grown.

Separate UNODC country studies published earlier this month, with 2013 numbers for Peru and Bolivia, suggest the trend has continued. Peru saw a 17 percent reduction last year, while Bolivia reported a 9 percent fall. (The Colombia 2013 country report is due to be published in the next few weeks.)

GlobalPost infographic: The UN says these countries smoke the most weed

But before “war on drugs” hawks start declaring victory — or cokeheads begin to worry — GlobalPost decided to take a closer look at the apparent milestone.

Can the numbers be trusted?

Not so much, say the experts.

Compiling the statistics involves law enforcement in a cat-and-mouse game with growers who naturally don’t want their crops to be discovered.

Most coca grows in densely forested, extremely dangerous Andean foothills. Much of the area is controlled — or at least patrolled — by trigger-happy leftist insurgents, the Revolutionary Armed Forces of Colombia (FARC) and remnants of the Shining Path in Peru.

As if that wasn’t bad enough, the figures are compiled jointly by the UNODC and national governments. Each country, of course, has an interest in underestimating its coca crops and overestimating the number of plants destroyed by law enforcement or the military.

“Peru got burned [in 2012 when it became the world’s top cocaine producer] and they are looking to improve their international reputation,” says Kathryn Ledebur, head of the Bolivia-based nonprofit Andean Information Network. She suspects that Colombia’s figures in particular are “grossly underestimated.”

But does this still mean less cocaine on the streets?

Even if the UNODC statistics are correct, all the independent experts GlobalPost spoke with doubted that they would translate to less Andean marching powder on the streets of New York, Los Angeles, Moscow, Paris or Tokyo. That’s for three reasons.

The first is that the drug cartels’ cocaine processing techniques have become much more efficient in recent years.

For example, they now use weed whackers to pulverize the leaves — rather than the previous method of treading on them — before soaking them in nasty chemicals, including gasoline, to extract the cocaine alkaloid.

Likewise, plant quality and strength have also improved dramatically, as the cartels have helped farmers to experiment with varieties and breed more productive bushes. According to Ricardo Vargas, a Bogota-based drug policy expert, some growers are actually able to produce twice as much cocaine from the same plots of land as 10 years ago.

Finally, simply counting the area sown with coca fails to take into account one of the biggest variables affecting the cocaine trade — the number of harvests per year.

Bolivia, Colombia and Peru are all tropical nations and, in theory, have all-year growing seasons. Nevertheless, there are huge regional variations, meaning that the annual number of harvests can range from three in Bolivia to as many as six in Colombia.

“You have to move beyond measuring hectares if you want to know how much cocaine is being produced,” Vargas says.

He also anticipated an uptick in Colombia’s coca acreage due to the suspension late last year of the US-backed fumigation program. That happened after the FARC apparently shot down two crop-dusting planes used to spray herbicide — in other words, highly toxic weed killer — on illegal coca plants.

More from GlobalPost: Colombia’s controversial coca spraying could be the next drug war casualty

At least Washington must be pleased, right?

The Obama administration has yet to comment. But based on past experience it is unlikely to be applauding anything Bolivia does when it comes to fighting the drug trade.

This is hardly the first time the impoverished Andean nation has reduced its coca harvest. But leftist president — and former coca growers union leader — Evo Morales has long sparred with the United States, which even forced his presidential plane down last year over incorrect suspicions that it was transporting US intelligence uber-leaker Edward Snowden.

Bolivia’s anti-drugs czar, Sabino Mendoza, for one thinks Washington should acknowledge his country is close to ceasing exporting significant quantities of coca-derived drugs.

Mendoza calculates that Boliva requires 14,700 hectares of coca to meet traditional, legal demand, with locals chewing the leaf or using it for tea that generate a mild high and can treat fatigue and altitude sickness.

With a national total of 23,000 hectares of coca at the end of 2013, that means that Bolivia now has less than 9,000 hectares supplying the cocaine cartels.

“This is the third year running that we have reduced cultivation,” Mendoza told GlobalPost. “Despite our successful policies, the US continues to act politically against us. They should be applauding us.”

Indeed, the White House has even faced suggestions of cooking its own estimates of Bolivia’s drug production figures. In 2010, it calculated that the country produced twice as much cocaine per acre as Colombia.

That even prompted Adam Isacson, of the Washington Office on Latin America, a progressive think tank, to note: “We want to think that these numbers are not pulled from the US anti-drug bureaucracy’s nether regions.”

It’s hoped the UN wouldn’t do anything like that, either.

But looking purely at coca fields may do little to help gauge the real amount of cocaine and related drugs actually flowing out of the Andes.