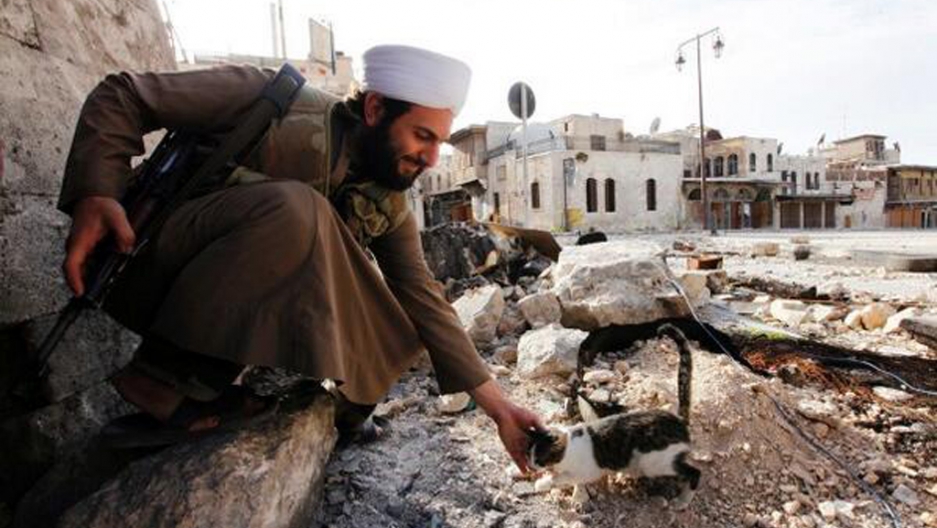 BEIRUT, Lebanon — “Just don’t make us out as if we’re beasts and terrorists, you know? We’ve got families like you, we’ve got sisters like you, and you’ve probably got brothers like me.”

Despite his earnest tone, there aren’t many who have a brother like Abu Sumayyah.

An ethnic Kashmiri raised in the UK, Sumayyah has been living in Syria for about a year and recently pledged allegiance to the Islamic State in Iraq and the Levant (ISIL or ISIS), the powerful Al Qaeda-inspired group making gains in Syria and Iraq.

After discussing his reasons for waging jihad in Syria, Abu Sumayyah was keen to make sure I left the interview with a positive impression of ISIL. “Be a good journalist and portray the truth, not what [others] want you to portray,” he said.

Like Sumayyah, ISIL members — from the leadership down to supporters abroad — are using social media to propagate a carefully-crafted narrative about ISIL. In the process, they’ve made themselves increasingly accessible online by tweeting, following, direct-messaging — and even in some cases successfully manipulating — foreign journalists.

ISIL on the web

Other jihadist groups have made use of online platforms, including Facebook, independent forums and Twitter, but ISIL has earned a name for having the most internet success so far. The group has added Android apps, professionally shot and edited videos, and multilingual media outlets to its online arsenal — not to mention their own line of commercial products.

“We are here to show Muslims that we are fighting for the caliphate ... restoring glory, honor, dignity, and equality to the Islamic nation,” said Abu Bakr Al Janabi, a dedicated ISIL supporter living in the EU who often translates and re-posts the group’s statements.

“[ISIL] fights on behalf of the Islamic nations, so they need very strong media.”

Aaron Zelin, an analyst at the Washington Institute for Near East Policy, says Al Janabi, and others like him, are part of a broad yet relatively centralized network of online ISIL amplifiers. The network centers on three official media outlets: al-I’itisam, Ajnad, and al-Hayat for multilingual updates.

“Under that, there are key influencers, who are members of the organization in Iraq or Syria, pushing specific content to grassroots supporters,” Zelin said.

Then come the “foot soldiers in theater”: ISIL’s fighters in Iraq and Syria who regularly tweet about their experiences and talk to other fighters online. “From there, you have the fanboys in the Western countries that are online cheerleaders,” Zelin added.

On the one hand, key influencers and foot soldiers have published horrifyingly gory images of decapitated heads, crucified men and piles of bodies after cold-blooded executions.

The executions of the captured iraqi army soldiers, the cowards dressed like civilians to avoid ISIS pic.twitter.com/E9UPtKrJd7

On the other, foreign fighters in Syria and Iraq have tweeted photos of half-eaten Snickers bars, fried chicken meals, and kittens.

Milk for the kitties pic.twitter.com/fjdR0nhUFb

ISIL wants to be both loved and feared, he said. In tweeting “relatable” images of food and cute animals, as well as evidence of the group’s extensive social services programs, ISIL aims to “reassure the people that they’re going to take care of them in a strictly Islamic way.”

The brutally violent videos and overtly sectarian rhetoric, however, are crafted as implicit threats to the group's online adversaries. “The beheadings and executions in public are both messages to ISIS enemies, but also part of Shariah [Islamic law],” Al Janabi said. “Most criminals don’t want to end up in ISIS videos.”

“It’s the perfect sociopathic image,” said Phillip Smyth, a University of Maryland researcher. “[ISIL] wants to say that they’re acceptable to Western outlets. It doesn’t mean that this acceptability transcends their violence: they combine both things.”

Are journalists to blame?

ISIL isn't only trying to win hearts and minds in Iraq and Syria — viewed by the group as Islamic states-in-waiting — with its "lovable" image. It is also aiming for Western journalists online.

Al Janabi (who describes himself on Twitter as “friendly like a Scottish fold”) said he followed my account, which features a picture of me with uncovered hair — not wearing the uber-modest clothing required of strict Islamic code — because he is tolerant.

“Roses are red, violets are blue. Once you are in ISIS area, niqab will be waiting for you,” he said, and then insisted he was joking. He said people with different ideas should be able to talk to each other — as long as they are fair, don’t attack Islam and don’t manipulate the truth.

Seeing recent news of how the media propaganda is talking bad about ISIS and that we are killing everyone and no one likes us.

Zelin, the analyst, said ISIL members are extremely calculated in their effort to court Western journalists. “It’s completely intentional. They want a more sympathetic message out there,” he said. They are able to get their message out to a larger audience by speaking English, being friendly, and agreeing to interviews.

And there's nothing wrong with that. The problem is when journalists stop thinking critically.

Some reporters are too eager to get an “exclusive” with an ISIL member, and refrain from asking tough, potentially offensive questions. “There’s very little pushback, and [ISIL] knows how to take advantage of that. Who wants to burn a source?” asked Smyth.

“At some point, if we continue like this, they don’t even need their social media presence — we’ll do their propaganda for them,” van Ostaeyen noted.