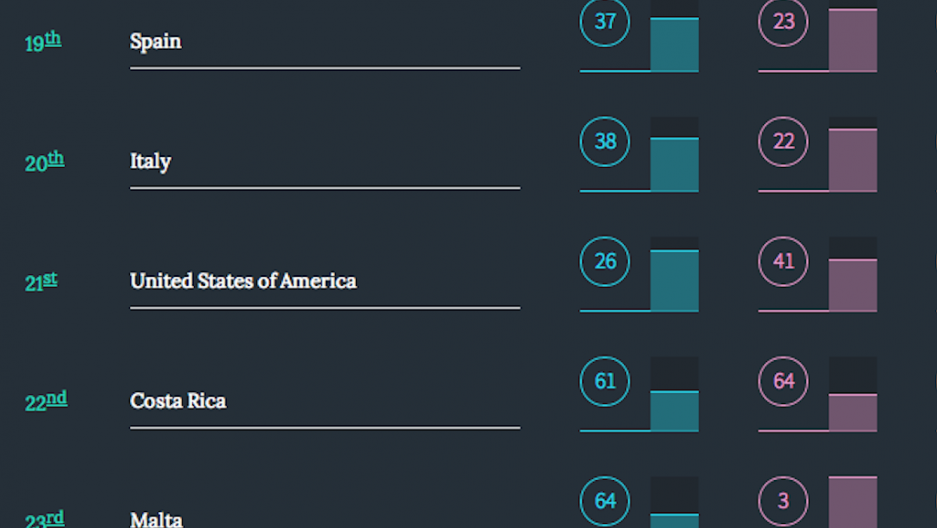 Sure. we can measure objective things like infant mortality rates and alcohol use until our almanacs are bulging. But who’s going to have the guts to compile a weirdly arbitrary infographic ranking which countries do the most for the world, and which ones we could really do without? The answer is independent policy advisor Simon Anholt, who has put together the Good Country Index so we can sort out the good world citizens from the countries that need a time out.

The Good Country Index aims to order the globe based not on which countries are the best or healthiest or safest places to live, but which ones contribute the most to the global good. Accordingly, it ranks each nation on its contribution to science and technology, culture, international peace and security, world order, planet and climate, prosperity and equality, and health and wellbeing. You can see how countries rank overall, and how they rate in each separate category, and you can also see the sub-rankings that lead to their overall category score (for instance, “world order” breaks down to charity giving, refugees hosted, refugees generated, population growth, and UN treaties signed). But you may not see the data that Anholt incorporated into his conclusions. Though we are assured that there are 35 datasets, and that they are “reliable.”

So this is probably not a good guide for, say, policy decisions. (“Libya, you scored terribly on the Good Country Index! Get off the Earth!”) But it could spark some interesting conversations about priorities: Is a nation’s contribution to culture really as important as its contribution to prosperity and equality? Should “peacekeeping troops” count toward a country’s “peace and security” score? Does it make sense to weight CO2 emissions the same as other greenhouse emissions? Is it fair to rank very poor countries on charitable contributions? (There’s an easy answer to that one, actually; for some indicators, the score is proportional to gross domestic product.)

But okay, some of you don’t want to deal in subtleties. You just want to know which nations to praise and which ones to scold. Keep your shirt on: here’s your top and bottom 10.

For more information on how countries shake out in the subcategories and sub-sub-categories, you can spend ages playing around with the rankings here.