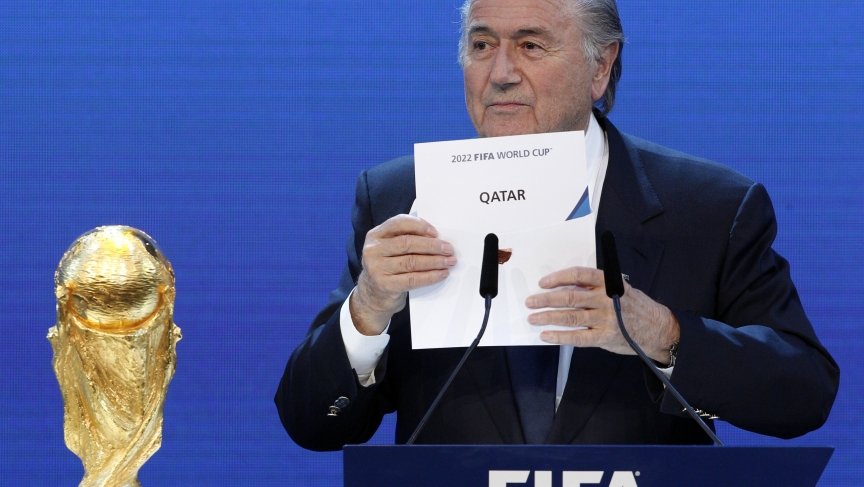 FIFA President Sepp Blatter announces that Qatar will host the 2022 World Cup. The choice has come under growing fire as corruption and labor abuse allegations have mounted.

We're not even finished with the first round of the 2014 World Cup, but controversy is already growing about a tournament eight years away.

The 2022 World Cup will be held in Qatar. Now, amid growing reports of abusive labor practices and allegations of corruption and bribery in the tiny Persian Gulf country, lawmakers in Washington, DC, are calling for the tournament to be moved. And they're just the latest high-profile voices to pile criticism on top of the controversial World Cup host.

From the start, the vote in favor of Qatar was dogged by allegations of corruption. This weekend, The Sunday Times of London published a report contending that a former FIFA executive bribed various senior soccer officials with as much as $5 million to vote for Qatar.

"A fellow named Mohamed Bin Hammam, who was a Qatari soccer official on one of the World Cup panels, was basically greasing a lot of different FIFA officials," says Todd Zwillich, The Takeaway's Washington correspondent. "He was also mixing some of it with oil deals with Qatar and other countries, like Thailand, to try and sweeten the pot to get their votes for Qatar for 2022."

Zwillich says the newest charge drove Washington lawmakers toward the fight to move the 2022 World Cup to a new location. One of them is US Senator Bob Casey (D-Pa.).

"He's fired off a letter to FIFA saying, 'Hey, you guys should vitiate this entire thing — let's have a redo,'" Zwillich says. "The United States was second in the voting back in 2010, so this good senator would like to have matches in Philadelphia or Pittsburgh instead of way over in Qatar."

According to Zwillich, Sen. Casey's issues with Qatar hosting the 2022 World Cup go beyond corruption — he's also concerned about the poor labor standards there. Qatar imports foreign workers for construction projects like the 12 stadiums it must build from scratch to host the tournament. Those workers enjoy few rights, and media outlets have already documented hundreds of deaths due to World Cup projects.

"They import most of their workers, and the labor laws in that country are such that we've seen a lot of reporting of, basically, conditions that are akin to indentured servitude," Zwillich says. "Bob Casey is not only from union-friendly Pennsylvania, but he's also chairman of the labor subcommittee on [the Senate Committee on] Foreign Relations, so these international labor issues are right over the plate for him."

"[FIFA] should do one of two things," Sen. Casey says. "Either make the determination that United States, as a second place finisher, should host the World Cup, or have another vote and start over. But the idea that a country that has those two basic problems would host the World Cup just doesn't make any sense at all."

But because of the close relationship the US has with Qatar, Zwillich says challenging the hosts could be a bit complicated. The US has a large airbase in Qatar, and the five Taliban officials freed by the US in exchange for former prisoner of war Bowe Bergdahl are being held there.

"Is this really a time to be poking Qatar with a stick?" Zwillich wonders. Some may argue that rocking the boat with Qatar is a foolish move, but Sen. Casey believes it can be done while maintaining the American relationship with Qatar.

"I think our government will do a good job of enforcing that agreement, which is a very tough agreement that was negotiated based upon our national security concerns," says Sen. Casey. "But I think we can still raise very serious and troubling concerns about labor law violations and the treatment of workers."

Sen. Casey says that the Qatari Ambassador to the US is interested in discussing the issue, though Zwillich did not hear back when he contacted the embassy for a comment.