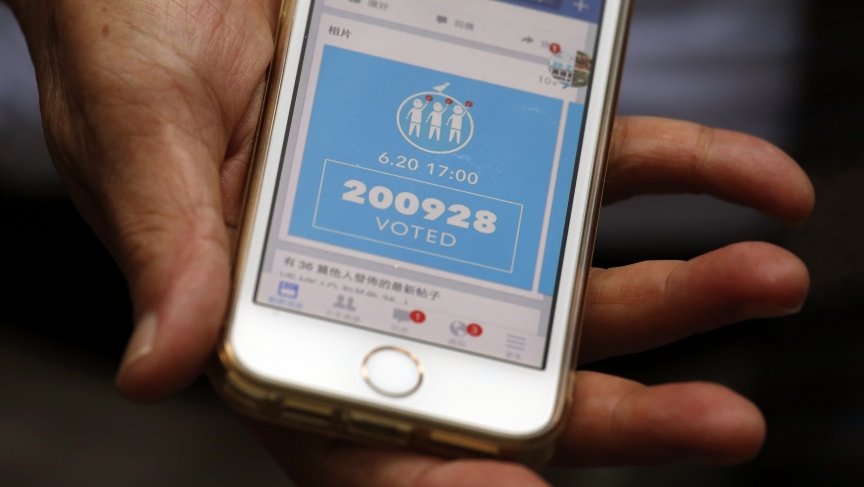 A Hong Kong resident shows a Facebook page announcing the number of votes in the city's unofficial pro-democracy referendum. Many Hong Kongers believe Beijing is trying to undermine the vote with Internet attacks.

On June 19, Facebook suffered a worldwide outage for a half-hour. Not a big deal, right? Wrong — at least in Hong Kong.

The outage hit a nerve in the city, where some pro-democratic reform websites have recently suffered massive distributed denial-of-service, or DDoS, attacks suspected to be the work of mainland China.

Hong Kong is currently holding an unofficial referendum on electoral reform, meant as a polite demand to Beijing for greater democracy. Since June 14, the referendum's online voting platform has suffered outages thanks to attacks involving ten of thousands of computer networks throughout the globe.

Another round of DDoS attacks paralyzed the website of Apple Daily, one of the few mainstream media outlets critical of the Beijing government. During the 10 hours when Apple Daily was offline, the newspaper posted their news updates on Facebook, YouTube and Instagram.

Hong Kongers believe Beijing is behind the attacks. The referendum advocates the people's right to nominate candidates for the city's chief executive, while China says Hong Kong's constitution — the Basic Law — requires that a committee do the nominations. Beijing has promised a direct vote in the next chief executive election, but Hong Kong residents fear that they will still control the election using the committee loophole.

At the same time as the attacks, Chinese media outlets have repeatedly blasted the referendum as an illegitimate act. In a typical comment, the state-run Global Times said that "opposition groups should stop having the illusion of succeeding in this farce."

Despite the backlash from the mainland, 700,000 people have voted in the referendum so far.

With the attacks as a backdrop, Facebook's temporary outage made many Hong Kongers anxious. Yuen Chan, an experienced journalist and journalism lecturer in Hong Kong, captured the sentiment in her blog:

But in the seconds that followed #Facebookdown, something strange, though predictable happened in Hong Kong. First of all, people thought the short must be directed at Hong Kong. They muttered about dark forces, hacking, the hand of the state.

When it could no longer be ignored that the outage was global, the questions turned to “what are we going to do now?” and even “are there going to be riots?”

She further explained why Hong Kongers feel so desperate when Facebook is down:

[I]n Hong Kong, there was something else at work. People weren’t just upset that they couldn’t see what their friends ate for lunch.  They were concerned about the loss of an important platform for the exchange and dissemination of information and a tool for social mobilization.

For some reason, Twitter has never really taken off in Hong Kong, and Facebook is the social media platform of choice for everyone from K-pop chasing teens, to their mums and dads; from radical activists to their opposite numbers on the pro-government side.

That means Facebook is where people share news, views and gossip on politics and social movements in a city where social and political tensions have rarely been higher.

A post from blogger “Dead Sister Still Alive” (姐死姐還在) about “The end of the world without Facebook” echoed Yuen Chan's concern about censorship and freedom of expression:

The moment when Facebook was down, I was terrified [...] “What if there is no more Facebook? The World Ends”. Were I not in the office, I would have screamed. […]–> WhatsApp on my mobile kept buzzing, my friends were all horrified and they wanted to double check that the situation was happening to other people too. For ordinary working people, being without Facebook as like cutting a space mission off from Earth. [...]

While my sister is concerned about why her Facebook game has vanished, many Hong Kongers are anxious about online surveillance and censorship. People have to suffer before they develop an awareness about social issues and pay attention to what happens in this society. […] Whether or not it is Internet surveillance at work, who knows? But it is a rehearsal of “what if we don't have Facebook anymore?” The situation is horrifying. I have to treasure the moment when we can still speak out. When the Internet is certified dead, everything will be too late.

Immediately following the attack, speculation about China's possible involvement took off. According to an expert from Taiwan, the Facebook downtime corresponded to a sudden barrage of traffic from China to the United States. Another Internet security expert said Facebook was under a large-scale DDoS attack, in which many compromised systems assail a single target.

But Facebook later blamed the outage on a software update issue. With tensions between Hong Kong and China still high, however, that may not be much comfort.