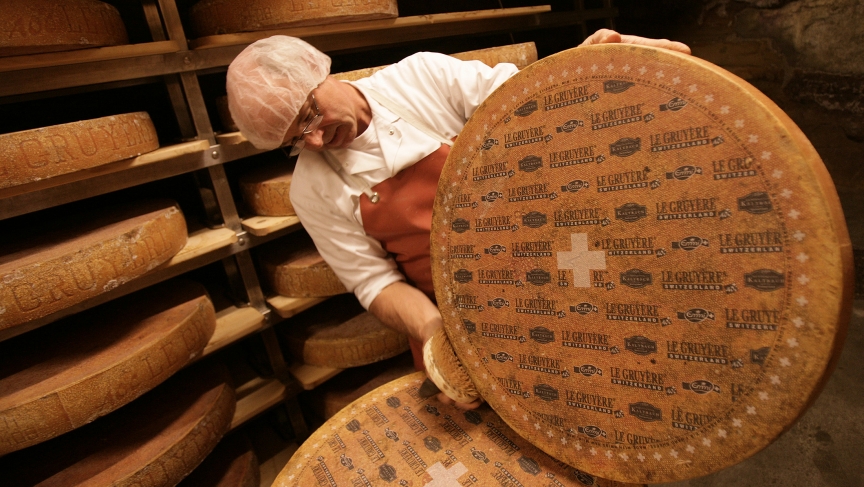 A Swiss cheesemaker inspects a large wheel of cave-aged Gruyere cheese. Such cheeses can be windows into the culture and geography of the places where they're made.

Ask Matt Rubiner to explain how he got into his current job, and even the backstory is cheesy.

Rubiner is an artisanal cheesemonger from Great Barrington, a small town in the Berkshire Mountains of western Massachusetts. His interest in the art of cheesemaking runs deeper than pure chance or a slow fastball: Rubiner says a cheese can tell you a surprising amount about the people and place that produced it.

"When I see a piece of cheese, it's just a pure expression of the place from which it came," he says.

That means learning about the geography of a region and which animals can thrive and produce dairy products. In some areas it's cows, in others goats or sheep.

But there's also centuries of history involved. In Southern Italy, he says, farmers couldn't raise cattle because of the poor quality of the land. And because they were never invaded by Saracen armies, which brought goats along with soldiers, the only animals available were sheep. So even today, the region produces sheep cheeses like pecorino.

"You can taste the pecorino and you're tasting history, you're tasting culture," Rubiner says. And the opposite goes for other regions as well. "You go the Loire Valley in France and each town has its own wonderful little goat cheese with its whimsical shape — a pyramid, a log, a little disc. And you taste these things and you understand history and then you realize that the goats weren't indigenous to this place. They were an introduction of the invading armies."

It dovetails nicely with Rubiner's love for military history. He was once a military policy analyst, working for defense contractors on "mostly technology sort of stuff. You know, what's the newest and greatest weapon the Chinese were coming up with.

Rubiner says he enjoyed the work, but as he prepared to leave the world of military analysis, "there wasn't a central passion that you had, and I was like, 'Oh, I've gotta do something else. What am I gonna do?'" A field where you could identify "battles of the same names as the cheeses" was a good fit.

"I don't want to sound too pretentious, but it speaks of a tradition," he says. But in the United States, it's a tradition that's under threat. Last month, the Food and Drug Administration ruled that the central act of artisanal cheesemaking, the aging of cheeses on wooden boards, didn't meet food safety standards.The FDA later said it was not issuing a ban, but the future of the ruling is still uncertain.

So for now, Matt Rubiner will continue playing out the history of centuries past on his cheese boards in Massachusetts.