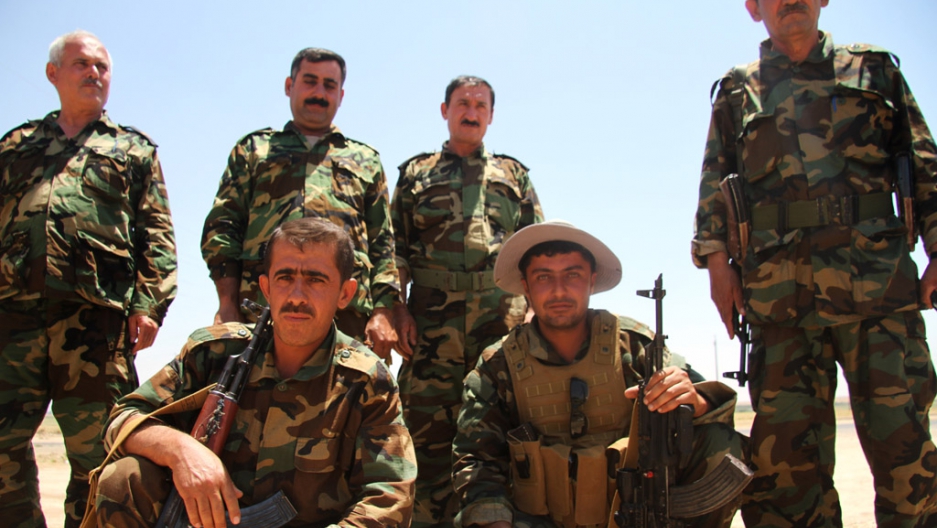 Peshmerga fighters stand on the edge of a small outpost on the Western outskirts of Kirkuk, just a few kilometers from the frontlines with ISIL. The men here say if it weren't for the Peshmerga, ISIL would have taken control of Kirkuk as well as Mosul and Tikrit.
Credit: Susannah George
Share

KIRKUK, Iraq — At a peshmerga outpost on the western outskirts of Kirkuk, talk of battlefield strategy in the fight against Sunni militants quickly devolves into trash talk about their supposed partner in that fight: the Iraqi military.

"They're not fighting, they're just falling down," Qurshed Ismahil, the senior commander at this small base, says, disparaging the Iraqi military's performance over the past two weeks.

"Of course they lost Mosul, they just left everything and ran home."

His men, sitting around him on foam mattresses under a makeshift awning, nod in agreement.

"There is no more Iraqi military," laughs one man. "It's just a name, that's it."

The Iraqi army's mass desertions in Mosul and Tikrit allowed the Islamic State of Iraq and the Levant (ISIL, also known as ISIS) to establish a foothold in the two key northern Iraqi cities from which they've continued to advance on the capital, capturing a number of key border crossings in recent days.

In oil-rich Kirkuk, as the military melted away, it was the Kurdish security forces, also known as the peshmerga, who stepped in. They claimed the long-disputed territory as their own, edging Iraq's semi-autonomous Kurdish region the closest yet to independence.

Kurds make up 15-20 percent of the Iraqi population. They are ethnically distinct from Arab Iraqis, and though mostly Sunni they have shown few signs of siding with the Sunni militants, preferring to defend the autonomy they secured in 1991.

Their land grab of Kirkuk during the first days of a swiftly moving crisis left many in Baghdad stunned. Immediately, tensions spiked between the Kurdish leadership and Iraq’s central government.

"The Kurds have taken advantage of the current situation," Mohammed Sadoun, a lawmaker from Prime Minister Nouri al-Maliki's Shia-led block, told the Associated Press. He called their moves a "plot," and warned that it would "lead to problems."

For now Iraqi military and peshmerga forces are fighting side by side in some places, mainly in Diyala province just south of Kirkuk and east of the capital. Commanders say the forces also share intelligence and coordinate battlefield logistics.

Regardless, many in Baghdad still feel betrayed, accusing the Kurds of taking advantage of a moment of national weakness for personal gain and separatist ambitions.

More from GlobalPost: The 5 big winners in Iraq, land of opportunity

"You always have these people who try to excuse their dismal failures by blaming others," says Najmiddin Karim, the governor of Kirkuk, in response to criticism from Baghdad. "The Kurds have nothing to do with the army falling apart and leaving without a fight," he said.

Instead of accusing the Kurds, Karim says Iraqis should hold their military leadership responsible.

"These are the people who have failed to do anything for the country … the commanders who have been in charge of the army for several years, wasting billions of dollars."

Karim admits the Iraqi military and the Kurdish security forces need each other, at least at the moment. "We know this is a fight we all have to cooperate together on to win."

But despite public declarations of partnership, some Iraqi soldiers speaking in private concede the relationship is increasingly strained.

"It's not great," says one Iraqi soldier of his brigade's dealings with the Kurdish security forces. "The peshmerga, they don't trust the Iraqi army," said the soldier, who spoke on condition of anonymity because he was not authorized to speak to the press.

"This is a long-standing issue," explains Ken Pollack, senior fellow at the Brookings Institution and an Iraq expert. "The Iraqi army has always tried to assert control over the entirety of Iraq and there have been long periods of time when Kurds were fighting the central government," he said, referring to clashes in the 1960s through to the '90s.

The Iraqi army has always seen the Kurdish security forces, along with the territorial integrity of the Kurdistan region, as a threat, Pollack says.

“This is a moment when logic would suggest that the Iraqi army is going to show restraint to the peshmerga," Pollack reasons, explaining that Baghdad has its hands full as they fight ISIL. "You would think they would not be looking for yet another enemy."

But "let's remember this is the Middle East and this is Iraq and people don't always behave the way that logic would suggest that they ought to," he adds.

On the political front in Erbil, the capital of Iraqi Kurdistan, top Kurdish leadership is digging in, declaring that Kirkuk will not return to central government control.

"We never have any doubt at any time that Kirkuk is part of Kurdistan," Iraqi Kurdish President Massoud Barzani told CNN, citing "new developments" in Iraq that brought about a "new situation of Kirkuk coming back to Kurdistan."

On the ground in Kirkuk, Peshmerga forces toe a similar line, making themselves comfortable in bases and offices once used by the Iraqi military.

At the Kirkuk airbase, English signage still hangs beside buildings, remnants from when US forces occupied the post, then called Forward Operating Base Warrior.

In front of the main administrative building, red, white and black Iraqi national flags decorate a row of abandoned Iraqi armored vehicles. But inside, it's the red, green and white of Kurdish flags that sit on either side of Brig. Gen. Ayoub Yousef Sa'id's dark wooden desk.

"When we got here there wasn't a single soldier," Sa'id says. He claims his troops moved into the air base to prevent looting, not for strategic purposes. "We told the Iraqi military, we're not looking for any problems with you," he says.

Just outside his office, his men have converted a small exercise room into a lounge, pushing treadmills and weight benches off to the sides to make room for couches and a coffee table. "The equipment was old," explains one man in military fatigues smoking a cigarette on an overstuffed sofa.

Unlike some of the antagonistic statements coming from Kurdish leaders, Sa'id's are measured, cautiously dodging questions about the future status of Kirkuk. "We aren't going to a next step, we are just holding our line for now," he says of future aspirations for independence.

But when asked how it feels to see Kirkuk under Kurdish control after so many years, his emotions betray him.

"Kirkuk is why I'm here," he says, leaning forward over his desk, one arm extended. It was dreams of bringing the city under Kurdish rule that spurred him to enlist in the peshmerga 14 years ago.

"Every battle I've fought has been for Kirkuk," he says solemnly, "from my first to my last."