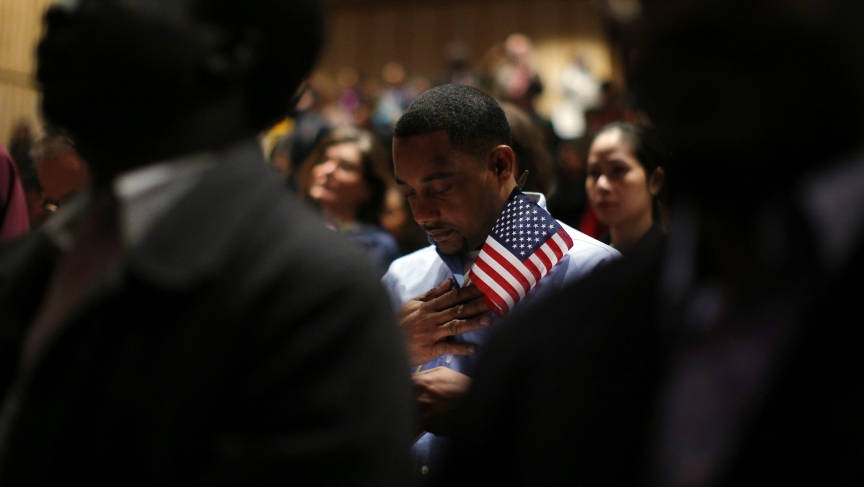 Immigrants stand for the invocation during a naturalization ceremony to become new US citizens in Boston in 2013. Massachusetts is home to thousands of refugees, but the mayor of Springfield says refugees are draining his city's resources.

The city of Springfield, Massachusetts has welcomed refugees from all over the globe. Right now, it’s home to about 1,500 of them.

But the city’s mayor is saying that number is more than enough.

Mayor Domenic Sarno, a Democrat, wants the federal government to freeze refugee resettlements to Springfield. In a letter to Massachusetts members of Congress, he said the new residents, many of whom are from war-torn Somalia, are putting an unmanageable strain on the city’s public services.

Springfield, the third largest city in Massachusetts and an old industrial center, has been beset by economic difficulties for years. A third of the population lives below the poverty line, a rate three times higher than the state average. It also has the second lowest per capita income of any municipality in the state.

But many refugee advocates and social service organizations are saying Springfield’s refugees shouldn’t be made into scapegoats for the city’s economic woes.

“It’s a position that we believe is somewhat overstated,” said Bill Ames, a senior vice president at Lutheran Social Services (LSS), one of the two organizations that receives federal dollars to help settle refugees in Springfield. Refugees currently make up about one percent of the city's total population.  “In a city of that size, a few people moving into neighborhoods to work and be with family — we don’t think that that creates this burden.

Manchester, New Hampshire, and Lewiston, Maine are also home to large numbers of Somali refugees. In 2011, Manchester mayor Ted Gatsas asked the State Department to halt refugee resettlement in order to focus energy on the city's existing immigrants, though no policy change has been reported.

Most resettlements in these communities are based on family reunification. And regardless of where they are officially placed by the State Department, said Ames, new refugees will move to where their family members live.

Sarno's letter last Thursday is similar to a letter to the US State Department last summer, in which he claimed that Springfield was being "disproportionally targeted for the settlement of refugees."

In his letter, Sarno wrote that public schools were overwhelmed by the influx of non-native English speakers, and were being forced to divert funding "that was intended for use for assisting existing pupils" to provide services for the new students. He also said the Springfield Police Department reported an increase in crimes like fraud and robbery committed against the refugees.

However, Ames said there has been no evidence of a crime spike. "Any time a situation like this comes up, you worry about the misinformation and misinterpretation of information that comes out," he said. The Springfield Police couldn't be reached for comment, and Sarno declined to comment.

At the same time Sarno was renewing the call to halt refugee resettlement in his city last week, he achieved a victory on another front: the Massachusetts gaming commission recently approved a deal with MGM to build an $800 million casino in Springfield. Sarno has been pushing for a gaming deal for the past two years. He told the Boston Globe that the new facility will provide much-needed blue- and white-collar jobs.

There are no specific statistics on employment levels for refugees in Springfield, though a 2014 US government report ranked Massachusetts third in the nation for refugee employment. The study said 73 percent of refugees that had enrolled in state programs found work.

"Refugees have been shown, in different cities across the country, to provide an economic stimulus," Ames said. "Refugees are a real asset to the community."