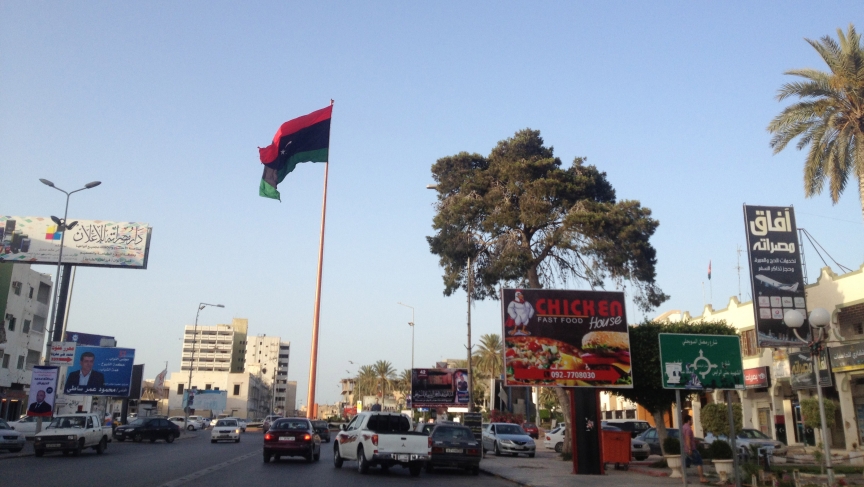 Misrata's main roundabout at Tripoli Street was the epicenter of the battle for Misrata in 2011. More than three years later, it's a sign of the city's prosperity.

Libyans are going to the polls Wednesday to elect new representatives. Many hope the new congress will bring stability after months of turmoil, especially in eastern Libya.

Separatist claims and labor strikes at oil refineries there have caused Libya’s oil production — the driving engine of Libya’s economy — to plummet. Libya’s barrel per day output is less than a fifth of what it was a year ago.

In this grim picture, one city is faring better. Misrata was one of the hotspots of the 2011 revolution. It’s now Libya’s fastest growing market.

At a bird shop in downtown Misrata, owner Mohamed Shirkes flaunts the new gem of his collection: a green, yellow and blue-faced Amazon parrot.

His name is Ako and he would be the most expensive item in stock, if it weren’t for a whole different kind of commodity.

He’s talking about AK-47s, not birds.

Ako, the parrot, and the assault weapons sell at the same price, about $1,200. Unlike exotic birds, trading Kalashnikovs isn’t exactly legal. But for a businessman like Mohamed it’s a no-brainer.

“Basically after the revolution, that’s what people wanted to buy,” he says. “To this day, the profits from weapons are a lot more than what I get from my birds! So 95 percent of my income now is from the weapons. The birds are more of a cover.”

But so far, things have worked out. Partly, he says, because he’s careful about who he sells weapons to; partly because he comes from a powerful family and tribe that offer protection.

And partly because, in Misrata, commerce is king.

“From the day I was born, I definitely remember Misrata as being business all the way. We’ve always been businessmen I guess,” says Mohmed Eltumi, the chairman of the Libyan Business Council, based in the city.

“I remember people always telling us about gold in the west Arab region coming from Saudi Arabia through Misrata and then being distributed to not only the rest of Libya but the rest of the western Arab region. So it’s always been a sort of crossroads for merchants,” Eltumi says.

And now, Misrata is the rare bright light in Libya’s wobbly economy.

The port city hosts the only tax-free zone in the country. Its international airport keeps expanding, bringing in more and more investors — especially from places like Turkey, just a few hours’ flight away.

But none of Misrata’s prosperity would be possible without security. Since the end of the revolution, entrepreneurs have joined together to support a unified security force. And so the city became safer than most, which has further fuelled Libyan and foreign investments.

Toyota’s Libyan headquarters is based in Misrata’s free zone.

Ahmed Sadawi, the local Toyota dealer, says business has never been better: sales have tripled since 2009.

Things could be erratic under the Gaddafi regime, to say the least.

The revolution created a more stable legal environment, but also new challenges. Ahmed says Misrata’s marketplace doesn’t exist in a bubble. Security may be good here, but whenever there’s trouble elsewhere, his business takes a hit.

“Unfortunately, Toyota cars are easy to steal. So a lot of people refrain from buying certain models because they are in demand here. We get a lot of customers complaining that they’d love to buy certain models and don’t because anytime they could be driving anywhere, they could be pulled over and carjacked,” Ahmed says.

Sadawi says the market will only reach its full potential when Libya as a whole enjoys the same stability.

Anwar Suwan became one of Misrata’s most prominent businessman during the revolution. He was the ultimate go-to-person for rebel fighters, and had even printed a special business card.

He chuckles when he reads the card: “Suwan for revolutionary services.”

Those “services” were keeping the frontlines fully stocked with everything from tuna to guns.

Now he’s using his clout and network for another kind of fight: against what he sees as widespread corruption in Libya’s central government.

“That’s the problem we’re facing right now in Libya. Even in high ranking positions, in ministries, there’s a lot of money that’s just gone missing. So although we’re not involved in the state and we’re not there in person, we’re not just going to let people get away with things if we can stop it,” Suwan says. “We keep an eye on everything, all the ministries, all the finances. It’s the guys who are going for millions. They’re the ones we try to stop.”

At night, Suwan and some friends meet up to talk about trade, politics and the upcoming elections while cracking open some fresh almonds.

One of them wonders aloud whether Libya is on the “right track.” They seem to think their city is. As for the rest of the country though, they’re not at all sure.