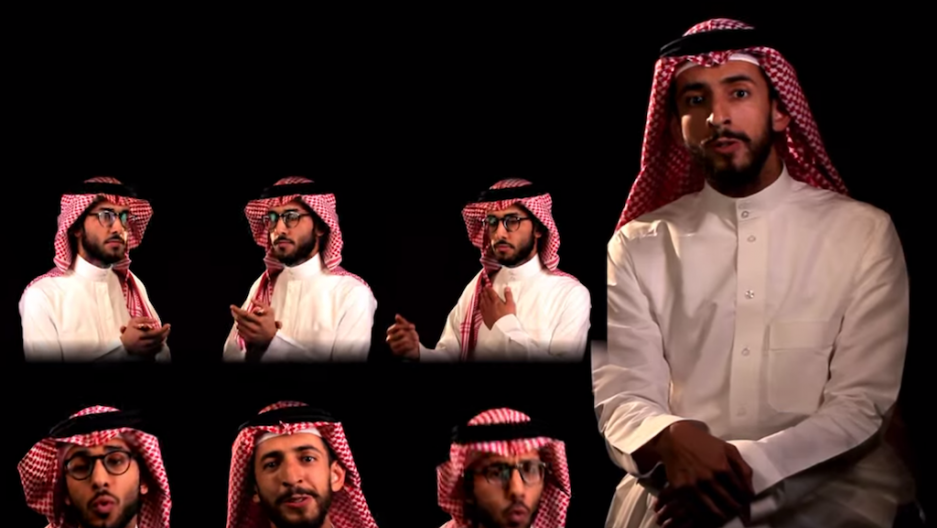 The "No Woman, No Drive” video by Telfaz11 starts with Hisham Fageeh telling viewers that he’ll perform his version of Bob Marley’s “No Woman, No Cry” song “with words relevant to my culture but without musical instruments.” The parody of Saudi Arabia's ban on female drivers has had more than 11 million views.
Credit: Screen Shot
Share

This is Part Four of a five-part series.

“He was like, ‘Yeah, you guys are doing a great job, everyone can see that, keep up the good work!’” recalled Ali Attas, 24, a director at UTURN.

There could be no higher endorsement for UTURN. Prince Miteb, after all, is a son of Saudi Arabia’s reigning king. His brief visit also was an implicit recognition that comedy, once suppressed by the ascetic, dour version of Islam dominant in the kingdom, is now out of the closet.

Young Saudis are overwhelmingly devout and observant Muslims. But they no longer feel, as did many of their parents, that they should minimize or avoid recreational activities, such as listening to music, acting onstage or telling jokes to an audience out of fear that they will be distracted from their religious duties. This shift away from public austerity is part of a new understanding among Saudi youth of what Islam means for daily living.

“Islam will never forbid you from laughing, or talking about things that happen in your everyday life,” said Ahmad AlKashakri, UTURN’s marketing director.

Saudis of course have always had a sense of humor. But starting in the 1980s, the very conservative Saudi approach to Islam known as Wahhabism began exerting greater control on the kingdom’s public sphere. It urged Saudis not to get interested in anything that might divert them from thinking about and worshipping God. For example, it taught that music is forbidden and that women should be covered from head to toe to fingertips.

Just four years ago, a senior cleric who told a Saudi newspaper that there “is no clear text or ruling in Islam that singing and music are prohibited” had to retract his words after receiving harsh criticism from his peers.

This austere religious stance made for humorless public life and very limited entertainment possibilities. Comedy was missing in action on state-run television. Books on non-religious topics were censored. Drama clubs at universities were shut down. Even today, the kingdom has no movie theaters.

Satellite television, and later the Internet, changed all that. Now, a generation of young Saudis raised with the Internet is using it for entertainment, social commentary and comedy.

“The things we used to do before behind closed doors now we can do it in front of a camera and it goes on YouTube,” said Abdullah Mando, 28, one of UTURN’s founders.

Saudis are one of the most wired populations in the world, and spend more time per capita watching YouTube than any other national population. They also are among the top users of Facebook and Twitter — the latter displaying large doses of Saudi sarcasm and irony.

An upshot of all this online exposure is a growing openness among many Saudis.

“We’re becoming more open in all aspects of life, not only religiously,” said Mando. “It’s because of the way that the world has changed. It’s really forced us to question our identity [and] one of them is religion.”

Mando, who founded UTURN in 2010 with two friends, views this as valuable.

“I think today our faith is kind of stronger, because it’s challenged,” he explained. “For the first time now we question why we do these things. So if you’re a person who fasts, or prays, you’re more likely doing it because you believe in it more than because everybody else does it. If you don’t do it, it’s because you don’t believe in it anymore.”

UTURN’s Jeddah offices, located in a nondescript office building, feature floor-to-ceiling windows that look out over rooftops in this seaport town. Men are dressed in casual, Western-style clothes, though female employees wear the enveloping black robe and cover their hair. Brainstorming for new material is done while slouching on comfy sofas.

The name of the company, Mando wrote in an email, was chosen because it “represents the return, hopefully to something great. Most Arabs are proud of their history, so returning to it, to us, is a good thing.”

Mando said he and UTURN’s other founders all have studied outside the kingdom, adding that “a lot of the kids who work here are people who studied abroad at a certain point in their life.”

The popularity of the company’s comedic creations, as well as those of several other YouTube video production companies, signals that religiously dictated solemnity has dropped a peg.

Some of the best-known shows are “La Yekthar” (“Keep a Lid on It”), produced by Fahad AlButairi of Telfaz11, another production house, and “Al Tayer” (“On the Fly”), in which UTURN’s Omar Hussein portrays a fake newscaster. Another UTURN show, Eysh Elly (“What Is”), directed by Attas, satirizes Arab online videos. One episode in 2013 had more than 5 million views.

These shows have made fun of Saudi officials, the media, government regulations and the national air carrier. They have mocked people’s manners during prayer time in mosques, the ban on female drivers, the morals police, and a judge who defended himself against graft charges by saying he was possessed by the devil.

Satirizing religion directly, however, is still a red line. But because many mores and social habits zapped by Saudi humorists are intertwined with religiosity, they often convey an implicit critique of Wahhabi austerity.

For example, the now famous “No Woman, No Drive” video by Telfaz11 starts with Hisham Fageeh telling viewers that he’ll perform his version of Bob Marley’s “No Woman, No Cry” song “with words relevant to my culture but without musical instruments.” The parody of the ban on female drivers has had more than 11 million views.

UTURN director Attas said he and his colleagues don’t spend time worrying about whether their humor is too provocative. “We don’t have a limit that says, ‘Okay you cannot say that.’ Every time we do something we will just test it to see the reaction of the people. And based on that, we will do the next step,” he said.

If the reaction is negative, “we don’t take the video down, but in the next video we’ll be more careful of what we’re gonna say because now we know if we say that [again] it will be really bad for us."

Recently, a Saudi official told the Associated Press that the government is thinking about regulating Saudi-produced YouTube content so its creators are “aware of the boundaries of society and [do] not exceed those boundaries.”

UTURN is “not too concerned about limitations,” Mando wrote in an email. “We believe there is always room for creativity and storytelling no matter how small the canvas is, but we would rather know where the canvas ends so we don't paint on the wall.”

In any event, he added, UTURN “is known for being extremely respectful [of] Saudi laws and traditions.”

If such regulation does come to pass, it is not likely to be very effective. Young Saudis are adept at getting around online censorship. And their aspirations are different from those of previous generations, as was evident from a sentence scrawled on a window in UTURN’s office.

“When your dreams conflict with your freedom,” it said, “it’s the right time to wake up.”

Part Three: The rise of atheism in Saudi Arabia, where talking about atheism is illegal