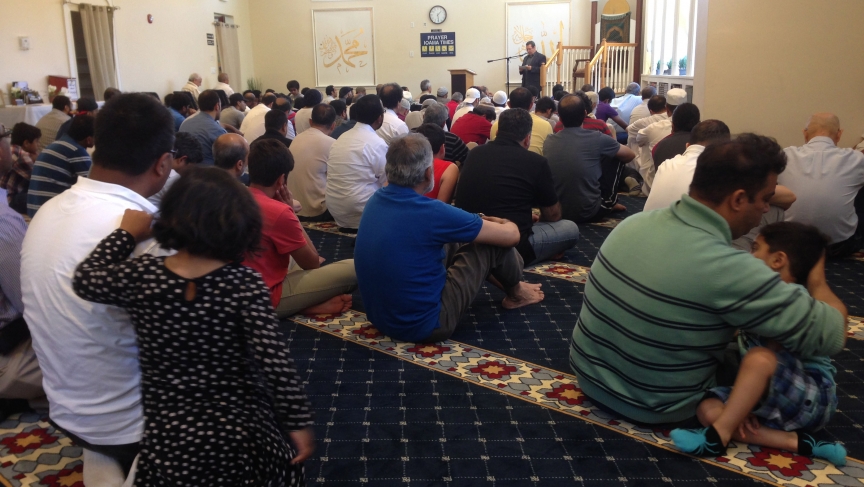 The Yusuf Mosque is in a former VFW building in the Brighton neighborhood of Boston. Congregants are an incredible mix of Muslims from a host of different countries.

Many Iraqis say they didn't always see a Sunni-Shia divide in their country. But there is now. So why there are such divisions in the Middle East, while here everyone does seem to just get along?

I went to the Yusuf Mosque in the Brighton section of Boston to find out. The mosque is an almost shocking mix of cultures in a city that often seems fairly uniform.

Drive by on a Friday afternoon - prayer day - and you'll see men and women from across the Muslim world, from Indonesia to Iraq to North Africa, in a wide variety of dress.

There are jeans and t-shirts, jalabiyas, shalwar khemeez, headscarves and niqabs.

I chatted with a few men at lunch after services to ask them the question: Why do the different Islamic sects seem to get along here, but - in extreme cases - kill each other back home?

"In Iraq or in Syria or Yemen or Libya, people are looking for power," said Anwar Faisal who is Palestinian. "And when you have the power you have the wealth, you have loyalty. Our mentality as a Middle Easterns, we're people who love power."

Faisal said many of the Muslim nations remain third world countries without rule of law or effective government institutions. So they're vulnerable to unscrupulous leaders who divide people along religious fault lines.

In the US, he said, people may call themselves liberal or conservative, but they don't care who you call God.

"The people here, the people of America, they believe they're under one God. it doesn't matter what God you're praying for. You can have a temple you have a mosque you have a church. Also, here we're under one flag and that is the key. It makes this country the most beautiful country on the planet," Faisal said.

Yusuf Nasrullah, from Pakistan, adds that a national identity supercedes a religious or tribal one for Muslims in the US.

"They have lived with non-Muslim communities, they can give and exchange and they're like, 'okay, you have your right as a minority, I have mine and we are all contributing.' That is what keeps people humane and civilized in this part of the world," Nasrullah said.

"Why do people get along here when they come to this country, when they immigrate to this country?" asked the mosque's Iman, Ismail Fenni, from Algeria. "I think it has a lot to do with when you're a fish out of your bowl, you do a lot to survive. And I think it's true about anyone, any ethnicity, regardless of religion. You try to make do until you get back to your fishbowl."

Fenni said it may take the Muslim world generations until their different fishbowls are free from religious violence.

But hey, said Riyad Tubaishat from Jordan, America had its own problems back in the day.

"Keep in mind, America, how long it took. We had a big civil war here. Keep in mind most of these countries right now, they're very new to political structure. They didn't have enough time and they have so much outside influence," Tubaishat said.

It's been hundreds of years since the US shook off a colonial power... These men say you gotta give Islamic countries some time to catch up.