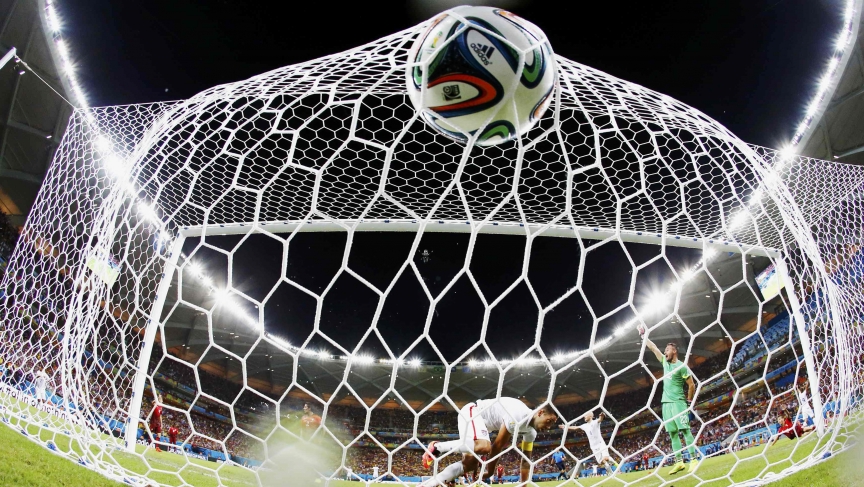 Clint Dempsey, center, of the US knocks the ball into the net to score against Portugal during their 2014 World Cup Group G soccer match at the Amazonia arena in Manaus.

It was a gut punch of historical proportions.

The US was just seconds away from winning 2-1 against Portugal on Sunday. A victory would have given the US team not only a guaranteed spot in the next round of the tournament, but a massive upset and the distinction of being the only American squad to win two group stage matches at the World Cup.

But with less than 30 seconds to the final whistle, Portugal scored. The huge win became a disappointing draw. Now, America's fate hangs in the balance.

Reporter Anders Kelto watched the nail-biting game from his apartment in Cape Town, South Africa. Kelto is a lifelong soccer fanatic. He played for the US Men's Under-17 team and Brown University, and has also coached college soccer.

Naturally, he's been following the World Cup closely. Despite the last-minute twist on Sunday, he says the outlook is still positive for the Americans.

“The good news is the US controls its own destiny,” Kelto says. “They have one remaining game against Germany, which is the best team in the group.”

If the US wins or ties against Germany they will move on to the next round. But if the US loses, things get complicated: the US will then have to depend on a good result in the game between Ghana and Portugal to see if it survives.

“It would be best for there to be a tie in the other game,” Kelto says. He mapped out the US team’s odds on his Facebook page:

So, the World Cup uses goal differential as the first tiebreaker, rather than head-to-head competition. That means....
* If the U.S. gets a win or a tie against Germany, the U.S. advances.
* If Portugal and Ghana tie, the U.S. advances.
* If Portugal beats Ghana by one, two, or three goals, the U.S. would advance if they lose to Germany by fewer than four, three, or two goals respectively.
* If Ghana beats Portugal by one goal and the U.S. loses to Germany by more than one goal, the U.S. will not advance.
* If Ghana beats Portugal by two or more goals and the U.S. loses to Germany, the U.S. will not advance.

Last night’s scenario in Manaus didn’t exactly surprise Kelto. It seems to be part and parcel of the US team’s narrative going back many years.

“The US soccer fan in me, and all of us, is conditioned to expect the worst. So when we gave up that late tying goal with less than 30 seconds to go, in a way that wasn’t surprising,” Kelto says. “It would’ve been too easy to get two wins and be on to the next round. That’s just not how US soccer works.”

Conspiracy theories have already begun to bounce around over the upcoming US match against Germany on Thursday. Both teams would advance with a draw, and some fans suspect that the American and Germans will play defensively instead of trying hard for a win.

“I can’t see that happening,” Kelto says. “Both these teams have a lot of pride. They’re competitors they want to win. US World Cup soccer games are almost always exciting, end-to-end affairs, and I somehow feel like the game Thursday is going to be another one of those.”