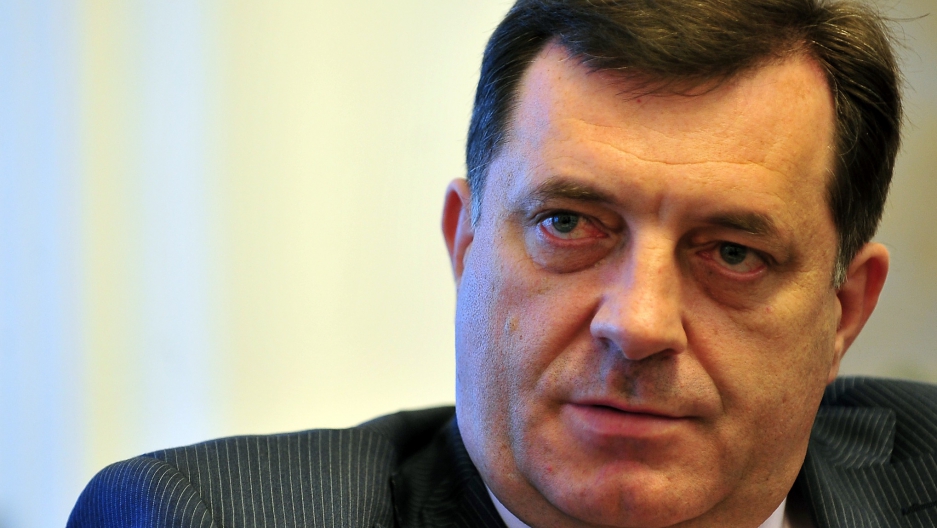 Elderly men trade moves on a life-size chessboard across the road from the magnificent, gold-capped Serbian Orthodox Cathedral of Christ the Savior, which was destroyed by the Croatian Fascist Ustase during World War II. Further down the street, a Partisan monument honors 21 men and women who died fighting the Nazis.

But although the names of the Partisan heroes are Serbian, Bosniak (Slavic Muslim) and Croatian, Banja Luka is overwhelmingly Serbian today.

It’s the capital of Republika Srpska — one of the two main entities that form Bosnia-Herzegovina — where Serbs make up around 90 percent of the 1.3 million-strong population.

Serbian flags fly from almost every lamppost and attitudes seem to be hardening.

That wasn’t the hope when Milorad Dodik became president in 2006 with Western backing as someone who would be able to marginalize Serb hard-line nationalists.

Rather than improving relations between the Serb republic and the Bosniak and Croat-dominated federation that comprises Bosnia’s other half, Dodik has pushed the two entities created by the 1995 Dayton peace accords further apart.

The broad-shouldered, barrel-chested former prime minister has threatened to declare independence from the rest of ethnically fractured Bosnia, calls he’s stepped up since the onset of the crisis in Ukraine.

And he’s cracking down on the opposition at home.

After anti-government protests swept across Bosnia earlier this year, Dodik’s party, the Independent Union of Social Democrats, released a book titled “The Destruction of Republika Srpska” that described critics as puppets of foreign powers committed to destroying the Bosnian Serb republic.

Among those labeled “traitors” was Aleksandar Trifunovic, founder of Buka, a popular online news portal based in Banja Luka.

He made his name with daring exposes of corruption and graft. “We try to open people’s eyes,” he says. “That's why they say we're traitors.”

Republika Srpska is one of Europe’s poorest states. Per capita GDP is just $4,100. More than half of young people here are unemployed.

But as an investigation published by the website the Balkanist earlier this year showed, Dodik and the Serb republic spend more on lobbyists than almost everywhere else in Europe.

Critics say Dodik has also tried to strengthen his grip on power with a dispute over funding after disastrous flooding in May that left at least 25 people dead in Republika Srpska.

The Bosnian Serb leader accused his Bosniak and Croat counterparts of attempting to take more money than they were entitled to from flood relief funds.

Civil society activists say Dodik and other local politicians are using the “ethnic card” to divert attention from the social and economic ills afflicting the country.

“If you make any criticism, you'll be accused of being against the national interest, that you're working against Republika Srpska,” says Miodrag Dakic, an environmental campaigner based in Banja Luka.

More from GlobalPost: Good to be the king? Spain's Felipe IV takes the throne.

Overshadowing everything here are an upcoming election in October and the question of independence.

Any declaration to leave Bosnia-Herzegovina would lead to another conflict, says Srecko Latal, a Balkans analyst based in the Bosnian capital Sarajevo.

“Dodik is trying to sell the idea to the people of Republika Srpska that the chance of independence is good enough that they don’t need good job or social services,” he says.

With Scotland due to vote on independence from the United Kingdom in September and secessionist movements building elsewhere in Europe, Dodik may feel increasingly emboldened to try to go it alone. Especially since he looks set to lose the presidency in October.

“For Dodik, any option is better than been being replaced in an election,” Latal says.

If he loses, Latal adds, “he’d probably end up in prison.”