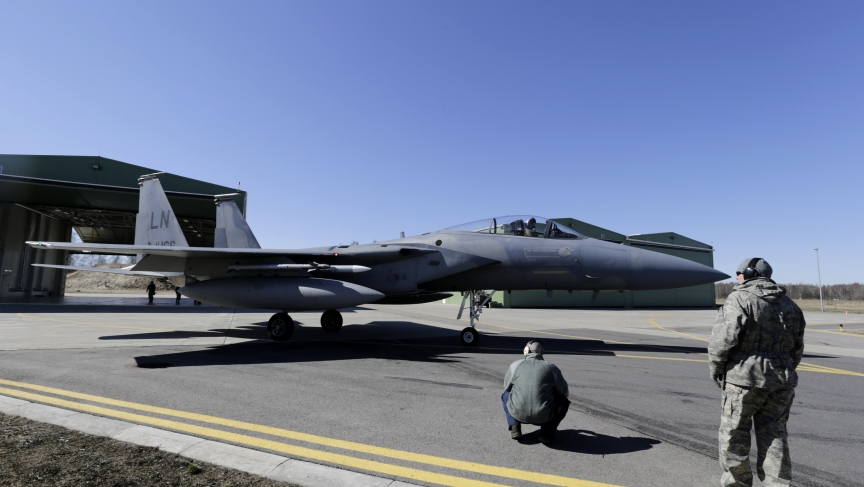 A US Air Force F-15 fighter moves onto the ramp to take part in a patrol during a joint NATO military exercise in Lithuania earlier this year.

Russia's annexation of Crimea and the ongoing tension in Ukraine have given new urgency to the NATO alliance — particularly in the Baltic states.

Estonia, Latvia and Lithuania are NATO members and all share a border with Russia and are home to ethnic Russians. If Russia were to try expanding into the Baltic states, NATO would presumably come together to fight back.

But NATO isn't as strong as it once was. Of the 28 NATO members, all but four have fallen below the guideline of investing 2 percent of GDP in defense spending. Only the US, UK, Greece and Estonia meet that threshold. According to The Guardian, the US and UK argue that Russian has steadily modernized its forces and can deploy more rapidly than NATO. So when NATO foreign ministers meet in Brussels over the next two days, the US and UK will be pushing other members to pledge increases that would show Moscow the alliance is serious about checking Russian aggression.

The US was still fighting Britain, even during the Civil War

Officially, Great Britain was neutral during the US Civil War. But, tacitly, the government was supporting the Confederacy — a major source of cotton for British mills and a major purchaser of finished British goods. Historians estimate that British support added two years and 200,000 lives to the war.

Now, researchers have discovered the headquarters of the British gun-running operation, revealing just how far the country was willing to go to support the Confederacy. The Independent has the story and photos of the discovery.

Scientists hope to bring back the American chestnut

For centuries, American chestnut trees were the "redwoods of the east" — towering at least 80 feet into the air when mature, and with diameters of nearly 10 feet. But a disease, accidently imported from Asia, ravaged them early in the 20th century. Some trees have survived, especially outside their native range, and now scientists think they are close to creating a new hybrid of the American chestnut that is blight-resistant.

PRI's Living on Earth reports that scientists have crossed the American chestnut with a Chinese chestnut. Their first target is to reforest the strip-mined hills of Appalachia.

The People's Daily  wants to have its dogs, and its dog meat, too. The Chinese practice of eating dog meat is reviled in much of the Western world and has been losing favor in China, but many Chinese remain adamant about this culinary tradition. Attempting to thread a needle on the practice, the Communit Party's main newspaper wrote that dogs can be man's best friend, and man's dinner.  But that compromise seemed to please no one.

The South China Morning Post parses the editorial and looks at the scuffles that went on at this weekend's dog meat festival.

Hebrew is an ancient language with a lot of tradition — and a lot of words. But, to date, it's never had an ultimate dictionary — a dictionary that serves as the source on the language. Something like the Oxford English Dictionary, in Hebrew.

PRI's The World in Words podcast looks at some of the ways Hebrew has evolved over the years — and the effort to capture it all in a dictionary.

As June enters its final week, the Atlantic Ocean has yet to produce a hurricane. And, it would seem, there are no systems with immediate prospects for developing into a tropical storm. Storms are actually more common in the western Gulf of Mexico — and this year, that hasn't happened either. AccuWeather breaks down the conditions for tropical storm formation.