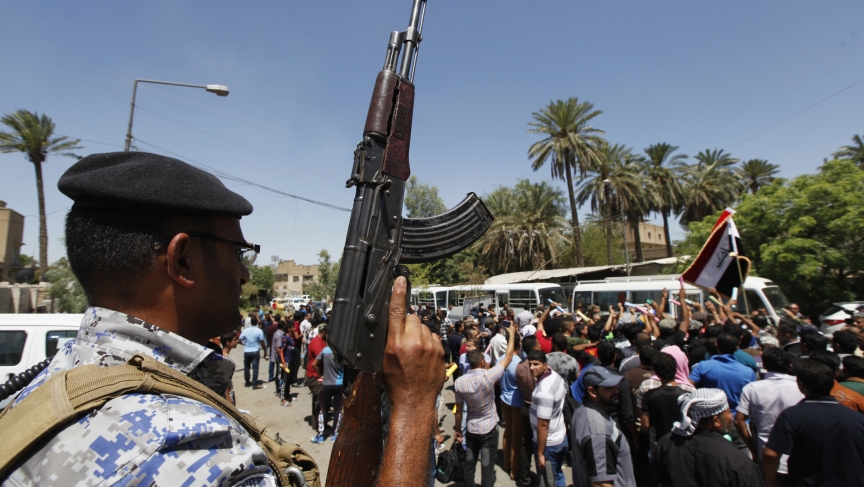 A member of the Iraqi security forces stands watch over Shiite men who have volunteered to fight ISIS. While the Shiite militias have helped boost numbers in the fight against jihadis, their loyalty to the government of Prime Minister Nuri al-Maliki is questionable.

The news in Iraq keeps getting worse for the beleaguered government of Prime Minister Nouri al-Maliki. After taking control of large swaths of northern Iraq, the jihadi fighters of ISIS have now seized the western province of Anbar, the largest in the country and home to most of its Sunni Muslim population.

"Certainly there's been almost a clean sweep by the militants in this province of Anbar," says the BBC's Richard Galpin from Baghdad, "and they are taking more and more towns, heading toward the western side of Baghdad."

The seizure has essentially eliminated Iraq's border with Syria, which sits in the areas now controlled by ISIS. The group also reportedly took over several border crossings with Syria and Jordan.

It has also given ISIS another direction from which to threaten Baghdad. A prominent sheikh who spoke to Galpin says Sunni fighters are likely to reach the capital city soon. "The decisive battles are going to come in the days ahead," Galpin reports. "And he was saying that the next battle will be at the gates of Baghdad."

Some alarm in Karbala as Iraqi army loses ground in west, opening another approach for ISIS. Shiite fighters rushing to the frontlines today

But if that sounds like a scary prospect, the sheikh says many locals aren't convinced that the situation is dire. Unlike in the north and west, the Maliki government has a stronger base in Baghdad and the south, where his fellow Shiites dominate the population. He and Shiite religious leaders have succeeding in calling out hundreds of thousands of volunteer fighters to support the Iraqi army.

"I think there are plenty of people who are skeptical about it because they think they will not be able to launch any kind of successful offensive," says Galpin. "Not only, of course, do you have a lot of troops but there are a very large number of Shiite militiamen. ... So it would be an enormous battle if the Sunni militants try to break in, but they may try."

Galpin says he attended a rally over the weekend for one of the largest such groups, Jaish al-Mahdi, at which tens of thousands of fighters showed their support while "armed to the teeth with every single different type of weapon you could imagine." But just who they're supporting is unclear. While Shiites may help in the battle against ISIS, they may not help Maliki in his fight to stay in power.

"The people there we interviewed were saying, 'we don't take our orders from the Prime Minister Nouri al-Maliki, even though he's a fellow Shiite,'" Galpin says "'No, we do not. We take our orders only from our leader.'"

They're not the only ones whose support for Maliki appears limited. Secretary of State John Kerry flew to Baghdad on Monday to meet with Maliki, and discuss American support. President Barack Obama announced last week that he would send 300 military advisors to Iraq to assist Iraqi security forces. He is also considering using American warplanes to launch airstrikes against ISIS.

"The Iraqi government is desperate for the United States to intervene militarily," Galpin says.

But in his remarks in Baghdad, Kerry distanced the prospect of American aid from Maliki's government itself, stressing the need for more inclusive leadership. "The support will be intense, sustained, and if Iraq's leaders take the steps needed to bring the country together, it will be effective," Kerry said, but cautioned that American assistance shouldn't be mistaken for "support for the existing prime minister or for one sect or another.”

The remarks might be a sign that the United States is actually hoping to see Maliki step down in favor of a less divisive prime minister.

"Some of the signals we've heard is that the Americans, in some ways, would be not unhappy if he were to be removed from power," Galpin says. "The question, though, I think, at the moment for the international community and the sort of senior political leadership here is, who would replace Nouri al-Maliki?

It's a good question, he says, and there isn't yet a good answer.

"At the moment, there aren't really sort of very clear figures who stand out as being potentially much more inclusive," Galpin says. "There are some names being bandied around, so let's see."