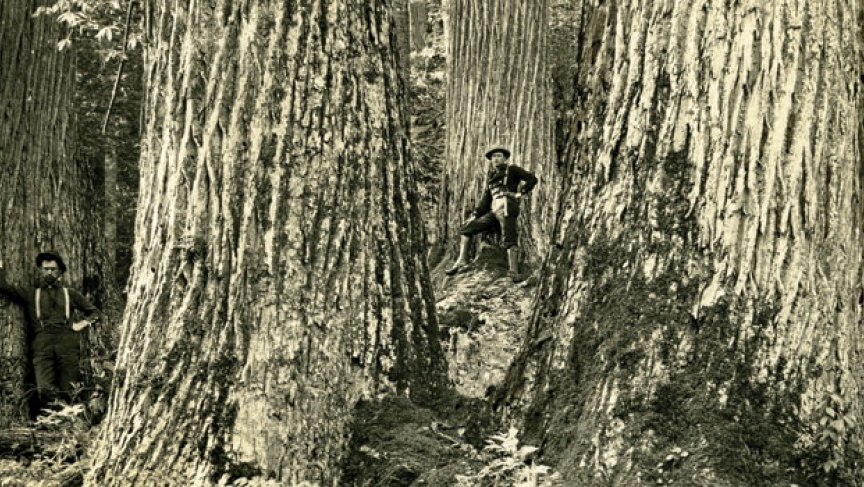 The American chestnut, once known as the “redwood of the east,” could grow to 80 feet tall. Now it is virtually extinct.

Thick stands of tall chestnut trees, sometimes called the “Redwoods of the East,” once made up nearly a quarter of the forests in the Eastern US.

Then a blight, inadvertently imported from Asia in the early 1900s, wiped out nearly 4 billion of these trees. Now botanists are working to bring back the American chestnut by breeding them to be resistant to the disease.

In the hills of Appalachia, which were largely deforested in the quest for coal, the return of the American chestnut would be a welcome sight.

“The old-timers used to say that when the chestnuts were in bloom in June and July it looked like the ridge tops were covered with snow because of all the chestnut flowers,” says Michael French, a forester with the American Chestnut Foundation.

These days those ridge tops look very different. The chestnuts are gone. Across Central Appalachia an area larger than the state of Rhode Island — nearly three-quarters of a million acres — has been strip-mined for coal.

Dave Fisher, a farmer and small business owner who has worked in coal mining for much of his life, has seen how mining changes the landscape.

“You would have huge tracts of land that had all the dirt and rock and trees and everything removed, and it was flattened out,” he describes. “You’re talking a quarter acre wide, a mile or two long of just big open fields.”

As environmental awareness grew in the 1970s, the government passed key laws like the Surface Mining Control and Reclamation Act, or SMCRA. The laws forced coal companies to fund the cleanup of abandoned mines and the reclamation of active mine sites.

“OSM and SMCRA had the belief that a surface mine, when reclaimed, should be smooth as a baby’s bottom, as it were,” he explains. But smoothing out the land compacts it, making it unfriendly to new forest growth.

Dave Fisher says the coal companies wanted to reclaim the land as quickly and cheaply as possible. “They just wanted the dirt to stay in place for five years so they could say ‘we've done our part, there’s a hillside back and it’s yours.’"

Fisher also says these restoration efforts didn’t make use of native plants and failed to understand historical land uses and the culture of rural residents.

“When you look at a place that is undisturbed in this area,” Fisher says, “the plethora of wildlife and the different nut trees and the different essential plants that we have here — at one time people made their living from collecting ginseng, and yellow root and bloodroot. And none of that is ever put back on the mined land. Very seldom is any of the hardwood put back.”

Hardwood plantings are now increasing, thanks to the efforts of universities, environmental groups and landowners. Some are hoping to restore former mines using native species — including the American chestnut.

Fred Hebard, chief scientist with the American Chestnut Foundation, says the chestnut tree was once a staple of life for people across Appalachia.

When an Asian fungus called Cryphonectria parasitica was accidentally brought to the US in exotic trees and shrubs from Japan, the American chestnuts began to die off with startling speed. Within 30 years, the fungus spread from Maine to Louisiana, killing nearly every American chestnut in its path.

Scientists have worked to bring the tree back since the 1930s, but it wasn’t until the 1980s that scientists started "backcrossing" the American chestnut with the Chinese chestnut, a relative that is resistant to the blight.

“The only thing you want from a Chinese chestnut is the blight resistance,” says Fred Hebard. “You want to retain all the other characteristics of the American chestnut.”

The backcrossed chestnuts at the American Chestnut Foundation research farm, in Meadow View, Virginia, are essentially 15/16 American and 1/16 Chinese. Using trees bred at the farm, scientists are planting what they expect are blight-resistant seeds and saplings in former and active coal mines.

“When you look at the range of the coalfields and the range of the American chestnut, the two overlap almost perfectly,” French says. “So if we can establish founder populations throughout the chestnut’s range on surface mines, it may help us to reach forests that we might not otherwise be able to plant in.”

So far, tens of thousands of Chinese-American chestnuts have been planted. Early data suggests that well over 80 percent of the chestnut trees are surviving. In a few years scientists expect the chestnuts will start producing seeds to grow a second generation of trees.

“As somebody who grew up here, I see everyday the tremendous need for physical work for people to be engaged in,” he says. “Not only for the money aspect, but also to give people something to do and a sense of cultural identity. Because as the coal mining is moving away from this area, moving out west to Montana and Wyoming, we’re left with a big question of what we do. To me there’s a big opportunity to get people back to work doing restoration and remediation of these lands.”