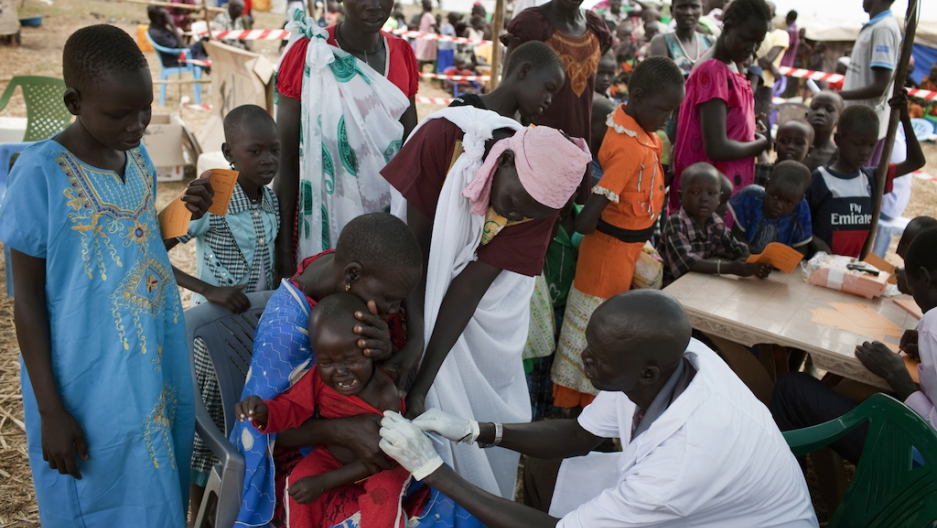 In the Yida refugee camp in South Sudan, humanitarian aid organization Médecins Sans Frontières (MSF) could not provide thousands of children with a life-saving vaccine last year, as it had hoped to do—not because of a lack of syringes or medical personnel—but, because the vaccine price was too high.

This year, South Sudanese children are continuing to go without vaccinations. That’s because for over a year, MSF has been at the negotiating table with British pharmaceutical company GlaxoSmithKline over lowering the price of the new pneumococcal conjugate vaccine (PCV), but the company hasn’t budged. The PCV vaccine can prevent infectious diseases like pneumonia, which is problematic in overcrowded refugee camps like Yida, where over 70,000 people live on a patch of land less than 5 square miles. Its lack of affordability is just one challenge faced by the organization in this volatile region, where a recent attack by the Sudanese government struck a village, hitting an MSF-run hospital and wounding six people.

South Sudan, the world’s newest nation, descended into crisis last December when a political dispute broke out between President Salva Kiir and his former deputy president, Riek Machar. The nation has been in violent civil turmoil since. Last weekend, the UN appealed for $1 billion in aid to the nation, warning that some 50,000 children could die this year from the conflict. There are over one million people displaced in South Sudan and an estimated 240,000 refugees living in the country, in camps like Yida. Many of these people impacted by the regional chaos depend on MSF for their medical care.

“From visiting the camps in South Sudan, the conditions are as bad as any I’ve seen,” said Mark Yarnell, senior advocate at Refugees International, a DC-based advocacy group. “If more people gain access to vaccinations it can help prevent further crises from happening in the future.”

Around the world, MSF vaccinates over 10 million people each year, and engaging in price negotiations with big pharmaceutical companies has become an increasingly necessary component of the organization's operations in crisis zones.

In the last decade, the cost of vaccinating a child has risen exponentially from $1.37 per child in 2001 to $38.90 in 2011. This is partly due to the fact that more vaccines are recommended by the World Health Organization. But the increased cost is also due to soaring vaccine prices, particularly for newer vaccines like PCV and rotavirus, which protect against two leading causes of death for children under five—pneumonia and diarrhea. The cost of these two vaccines, which were allowed to be procured by the United Nations beginning in 2009 and 2008, respectively, account for about 74 percent of the total cost to vaccinate a child, according to Kate Elder, vaccines policy advisor at MSF.

Moreover, these vaccines are produced by only three drug companies—Merck, Pfizer and GlaxoSmithKline—with no generics yet available to make their prices more competitive. In comparison, older vaccines like those for TB cost $.09 per child and for Hepatitis B cost about $.29 per child. Their prices have fallen over time with multiple suppliers.

More than 60 million women and children are in need of humanitarian assistance this year, with over half of maternal and child deaths occurring in crisis-affected areas, according to a recent report by Save the Children. The majority of these deaths are preventable.

While children can be vaccinated up to age five with PCV, MSF could only vaccinate those up to the age of 23 months in South Sudan’s Yida camp because of the high price. The full three-dose course of the new PCV vaccine costs MSF $21 per child.

Reducing vaccination prices for the poorest countries has been the goal of one private-public partnership, the GAVI Alliance. The organization, whose leading private sector backer is the Bill & Melinda Gates Foundation, negotiates price reductions with companies like Pfizer and GlaxoSmithKline for newer vaccines. A country is eligible to participate in GAVI if it has a gross national income per capita below or equal to $1,570. GAVI helps poor countries introduce new vaccines at a quicker pace.

But the partnership includes some gaps – like those experienced by MSF in South Sudan. Even though in South Sudan's gross national income is $790, humanitarian groups that source their vaccines independently are not eligible for GAVI prices in crisis situations. The country itself has not applied for GAVI support on the PCV vaccination. According to GAVI, reaching these low prices with vaccine manufacturers “is only possible when there are stable forecasts, long-term commitments to large volumes with secure financing agreements from donors and recipient governments working together,” and crisis situations are difficult to forecast.

The alliance says it pays around $3.40 per dose of PCV–-less than half of what MSF says it pays. A top-up fund called the Pneumococcal Advance Market Commitment, a pot of money created by five countries and the Bill & Melinda Gates Foundation, then provides the pharmaceutical company with additional funds to provide an incentive to the manufacturers.

MSF argues it should have access to the GAVI price and has asked the alliance to put more pressure on pharmaceutical companies to bring down prices. As it struggles to negotiate with GlaxoSmithKline in South Sudan, MSF has been in similar stalled discussions with other drug companies for much needed vaccines in other crisis spots.

Drug companies are often willing to donate in crises like these. GlaxoSmithKline offered to donate a pneumococcal vaccine to MSF in 2013.

“Humanitarian donations enable us to respond very quickly, within 48 hours when necessary,” said Mary Anne Rhyne, director of US External Communications for GlaxoSmithKline.

But MSF rarely accepts donations because it seeks to buy its own drugs and vaccines as a policy. It sees this as a more dependable and sustainable option for the organization’s ability to operate long-term in crisis situations.

“GAVI has done a superb job of shortening the time frame whereby the poorest countries have access to these new vaccines,” said MSF’s Elder. “At the same time, the success of GAVI has put into very clear vision the concerns of pricing and sustainability and how far pharmaceutical companies are willing to go in meeting their bottom line.”

The current practice of charging non-reduced prices for groups like MSF working in a crisis situation means “additional profits made on the backs of humanitarian emergencies,” Elder said.