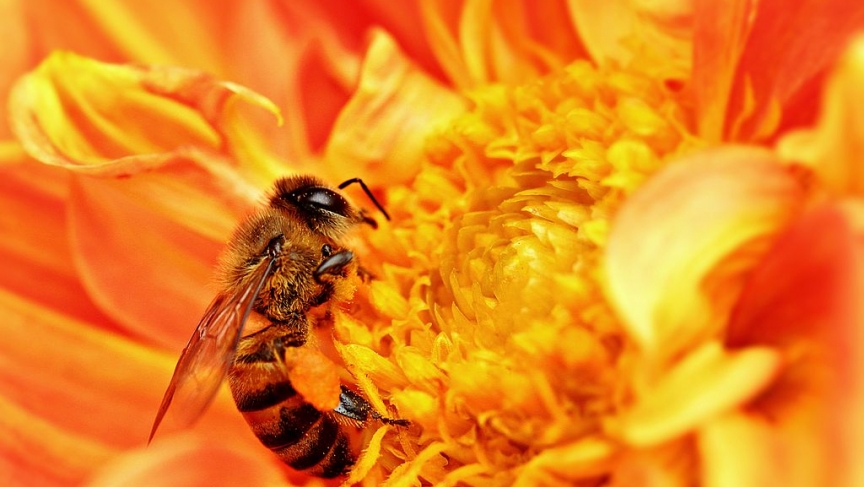 A honeybee takes nectar from a flower in Tanzania, while pollen attaches to its body.

US President Barack Obama on Friday created a presidential commission to study the collapse of honeybee colonies and other pollinators across the country. There's fear that the global disappearance of bees could have devastating effects on farmers growing crops that require pollination.

Obama expects a report with recommendations within six months. What he didn't do, however, is halt the use of a class of pesticides known as neonicotinoids, which have been linked to the collapse of honeybee colonies. That's exactly the action Europe took recently, suspending their use for two years while research is conducted.

Obama's study-first-and-act-later approach has frustrated many scientists and environmentalists. But the Guardian reports that Obama did also order that all new federal landscaping should use "plants that are beneficial to pollinators."

Does food taste better when it is artfully arranged?

That's what researchers sought to find out when they created three salads and asked consumers to rate them. The first salad was of your typical tossed variety. The second had the same ingredients, with each separated on the plate. And the third, well, it was arranged to look like a specific Kandinsky abstract painting. And the winner was ... Kandinsky.

The study reported in the journal Flavour notes that people rated it as tasting better and said they would pay more for it. Guess those researchers had never been to the nouveau restaurants where folks pay a lot of money for very little food served on enormous plates.

This Pakistani cartoonist will not be pushed around by extremists

Sabir Nazar has been drawing political cartoons for Pakistani media outlets for nearly 25 years. Recently, though, his work has become much more dangerous and limited.

Some of his journalist colleagues were killed by armed militants in January. So Nazar's paper has banned cartoons that could be seen as criticizing militant groups, religious parties, terrorist attacks or the national army. But Nazar refuses to be cowed.

PRI's The World talked to Nazar, who is currently on a fellowship in the US, about his decision to stand firm — and where that will leave him in the months and years ahead. Nazar also shared a number of his cartoons.

The search goes on for Malaysia Airlines flight 370

The search for the missing Malaysia Airlines plane, which started in early March, took a new turn this week. Searchers are moving hundreds of kilometers south of what was previously believed to be the most likely crash site in the Indian Ocean.

The area to be searched remains huge — 60,000 square kilometers. And the change is based on new work examining satellite data, as the South China Morning Post reports.

Julian Assange marks his two-year anniversary trapped in an embassy

For the past two years, Assange has lived inside the Ecuadorian embassy in London. The founder of WikiLeaks received political assylum from Ecuador after claiming persecution for the secret documents he has published on the WikiLeaks site.

Sweden has been trying to extradite him for alleged sexual offenses. British police are stationed outside the embassy to arrest Assange if he tries to leave.

Leo Hornak of PRI's The World was part of a BBC news team that interviewed Assange last year — and he reflects on what life in the embassy must be like for Assange.

The World Cup games slated for Saturday will take place in "the hottest conditions yet," according to AccuWeather. The heat and humidity will lead to heat indices approaching 95 degrees Fahrenheit, or 35 degrees Celsius.