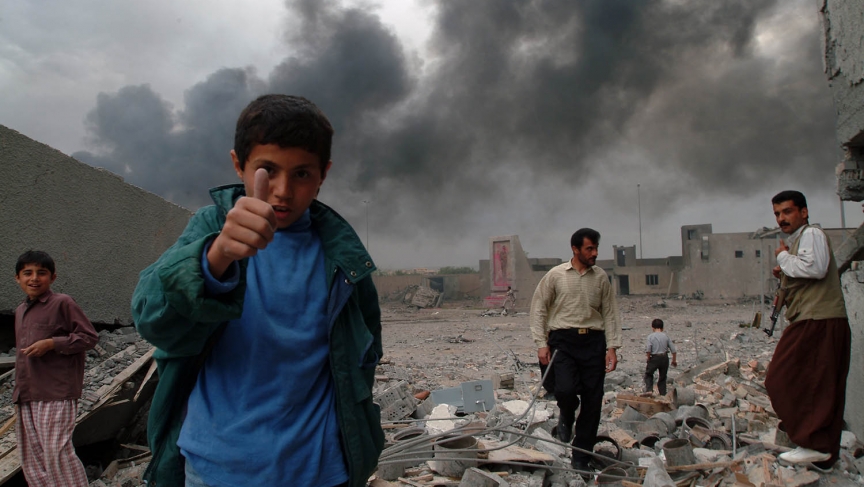 The Iraq War in 2004, captured by Canadian photojournalist Rita Leistner.

Canadian photojournalist Rita Leistner covered the opening days of the 2003 US-led invasion of Iraq as an independent journalist, and in recent days she has been studying new images of war there.

In April, 2003, Leistner entered Iraq through the northern Kurdish region, and worked her way south to Baghdad with the help of Kurds, Shia and Sunni Iraqis.

"Now I'm thinking a lot about the people that I met then," she says. "When I see pictures of [Shia] volunteers getting ready to fight, all in civilian clothes, half the time they're only wearing slip-on sandals as they head off to war."

"A typical news photo might be captioned 'Militants of ISIL executing dozens of Iraqi security forces at an unknown location,'" Leistner says. "You know, it reminds me of the worst kind of picture of mass murder that you could conjure up."

Leistner notes that images of captured Iraqi soldiers being packed into ISIS trucks are easy to associate with ominous photos from previous wars.

"It's unimaginable the kind of horror they must be feeling about the uncertainty and unknown, and indeed we know many of them are just being carted off to be executed."

Images from Rita Leistners travels in wartime Iraq in 2003-2004 have been published in the book, "Unembedded: Four Independent Photojournalists on the War in Iraq."  Her latest book is called "Looking for Marshall McLuhan in Afghanistan: iProbes and iPhone Photographs."