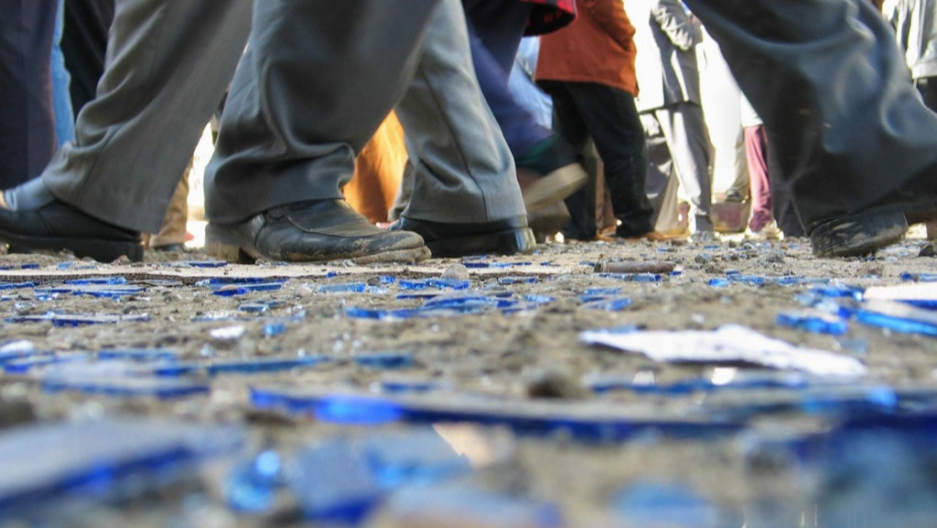 Iraqis walk on broken window glass after an explosion at the Kurdish Democratic Party headquarters in Baquba, 60kms northeast of Baghdad, in January 2005. Today, Iraq is as fractured as ever.
Credit: Ali Yussef
Share

The news out of Iraq just keeps getting worse. The jihadists from ISIL (the Islamic State of Iraq and the Levant, also known as ISIS) are closing in on Baghdad, hundreds of thousands of people have been displaced, and there is very real talk of the country simply breaking apart.

The news that US President Barack Obama is prepared to send 300 military advisers to Iraq to help out the beleaguered Iraqi army sends chills down the spines of many Americans, who remember all too clearly the catastrophic course of the last Iraq war.

But the United States may not be able to do much. The scars of the eight-year occupation are too fresh, and too deep.

“The US is not a credible actor [in Iraq],” said Barak Mendelsohn, associate professor at Haverford College, speaking to reporters in a conference call Friday. “They have lost a lot of good will. The solution will have to be regional.”

More from GlobalPost: No one asked these Iraqis what they thought about US troops coming back

The obstacles to any sort of compromise are daunting. The Shiite-dominated government of Nouri al-Maliki has alienated a Sunni minority with repressive policies that have all but excluded them from power. This has led to disaffected Sunni groups joining ISIL in northern and western Iraq.

While the Iraqi army is much larger and better-equipped than ISIL and its affiliates, it has had limited success in dislodging the insurgents from other areas it has seized. Fallujah and Ramadi have been under ISIL control since January.

Steven Simon, a senior fellow at The Middle East Institute in Washington, DC, agrees that it may be too much to hope that ISIL can be defeated.

“ISIS is deeply rooted in western Iraq,” he said. “They also have safe havens on the other side of the rather blurred border [with Syria].”

The Kurds in the north, who have seized territory and become all but independent over the past two weeks, will not give up their gains, Mendelsohn insisted, and putting the country back together may be nearly impossible.

“We are looking at de facto partition,” said Mendelsohn.

This has been coming for quite some time.

Way back in 1991, after the Gulf War, when President George H. W. Bush decided not to go after Saddam Hussein, the possible implosion of the country was one of the factors that deterred his team. His secretary of defense, Dick Cheney, was adamant that “it would have been a mistake for us to get bogged down in the quagmire inside Iraq.”

“[O]nce we'd … gotten rid of Saddam Hussein and his government, then we'd have had to put another government in its place. What kind of government? Should it be a Sunni government or [Shiite] government or a Kurdish government or Ba'athist regime? Or maybe we want to bring in some of the Islamic fundamentalists? How long would we have had to stay in Baghdad to keep that government in place? What would happen to the government once U.S. forces withdrew? How many casualties should the United States accept in that effort to try to create clarity and stability in a situation that is inherently unstable?”

But what Cheney knew in 1991 he seemed to have forgotten a decade later, when he became a leading advocate of the war in Iraq.

The 2003 invasion unleashed sectarian violence on a massive scale; many feared the country would never again be able to work as a unified entity.

Iraqi men who volunteered to fight alongside the security forces against Sunni Muslim militants and jihadists have physical exams at a recruitment center in Baghdad on June 20, 2014.

In 2007 Joe Biden, then a senator from Delaware, co-sponsored a measure calling for a federated Iraq, according autonomy to the various groups. As he wrote in an op-ed he coauthored with Leslie Gelb, president emeritus of the Council on Foreign Relations, “Some will say moving toward strong regionalism would ignite sectarian cleansing. But that's exactly what is going on already, in ever-bigger waves. Others will argue that it would lead to partition. But a breakup is already under way.”

Biden’s resolution was widely pooh-poohed, and then-president Bush continued with the surge. For a while, things stabilized, at least on the surface. But the currents were always running underneath.

Peter Galbraith, former US diplomat who acted as an advisor to the Kurdish government in 2003, also argued against keeping Iraq together by force.

In his own op-ed in The New York Times called “Make Walls, not War,” published in October 2007, he points to the value of some form of federalism.

Sunnis would never accept a Shiite-dominated state, he maintained, and the Kurds would insist on independence. All the money and time the US spent on training the Iraqi army would be wasted if the government in Baghdad continued to repress its Sunni minority.

“American training can make Iraq’s Shiite-dominated security forces more effective, but it cannot make them into neutral guarantors of safety that the Sunnis can trust,” he wrote.

His words seem prescient indeed given the widespread defection of Iraqi security forces in Mosul and elsewhere in the face of the ISIL advance.

“Let’s face it,” wrote Galbraith, “partition is a better outcome than a Sunni-Shiite civil war. There is, in any event, little alternative to partition. Iraq cannot be reconstructed as a unitary state, and the sooner we face up to this reality, the better.”

If the experts are right, then what is happening now seems to be the worst of both worlds: a Sunni-Shiite civil war and a de facto partition of the country.

“Some things cannot be undone,” said Mendelsohn. “The bad blood between Sunni and [Shiite] is becoming worse with every crisis. Maybe a few years ago there could have been a strong central government, but now the regions will demand much greater autonomy.”

No matter what the US and other international actors try, there is no going back, he said.  “We are not going to have the same Iraq even in the best of circumstances.”

Drivers wait in line for gas in Erbil, Iraq on Thursday.