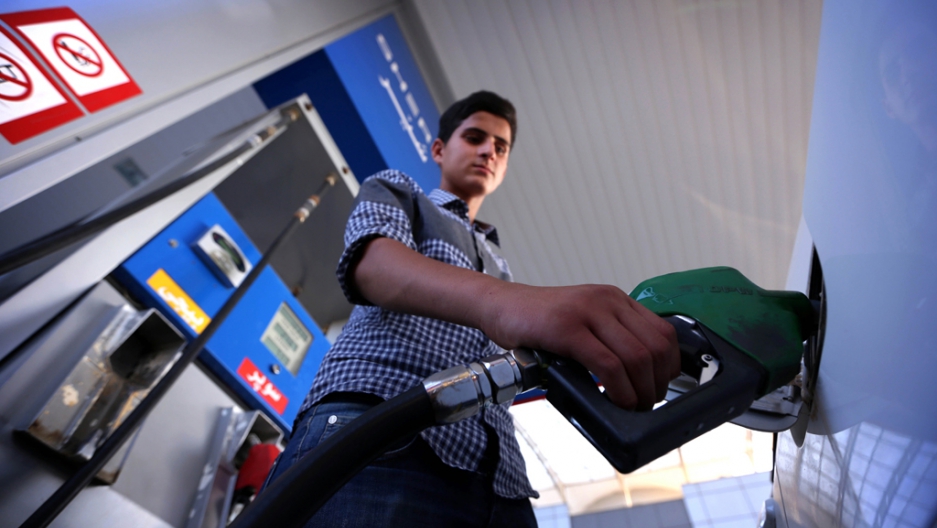 ERBIL, Iraq — There's a reason so many refugees from Iraq's north have come to Erbil: it's safe.

Located in the country's semi-autonomous Kurdish region, Erbil is relatively isolated from the fighting between Al Qaeda-inspired militants and Iraqi forces a few miles away. The Peshmerga, or Kurdish security forces, run a tight ship, and construction hasn't missed a beat in this resource-rich boomtown.

You can read anxiety in the long lines at the gas station. Cars snake down highways, sometimes for more than a mile, waiting to fill up with rationed fuel. Individuals are only allowed 30 liters, under eight gallons, less than what it takes to fill most car tanks.

The run on gas in Erbil reflects a general uneasiness as people prepare for the worst and Iraq teeters on the edge of a full-blown civil war.

"It's because of Daash," said Ahmed Nader, a 22-year-old construction worker using the Arabic acronym for the Islamic State of Iraq and the Levant (ISIL), also known as ISIS, which has been leading the charge across Iraq's north and is now encroaching on Baghdad.

Dabbing at his sweaty brow, Nader says he's not overly worried, but wants to be prepared nonetheless. That's why he's been waiting in line at the gas station for nearly two hours. Others have been here for more than three.

Nader's other option is to buy gas on the black market. But prices there have skyrocketed — to more than five times what they are at the pump.

"The big reason why there are long lines isn't because of supply, its because of demand. People are buying more than they should be," said Ben Lando, editor in chief of the Iraq Oil Report, a country-specific oil industry news site. "People are scared, they're buying more and stockpiling it."

Over the past week some multinational oil companies with offices in the Kurdish region have evacuated a small number of nonessential staff. And companies that haven't touched staffing have taken other steps.

"Since the crisis, now everyone has at least a plan," said a contractor who regularly does business with oil companies and security firms. Asking not to be identified for fear that it would jeopardize his business relationships, the contractor described the situation as a wake-up call for companies doing business in northern Iraq. He said firms with previously lax or nonexistent security guidelines have purchased medical kits, finalized evacuation plans and established safe houses.

So far Erbil remains "a relatively safe place," Lando said, and the Kurdish Regional Government has a vested interest in keeping it that way — namely tens of billions of dollars in foreign investment. "One of the top priorities of the government will be to make sure that [big multinational] companies stay safe," he said.

"The expats, yeah, they're not used to these situations. They haven't experienced war before," said Shahalo Nanakal, an engineer at a drilling and explorations firm in Erbil. "But for locals, we've been there before. We're familiar with this situation."

Originally from Erbil, Nanakal says he isn't worried. He trusts the Peshmerga. But his firm and all the multinational companies he works with have updated their emergency response plans, "you know, just in case."

Downtown, at one of the city's newly built five-star hotels, the restaurant is more crowded than usual. Wealthy displaced Iraqis and foreign journalists add to the usual crowd of contractors in khakis and businessmen in suits.

But hotel occupancy is actually lower than usual, said one of the receptionists.

"Because of the situation," he explained. Though, personally, he isn't concerned. "We have faith in our government and security forces," said the receptionist, who declined to give his name. "But maybe the foreigners do not."