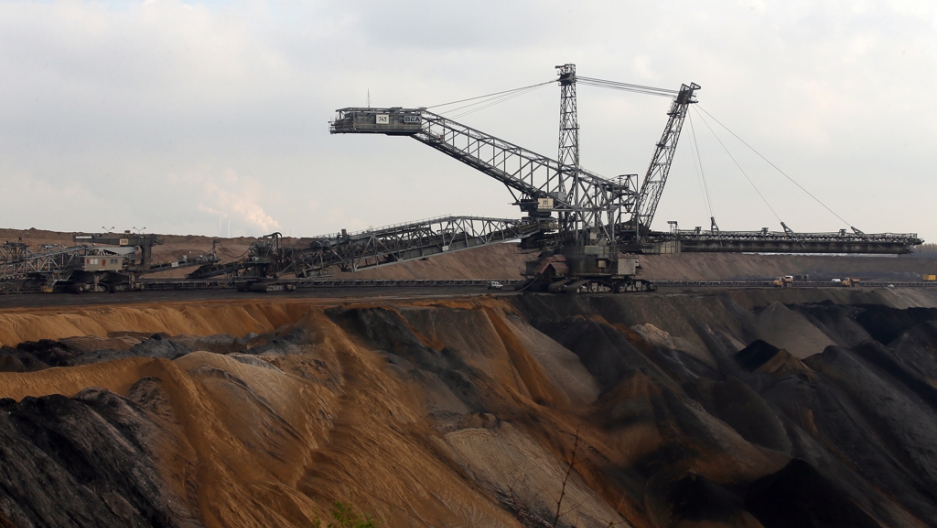 Bucket excavators dig lignite coal out of the ground at the Garzweiler open-pit coal mine at Jackerath view point on November 19, 2013 near Bergheim, Germany.
Credit: Christof Koepsel
Share

Do you want the good news first or the bad news?

Okay, good news is that Germany set new records this month for solar energy production and usage. And that is legitimately awesome. First, between 1 p.m. and 2 p.m. on June 6, solar panels generated a record 24.24 gigawatts of energy. Then, on June 9, solar power accounted for more than 50 percent of the country's energy demand.

It was the first time that more than half of Germany's energy (at any given moment) came from the sun.

Overall solar demand is rising, too. Compared to the first five months of 2013, solar energy has grown by 34 percent so far in 2014. Most of the growth is coming from the German people. 90 percent of all solar panels are on the roofs of people's homes, not on massive solar farms.

So these solar records are good signs.

Solar and wind capacities are growing, but so are Germany's fossil fuel emissions. Emissions increased 5.5 percent from 2000 through the end of 2013. Over the same period of time, consumption of coal increased 13 percent.

Coal is the dirtiest of fuels and there are at least three reasons for its resurgence in Germany.

First, Germany has been moving rapidly away from nuclear power ever since the reactor meltdown in Fukishima, Japan in 2010. Coal has filled that void.

Second, and more recently, coal has promised Germans energy independence and security at a time when one of their largest energy suppliers, Russia, isn't exactly an ideal partner, politically or economically. So domestic coal is a much better bet, for a host of reasons, than Russian natural gas.

Third, the transition to renewable energy comes with technological challenges. Solar and wind can provide plenty of power — apparently more than half the power Germans require at any given time — but they're difficult to store. On a sunny and windy day, it might seem like the green revolution has already arrived. But on other days, when it's cloudy and windless, coal picks up the slack and a renewable future seems as far away as ever.

The growing reliance on coal has been called a "bridge" between Germany's aspirational and developing renewable energy system of today and a much cleaner, fully realized renewable future. But that bridge seems to be growing and its end disappearing from view.