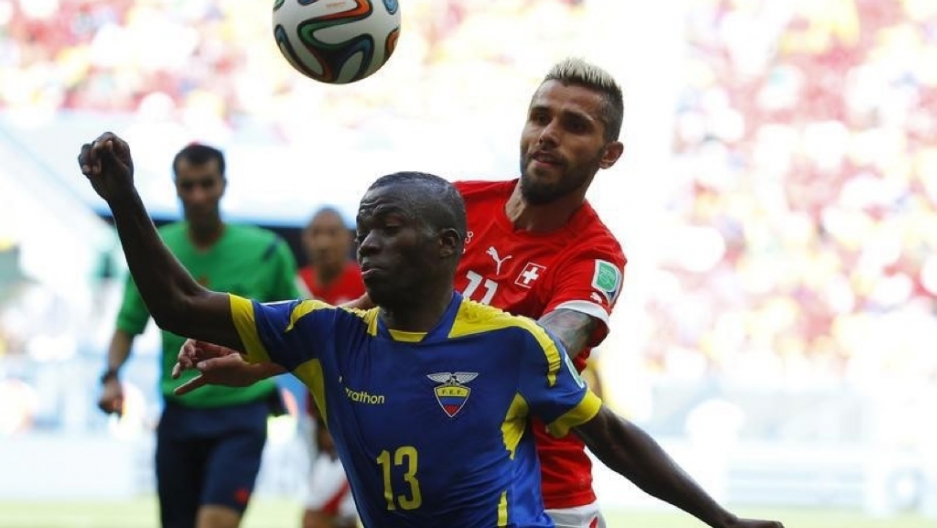 ESMERALDAS, Ecuador — For people in this sparsely populated province along Ecuador’s Pacific coast, that famous international soccer tournament underway in Brazil boils down to this: Esmeraldas vs. the World.

That’s because Ecuador’s World Cup team is a demographic oddity. Ten of its 23 players come from Esmeraldas province, while several more trained or were raised here. Yet Esmeraldas is home to just 530,000 people — a mere 3 percent of Ecuador’s population. That would be like North Carolina supplying half of the US national men’s squad.

And there’s something else: Almost all of Ecuador’s World Cup players are Afro-Ecuadorean, a tiny ethnic minority of just 7 percent of the population.

“The province is full of good players,” says Ezequiel Mosquera, a retired army soldier, as he watched a pick-up soccer game in the town of Esmeraldas. “They are made of a very strong wood.”

The wealth of soccer talent here is all the more extraordinary given the rustic conditions. Esmeraldas is home to a shipping port, an oil refinery and a large fishing industry. But three-quarters of the population lives in poverty and the sports infrastructure is dismal.

The province hosts 37 pro and amateur soccer teams but there are only about five regulation soccer fields where they can practice and play. As a result, players often gather on the broad sandy shores of the Pacific, where they set up soccer pitches up and down the beach.

Beach soccer may be one of the secrets to Esmeraldas’ success.

The games amount to survival of the fittest. In one match, a player is fouled and goes down hard. That prompts teammates, coaches and even spectators to storm onto the field to demand a penalty kick. One irate player takes a swing at the referee, who ducks the punch.

Then there’s the playing surface. Not only is it tough to dribble and shoot in the sand, but when the tide rolls in, soccer pitches turn into mud slicks.

“You sink into the sand so you need a lot of power in your legs,” says Omar Estupiñan, president of the Esmeraldas Soccer Association. “It makes players stronger.”

Indeed, after learning the game on the beach, players often excel once they move to grass fields. But even these are in bad shape. At the main soccer stadium in Esmeraldas, the pitch is full of weeds. In the locker room, there’s often no water. Players forego showers and change into street clothes on the sidelines. Some wash their soccer cleats in mud puddles.

Still, there’s a strong economic incentive to pursue the sport. Jobs here are scarce and many impoverished young men see “futbol” as one of the few ways to help their families and move up in the world.

Jumping off the pier of the port of San Lorenzo, Esmeraldas province, in northwestern Ecuador. (Eitan Abramovich/AFP/Getty Images)

One promising teenager is Alexander Rangel, who lives in an Esmeraldas slum with his mother and stepfather. He’s only 15 but well over 6 feet tall.

On a recent rainy morning at the stadium, Rangel practiced with other goalkeepers in a training session sponsored by the soccer association. He leaped into the air to stop shots, then landed hard on his side, before scrambling to his feet to block more shots.

Breathing hard during a break in practice, Rangel said he dreams of playing in Ecuador’s premier league, then signing with a professional club in Europe.

“That is why I am here: To work hard and to be able to move my family forward,” he says.

Rangel and other players and coaches talk up the race factor. They claim that black players are simply more talented. And Esmeraldas, which is populated by descendants of African slaves, is one of the few predominantly black provinces in Ecuador.

Cagua points out that his and other soccer teams in Esmeraldas are relatively poor and play in Ecuador’s bush leagues. Not surprisingly, the region’s most gifted players don’t stick around very long as richer clubs from the country’s premier soccer league swoop in to sign the top talent. Others find fame and fortune abroad.

Among them is Antonio Valencia. He earns millions playing for Manchester United in England and is captain of Ecuador’s World Cup squad.

“He is a source of pride for everyone in Esmeraldas,” says Luis Valencia, Antonio’s uncle, who runs a pharmacy here. “If he plays well, people say, ‘Your nephew was good!’ If not, they say: ‘Hey, your nephew played badly.’”

However, the South American country’s lone goal came from another Valencia — midfielder Enner Valencia, who’s unrelated to Antonio — who was born and raised in Esmeraldas, too.

Here is the goal: