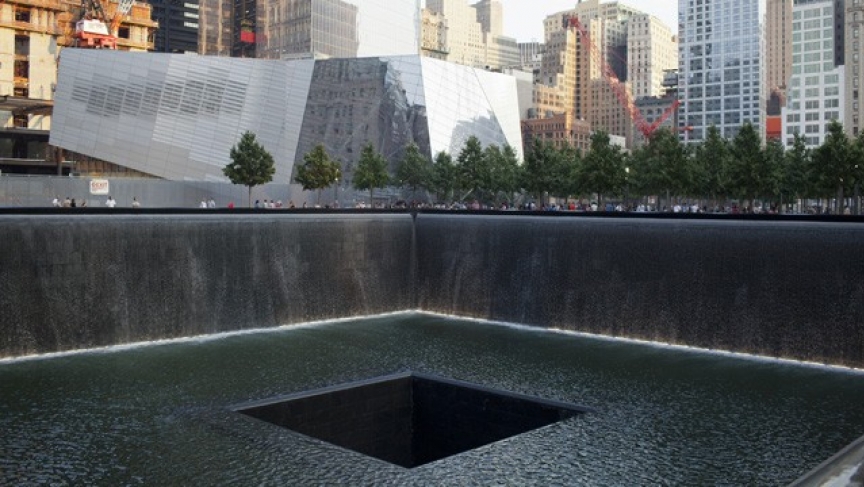 These memorial pools now denote where the World Trade Center towers stood before the 9/11 attacks.

No American building project has been more closely watched than the 9/11 Memorial in New York City.

Three years ago, the first pieces of the grand plan were laid: Two vast, deep, black pools where the Twin Towers once stood. Now the fences around the eight-acre Memorial Plaza have come down and the 9/11 Museum has opened.

Michael Kimmelman, the chief architecture critic for the New York Times, has been visiting the site daily to watch how New Yorkers and out-of-town visitors interact with it. He has held his peace about the site — until now.

The place doesn’t feel like New York. It feels like a swath of the National Mall plunked in downtown Manhattan: formal, gigantic, impersonal, flat, built to awe, something for tourists.

Kimmelman acknowledges the complexity surrounding the project, which had to deal with many competing and legitimate interests. “Balancing these interests, between the victim's families, the real estate interests and the neighborhood, is very complicated,” he says. “I think, perhaps inevitably, but unfortunately, that balance has not really been well struck. I don't think this is really a place that feels like it's part of New York and that represents the things we value in New York.”

Kimmelman notes that the site is almost “entirely peopled by tourists.” He says it is not designed in a way that makes it inviting to the New Yorkers who will be using the site every day. What’s more, he says, “the list of ‘don’t’s’ on the site is astonishing.”

“You can’t sing, much less raise a protest or demonstration,” he says. “I think that does raise some very profound questions about a site that is supposed to speak to our liberties.”

Kimmelman says he wants to be careful not to sound like “some crazy critic who comes in and says that every place should be like Central Park or Times Square.” He understands, he says, that the site is unique, and uniquely troubling. It is not just a memorial to those who died — it’s the place where they died.

What makes the Vietnam Memorial so successful, he believes, is “an extraordinary marriage of two seeming opposites.” The first is what he calls "monumental minimalism" — the kind of abstraction that allows people to say and to think what they want about the Vietnam War; the second is the literalness provided by the list of names, which adds a deeply personal element to the site. The meeting of these two languages creates a powerful experience.

The intimate scale of the Vietnam Veterans Memorial also helps make it so moving. In New York, on the other hand, “there was a desire to do something really huge,” Kimmelman says. This was not the best approach in his view.

Instead, he keeps coming back to the idea that demonstrating the ability of New York, indeed all of America, to return "to life, and to return this place to life, would have been [in itself] a very remarkable and powerful statement about our resilience, and about democracy.”

It may be, Kimmelman says, that the completion of the new train station — startlingly designed by architect Santiago Calatrava — will restore some of New York's legendary vitality to the site.

“I do think it's going to create a very striking object,” he says. “It looks like a giant dinosaur skeleton parked there at the corner of the site. It’s in some ways the most remarkable piece of architecture on what has become a place that, in fact, doesn't have such great architecture. That banality is an unfortunate thing.”