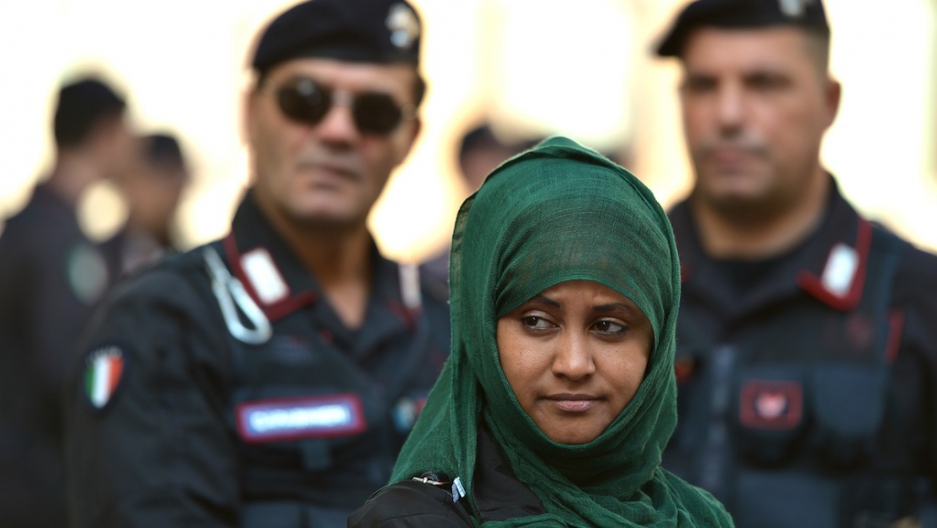 A woman demonstrates in front of the Italian Chamber of Deputies, the Montecitorio Palace, to protest against human rights violations and call for democracy in Eritrea in October 2013.
Credit: Gabriel Bouys
Share

ROME — On a recent morning, a group of roughly 40 men and women from Eritrea gather in Rome’s central Piazza della Repubblica to ask the government for help. After struggling for over a year to find a job, shelter and assistance navigating an immigration system that has broken under the weight of record boat migrant landings and bureaucratic mismanagement, it has come to this.

By now exasperated, some of these refugees survived a shipwreck last October that killed roughly 400 Africans off the coast of Sicily. All of them risked their lives crossing first the desert to Libya, then the Mediterranean to Italy. But given that hardships persist even in the euro zone’s third-largest economy, some are wondering if they made a mistake coming to Italy as it struggles to recover from its worst postwar recession, leaving dwindling welfare resources for its native population let alone a swelling class of migrants.

Standing in a row, they unfurl a banner made with a bed sheet. “Sorry if we failed to die at sea,” it reads, emanating the fresh smell of paint.

“We worked on these all morning,” says Werede, a 28-year-old who deserted the Eritrean military to come to Italy. Eritrea has been described by Reporters Without Borders as "a vast open prison for its people" with one of the world's worst human rights records. The country's government is running an indefinite conscription program, a UN investigation found, and Eritreans caught evading it face "on-the-spot execution."

Werede, who declined to give his last name for fear of retaliation against his family, points to three other bed sheets with similar slogans: “We need to be recognized. We exist even after we’re rescued, even if Italy pretends we don’t.”

But as cars drive by, traffic hardly slows, and a police officer soon warns that without a permit they’ll have to leave before any news crews arrive, had any been planning to. Permits don’t mean much in a country burdened by the arrival so far this year of approximately 50,000 migrants, more than the total for the whole of 2013. Meanwhile hundreds more like these protesters continue to arrive by the crowded, rickety boatful virtually every day, “failing” to die at sea.

On Tuesday, Italian authorities rescued almost 600 migrants in the Strait of Sicily between Italy and Africa as part of the search-and-rescue operation known as Mare Nostrum, our ‘Our Sea,’ the term the ancient Romans used to refer to the Mediterranean.

Some 293 people reached the city of Catania aboard a coast guard cruiser, while the navy ship Sirio shuttled 280 more to the small town of Pozzallo. Both ports are just a few forced to pick up the slack since the now infamous reception center on Lampedusa — the tiny Sicilian island closer to Africa than Europe and made famous by Pope Francis' visit last year — was temporarily shut down following damning footage last winter of male and female migrants forced to strip nude out in the open before getting hosed down with disinfectant.

Police are now working to identify human traffickers on board Tuesday’s boats, traffickers who in most cases are migrants themselves, given a free ride in exchange for manning the ship. Being from a coastal country, from Egypt or Tunisia perhaps, sometimes they know their way around a boat, or how to use a GPS system. Oftentimes they don’t.

Don Mussie Zerai is an Eritrean priest who over the past decade has become a point of reference for African migrants heading to Italy. His phone number is scrolled on the wall of camps in Libya where migrants stay before embarking for Sicily, he says. Some refer to him fondly as St. Christopher, the patron saint of travelers.

“I get calls from people in the middle of the sea when their engine breaks down,” he told me over lunch recently in Rome. “Sometimes the captain clearly doesn’t know what he’s doing. I’ve had the coast guard on one phone, explaining how to send a distress signal, while I have hundreds of migrants on another phone, and I have to translate between the two. Then all I can do is sit and wait, hoping that rescuers find them.”

After Tuesday’s rescue, the interior ministry said it was working overtime to empty out reception centers in southern Italy to make room for the new arrivals, a practice it says cannot go on much longer if the European Union fails to assist Italy, Spain and Greece on the front lines of immigration from the global south.

With reception centers bursting at the seams quicker than new ones can be built, many asylum seekers are forced to live in abandoned buildings turned into squat houses.

Those in Piazza della Repubblica say they have been living for months in a ministry building, left vacant amid euro crisis-caused austerity cuts to the public sector.

A few days after the protest, I sat in on an Italian language class organized by volunteers. When one of the teachers didn’t show up, a group of advanced students insisted I teach them. They took me to a cavernous conference hall, where long oak tables that once propped up the elbows of public officials had been turned over, some with their legs removed.

In my own non-native Italian, I led the class, asking them to tell me their stories. One had a grandfather who fought with the Italians in World War II, when Eritrea was still a colony under Benito Mussolini.

“The church soup kitchens. And we drink from public fountains. At least Rome has public fountains. Sicily didn’t,” said Ermi Numu, 35, in a half-joke that got a hearty laugh from his compatriots. “I guess that’s why we came here”.

Our lesson went on for two hours, as the students talked of high expectations that seemed to have died at sea; stories of college graduates who had hoped of building on their profession, but would now leap at the opportunity to wash dishes.

“Are you sorry you came?” I asked. They paused.

“We’re sorry we wound up here,” replied Micheal Zerie, 26, who according to EU law must stay in Italy after registering in Rome as an asylum seeker, and can’t seek better benefits and employment opportunities where he’d like to in northern Europe.

“But we’re not sorry we left.”

Christopher Livesay is an award-winning multimedia journalist based in Rome, Italy. His reporting for this piece is part of the GroundTruth reporting fellowship on youth unemployment, "Generation TBD."