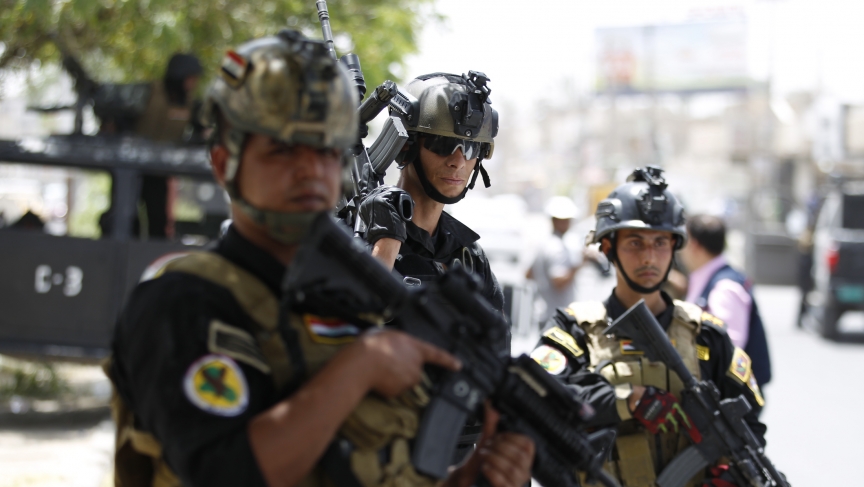 The headlines from Iraq this week looked as if they were plucked from a decade ago.

Security forces setup check points on the streets of major cities. Firefights raged across the country. Islamic insurgents fought to seize control of the country's largest oil refinery. And Washington, once again, weighed options for using its military might against an enemy deemed to threaten not just Iraq, but the wider region.

Iraq has formally asked the United States to conduct air strikes against radical extremists from the group known as the Islamic State in Iraq and Syria — or ISIS, for short. The chairman of the US Joint Chiefs of Staff, Martin Dempsey spoke to lawmakers on Wednesday and said it is in America's "national interest to counter [ISIS] wherever we find them."

But sending in large numbers of US ground troops is off the table. And the Obama administration signaled its reluctance to use American air power in Iraq, a move that would upend the president's claim to have brought an end to the war. Defense Secretary Chuck Hagel said the US "can't dictate outcomes'' and it is "up to the Iraqi people'' to determine the course of their country.

In Baghdad, Iraqi special operations forces were deployed to help prevent ISIS militants from advancing into the capital itself. But people were still afraid, one resident told the BBC.

“There are less people on the streets. The food and gas prices are increasing. People are afraid because ISIS knows only how to kill. In Baghdad, there are more and more young men with arms and this is concerning as well as they are often irrational young people, and we never know their reactions," said Jaffar Emad.

“There is still a lot of fighting spirit in some of these [pro-government] guys,” says Richard Spencer, Middle East correspondent with the Daily Telegraph, from Erbil in northern Iraq. Most of the Iraqi military and police units based in Sunni areas of northern and western Iraq melted away in the face of the onslaught by ISIS fighters in recent days. But, Spencer says, “it seems that there are some units that have not caved in.”

With its attack on Baiji, Spencer says ISIS might be following a plan similar to the one it has followed in Syria. “When ISIS took control of much of northern Syria, and there was this fight-back by other rebel groups, the places that they coalesced around and are still defending are the areas of northeastern Syria where there are oil fields.”

“They're a very canny organization,” Spencer says. ISIS has refined and sold oil in Syria and even — according to western intelligence officials — sold it to the Syrian regime. “This is how ISIS is so successful. ... They have this ideological fervor that we know about, but they are also very pragmatic.”

ISIS has controlled parts of Syria for at least a year. And Spencer, who has reported from parts of the country where the group has imposed its harsh version of religious law, says people living under the group's rule have been subjected to some vicious practices. That includes people having their hands cut off, being executed in public, and even being crucified for various alleged infractions.

“In Iraq, it's somewhat different at the moment,” Spencer says. “[ISIS] has formed an alliance with Sunni tribal leaders, former members of Saddam Hussein's army and Baathist Party, and a lot people coming from those areas who we're speaking to say they're very happy with this Sunni uprising. They wanted to get rid of this Shia government of Iraq.”

The question is, how long will this alliance last?

At one time, not so long ago, the government in Baghdad had a deal with Sunni tribal leaders in Iraq. The government gave them cash payments to fight Islamic radicals from al-Qaeda in Iraq, the group that ISIS eventually emerged from. But that arrangement fell apart after Prime Minister Nouri al-Maliki stopped making those cash payments.

“That was a sign to many of these Sunni tribal leaders that Maliki was never going to be on their side,” Spencer says. “If he can somehow resurrect that alliance, ... you could reunite Iraq. But [Maliki] has shown no sign of being willing to do that.”