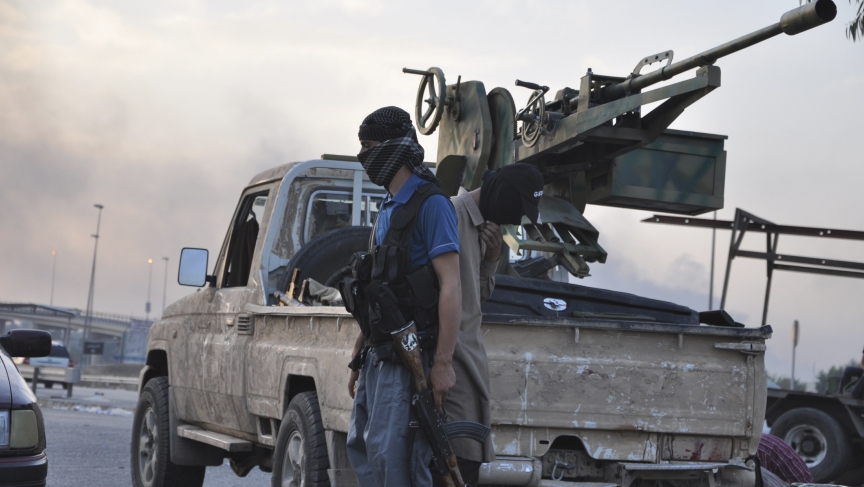 ISIS fighters stand guard at a checkpoint in the northern Iraq city of Mosul, June 11, 2014.

EDITOR'S NOTE: The sources of ISIS weaponry have received intense scrutiny since the Nov. 13 attacks in Paris. Here's a report of the roots of that support, from 2014.

Many of the weapons used by the Islamic militants known as ISIS were simply captured from its enemies in Syria and Iraq. But ISIS also has foreign backers — some of whom are "friends" of the US.

“There’s a number of sources,” says David Axe, a freelance war reporter who knows a lot about weaponry. “ISIS, like all Syrian opposition groups,” he says, “enjoys a strong level of support from Turkey, from Qatar, from Saudi Arabia."

The reason, says Axe, has to do with common interests. "What ISIS wants, to some extent, overlaps with what certain powerful people in some of these Gulf states want, which is, for lack of a better word, a 'Sunni-stan' — a homogenous Sunni Muslim state in what is now Syria and Iraq.” Turkey, he adds, wants to see Syria's president out of power.

Officially, Turkey, Qatar and Saudi Arabia deny that their citizens support ISIS in any way. Qatar and Saudi Arabia even point to laws they have passed that make it difficult for individuals to send aid to militants. However, research by the Brookings Institution shows their enforcement of such laws and policies has been mixed.

Money from the Gulf is used to acquire weapons on the black market, says Axe. He says New York Times reporting last year examined air traffic data and found that planes fly with weapons from the Gulf to Turkey, or sometimes head to third countries like Croatia to pick up weapons first and then to Turkey.

And it's not the big weaponry that ISIS wants, he says. “ISIS is a classic militia group, in the sense that it has favored light, easy-to-support, mobile and easy-to-hide weaponry over the heavier stuff you might find in a government force.”

According to Axe, ISIS destroyed much of the heavy equipment that it captured last week in Iraq — weapons like M1 tanks, M113 armored personnel carriers, MRAP heavy armored trucks, and other multi-million dollar pieces of equipment. He suspects they’re well aware they can’t operate and support these systems.

Still, Axe thinks they may have seized shoulder-launched, surface-to-air missiles. In US military jargon, these are MANPADS — man-portable air defense systems. “This is a big concern in some world capitals, especially intervention-minded world capitals,” he says.

“There are ways to defeat this kind of weaponry,” he adds. “But if a country like the United States is considering air strikes, the presence of these MANPADS changes America’s calculation. It’s a lot more dangerous. You don’t want to lose pilots. The prospect of pilots being captured by ISIS is politically terrifying for American leadership.”

MANPADS could also be used to bring down an airliner on landing or take-off. “If you’re asking if there’s a possibility these weapons could end up with international terrorists, [the answer is] yes.”