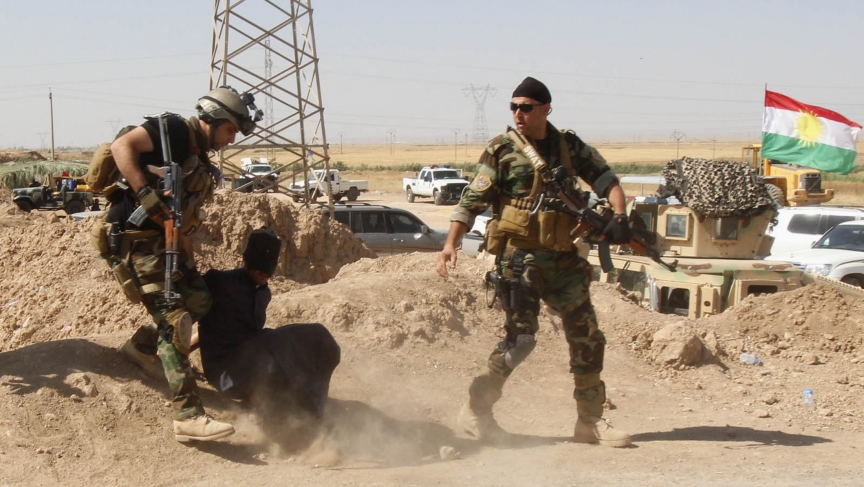 Kurdish security forces in Iraq detain a man suspected of being a militant belonging to the al-Qaeda-linked Islamic State in Iraq and Syria (ISIS), June 16, 2014. Iraq's Shiite rulers defied Western calls to reach out to Sunnis to defuse the ISIS uprising in the north of the country.

The United States and Iran would be an unlikely alliance, but with a growing threat from the Sunni militant group, the Islamic State of Iraq and Syria (ISIS), the two historic adversaries have begun to talk about working together.

"It's not going to be the US and Iran walking off into the sunset together, let's put it that way," said Barbara Slavin, a senior fellow at the Atlantic Council, who monitors the US-Iran relationship.  "But there are things we can do."

Sunni militants from ISIS (also referred to as the Islamic State in Iraq and the Levant, or ISIL), have gained control over more territory in Iraq in recent days, and continue to kill Shiites as they go.  After a two-day battle with security forces, ISIS took control of the northern city of Tal Afar, apparently part of their push toward Baghdad.

Washington and the Shia-led government in Tehran, who have been bitter foes for over 30 years, have a shared interest in supporting the government of Iraqi Prime Minister Nouri al-Maliki. Monday, the US deputy secretary of state and the Iranian foreign minister discussed the ISIS crisis on the sidelines of nuclear talks in Vienna.

Cooperation between the two nations could mean a number of different things on the ground. Slavin said for one, the US and Iran could share intelligence via the Iraqi government, similar to when they worked together to push the Taliban out of Afghanistan in 2001.

Iran and the US could also cooperate on removing al-Maliki and replacing him with someone less polarizing, Slavin said. "He has governed in an extremely dictatorial way," she said. "He's alienated a lot of people, and surely in this community, which has many very sophisticated individuals, the United States could find someone it prefers. And I think even Iran could too."

The Iraqi elections in April saw al-Maliki's State of Law party win a plurality, but not a majority, of parliamentary seats, which means a leadership change is a possibility.

However, the State Department has confirmed that the US will not coordinate any sort military action with Iran. "The best we can hope for is a kind of very careful détente," said Slavin.

Some countries have voiced their displeasure at the possibility of US-Iran cooperation in Iraq. Israel, a close ally of the US, is primarily concerned with reaching a nuclear deal with Iran.

"We would especially not want for a situation to be created where, because both the United States an Iran support the government of al-Maliki, it softens the American positions on the issue which is most critical for the peace of the world, which is the Iranian nuclear issue," said Israeli International Relations Minister Yuval Steinitz, in an interview with Reuters on Monday.

Slavin says that a joint effort between the US and Iran does not mean that the two countries have to agree on everything. She likened the potential relationship with Iran to the one the US had with the former Soviet Union. While the two rivals generally disagreed on political and economic issues, they still maintained embassies, and occasionally cooperated on shared concerns, including putting limits on certain strategic offensive weapons in the 1970s.

"Even though the Saudis and Israelis may not like it, the more options we as the United State have, the better," Slavin said.