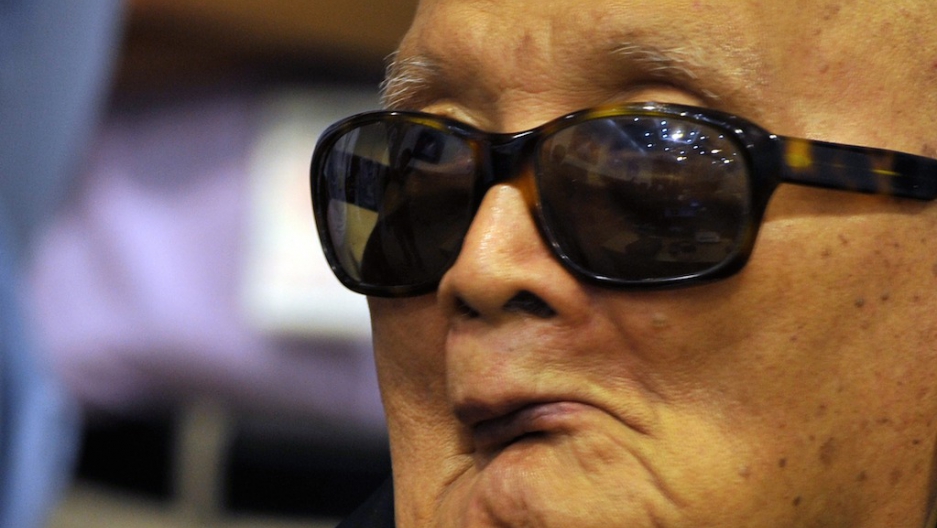 That’s how Chun Rany describes the giants that have come to hurt her for the past two years.   They usually arrive as a family of three. They’re the most horrifying thing she’s ever seen.

“They tried to scoop my eyes out, and they wanted to rape and kill me,” she frantically recalls from her hospital bed in Cambodia's only mental ward.

For age 26, she looks pale and weathered.

As the young woman talks about her hallucinations, her mother cries. She had given birth to a beautiful daughter, spent most of her income on education, and hoped for her to marry a decent man.

Then the hallucinations started.   “My family didn't know how to help me,” Rany says.   Then they learned of the Khmer Soviet Friendship Hospital, the only state facility providing in-patient treatment to the mentally ill.

Rany's case is extreme, but not rare in a country with one of the largest mental health burdens worldwide, said Chok Thida, head of the mental health department at the hospital.

“It is a big problem here. Look at people's daily lives. They struggle and it's stressful, and that leads to all sorts of mental problems that people can't cope with,” Thida says, adding that the majority of patients are poverty-stricken and struggle to scrape together the $5 for initial consultation.

Rany was very lucky to get a bed. The facility has only ten of them. There’s also a serious shortage of mental health professionals. In the past two decades, only 48 psychiatrists here have been certified.

In 2012, in a first attempt to define the scope of Cambodia’s mental health crisis, the Royal University of Phnom Penh interviewed 2,600 people. More than 27 percent showed acute anxiety, and 16.7 percent suffered from depression.

The study estimated the suicide rate at 42.35 per 100,000 people. That would put Cambodia second only to Greenland in incidence of suicides.

Anxiety, depression, PTSD and suicide are estimated to be even higher among survivors of the Khmer Rouge — communist fanatics who took control over the country in 1975. More than 1.7 people, about one-fourth of the population, perished during their four-year rule.

The atrocities were appalling. Children saw their parents gutted, babies were smashed against trees and rice paddies became mass graves. Despite widespread hunger, simple suspicion of stealing food was punished by death.

While 2.7 percent of the overall population suffers from PTSD, the prevalence among survivors is 11.4 percent. Thirty percent of survivors suffer from depression and 36.8 from anxiety, according to a 2010 study by the Berlin Centre for the Treatment of Torture Victims.   “When the participants were asked whether they seek help from professional mental health providers, 85.4 percent answered no,” the study found.

The country's mental health burden also affects subsequent generations who did not have to live through the terror of the Khmer Rouge.

Studies found that children of mentally ill parents are more likely to develop syndromes as well.

In Long Beach, California, where thousands of Cambodians found refuge from the communist Khmer Rouge regime, a survey found that half of Cambodian teenagers showed symptoms of depression and often struggled with insomnia.

But in the US, awareness of mental health issues is high, while in Cambodia, the mentally ill are often simply referred to as “crazy” and tied down or, in the case of Rany, locked in a room.

“When I didn't see the giants, I was angry with myself,” Rany said, explaining that the terror she experienced was based on hallucinations. “I cut myself, and my mother had to watch me all the time,” she said.

Since she's been on medication, the hallucinations have receded.

After a maximum of two weeks, Rany will be discharged, following a hospital policy to make room for new arrivals.

On average, the mental ward receives about 300 patients per day, 20 to 30 of them seeking help for the first time. The most severe cases get one of ten beds.

“The government prioritized maternal health and malaria. For mental health, I know that other governments have the money to subsidize that, but we are poor,” he said.

For decades, Cambodia has relied on the work of more than 3,000 registered NGOs. Billions are spent each year on development, from building schools and irrigation systems to malaria and HIV/AIDS programs. But only a handful of aid workers focus on mental health, making it one of the country's most overlooked burdens.

“Mental health is not a priority for donors, but I don't understand why because it affects so many people, but nobody cares,” Thida says.

The German government supports the Royal University's department of psychology as well as the Transcultural Psychosocial Organization (TPO) Cambodia, one of the largest NGOs working in the mental health sector.

Advisor Elizabeth Hoegger, who works with the psychology department, says that neither the government nor donors have placed priority on mental health issues because they are still stigmatized and hard to grasp for many.

“If the estimated numbers are true, then there is an extreme need for action,” she says, pointing to the economic impact of psychological diseases seen in absenteeism, unemployability or suicides.

“But these connections and effects are harder to understand than of AIDS or malaria, and it's also harder to talk about it for donors,” she adds.

Despite the tremendous need, Sophal Ear, author of “Aid Dependence in Cambodia: How Foreign Assistance Undermines Democracy,” says that it isn't surprising that donors lack interest in supporting psychosocial services.

“[Mental health] may not be one of those things you can see on a balance sheet. Anything that takes generations is already too long for donors — who work on a fiscal year or at best 5-year strategic plan basis — to wait around for,” he says.

“Cambodia is not just like every other developing country. A quarter of the population died. You can't sweep that under the rug.”