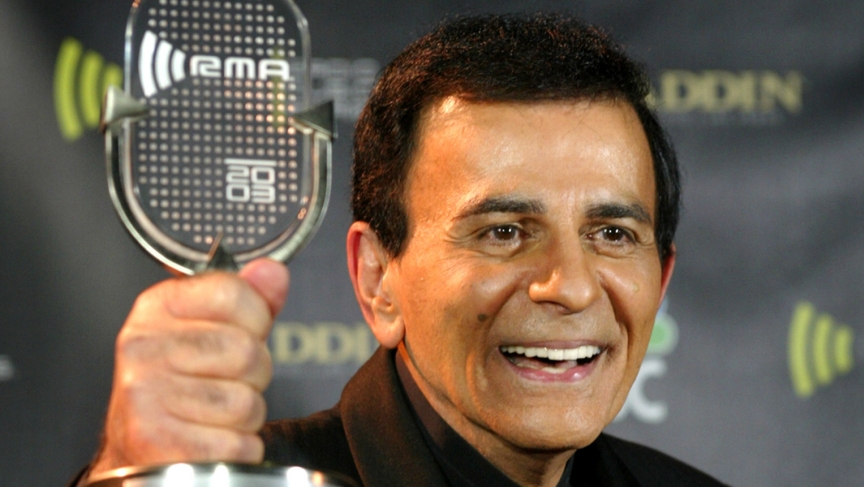 Casey Kasem poses with his Radio Icon Award at the 2003 Radio Music Awards, at the Aladdin Theatre for the Performing Arts in Las Vegas, Nevada, October 27, 2003.

Casey Kasem was a leader for Arab Americans when it came to their identity in the US.

Kasem himself was born Kamal Amin Kasem in 1932; the son of Lebanese immigrants in Detroit. He died Sunday at the age of 82.

James Zogby, president of the Arab American Institute, once wrote that Kasem was "our Arab American Star." Kasem was heavily involved with AAI — helping to co-found the organization with Zogby.

Zogby says it couldn't have been done without Kasem's help.

"Casey was there telling me, don't give up" as we worked to put AAI together, Zogby says. It was his optimism and confidence that kept Zogby going.

The pair first meet in the early 1980s and in 1985 they both met then-President Ronald Reagan at the White House.

Zogby recalls that, before the meeting, they were instructed not to talk to Reagan, but shake hands and smile for a photo. Zogby says Kasem wouldn't have any of that.

"The President walked over and Casey said, 'I want to ask you about why you're tolerating Israel's continued occupation of south Lebanon' and staff literally dove across the Oval Office to break us up, but it was too late," Zogby recalls.

But Kasem didn't use American Top 40, his weekly radio program, as a pulpit to talk about the Middle East or Arab American issues — and Zogby was fine with that. If he mixed the two, Zogby says, "it wouldn't have worked. This was a success story. Somebody who became a celebrity because of the person he was and then took that celebrity power and used it for the good. And it worked beautifully."