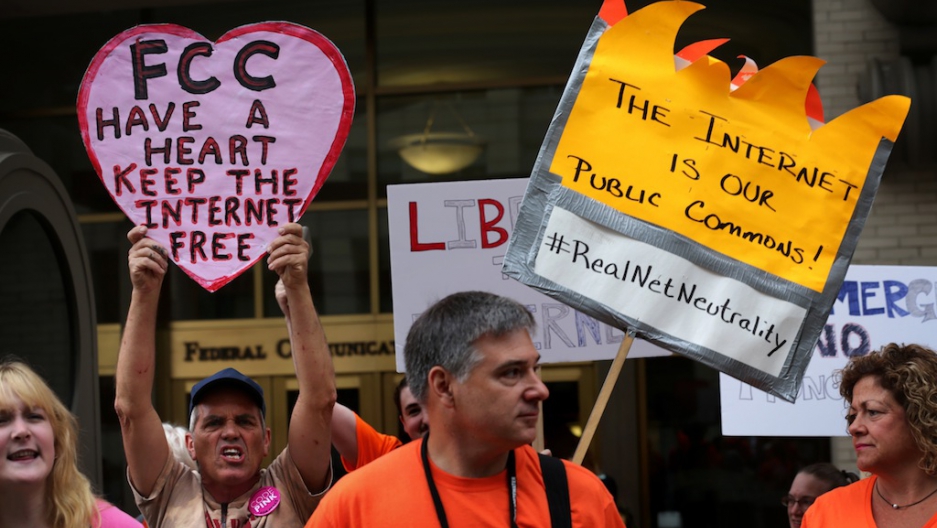 Tighe Barry of CodePink (2nd L), along with other demonstrators, protest outside Federal Communications Commission (FCC) as the commission is about to meet to receive public comment on proposed open Internet notice of proposed rulemaking and spectrum auctions May 15, 2014 at the FCC headquarters in Washington, DC.
Credit: Alex Wong
Share

It’s been one month since the Federal Communications Commission voted to push forward a proposal that critics have said would kill net neutrality, leaving just one more month for US citizens to file comments about the legislation to the FCC’s database, before the first comment period ends on July 15.

The move threw the principle of equal access to information online into the center of a heated debate over whether or not internet service providers (ISPs) should be allowed to create a system of paid-prioritization that would propel some web content forward, while hindering other content — a shift that net neutrality advocates argue would greatly restrict free speech on the internet.

“These implications are most dangerous for — and indeed most likely to impact — smaller and marginalized speakers and listeners; those with the most controversial and least popular ideas who are unable or unwilling to pay,” said Morgan Weiland, a Student Fellow at Stanford’s Center for Internet and Society.

Advocates of net neutrality believe that ISPs, including Verizon and Comcast, are infringing on the free speech of consumers who access legal information on the web. Proponents of the new rules, like Verizon with the support of other large cable companies, on the other hand, have argued that the First Amendment protects their right to deliver content to consumers in any way they see fit.

ISPs must, at some level, prioritize content they deliver online. But with video streaming increasingly consuming more of network capacities, cable companies claim they should be allowed to collect fees for delivering high-bandwidth content, because the way they choose to deliver content is a matter of their free speech.

But Tim Wu, the Isidor and Seville Sulzbacher Professor of Law at Columbia Law School, who first wrote about net neutrality, in January said that cable companies should not be allowed to use the First Amendment to avoid regulation.

Wu and other net neutrality supporters emphasize the consumer’s First Amendment right to access information over a service provider’s right to choose what content gets delivered.

But if cable companies actually do have a constitutional right to free speech, government regulations could be hard to enforce, according to Stuart M. Benjamin, a law professor at Duke Law School.

Without net neutrality laws, some say we can expect more cases like one instance in 2008, when Comcast attempted to secretly slow Bit Torrent — a peer-to-peer sharing service — while, some believe, favoring Comcast’s own content.

In a 2010 case, Verizon versus the FCC, the court said that the FCC could likely enforce net neutrality laws by reclassifying broadband as an “information service,” and placing it under “common carrier” regulations that would treat broadband as a public utility.

Under “common carrier” regulations, ISPs would have to treat all content equally.

So far, FCC Chairman Tom Wheeler, a former cable industry lobbyist, has said the FCC prefers handling decisions on a case-by-case basis, rather than through broad regulation.

Last month’s proposal issued by the FCC aims to prevent content discrimination without reclassifying broadband, which critics argue is a backward and likely ineffective strategy.

Under the proposed rules, the FCC says it will monitor ISPs to prevent anticompetitive behavior, but will not place an outright ban on paid prioritization.

As per its current regulations, the FCC will also not allow ISPs to provide slower speeds than customers have already paid for, nor will it allow ISPs to block access to any legal content.

However, there could be systemic issues affecting the future of free speech on the web that may be missed in the current debate, and which go beyond the FCC’s proposed rules.

The problem lies in how ISPs control high-speed internet in the United States, which “is one of captive monopoly,” Andrew McLaughlin, former Deputy Chief Technology Officer for President Obama, and former Vice President of Tumblr, said in an email.

Cable companies maintain local monopolies in many parts of the US and often charge high fees for slow service compared to other countries. According to the Net Index, by internet metrics company Ookla, the US ranks 32nd in the world in its cost-to-speed ratio for internet access, and 19th accounting for per-capita GDP.

There is generally more competition between ISPs in Europe, where some countries, including Germany and France, have net neutrality laws.

If there is a certain level of competition, it is not in an ISP’s interest “to start slowing down services that consumers really like,” Joshua Gans, who holds the Jeffrey S. Skoll Chair of Technical Innovation and Entrepreneurship at the University of Toronto, told GlobalPost.

Gans said he believes the FCC’s proposed rules for an open internet are necessary.

“The way we’ve gotten competition around the world is by regulating,” he said, comparing internet regulation with regulating phones and telephony.

Every “connection into your house [besides the internet] has been regulated by the government,” he added.

Yet even strong net neutrality laws, opponents of net neutrality point out, might not prevent big companies, like Netflix, from storing content at ISPs’ local data centers, creating private lanes beyond the FCC’s regulation.

Still, some think failing to regulate could encourage conflict-of-interests, where ISPs are inclined toward censorship, prioritizing their own content, or possibly even creating a sterile version of the web, as suggested by Columbia University’s Tim Wu.

This is something to avoid, net neutrality advocates say.

Currently, apps or service providers “risk having their message blocked or slowed because they didn’t pay the ISP,” said Morgan Weiland, of Stanford’s Center for Internet and Society.

And individuals could loose “the power to control what speech they are exposed to,” she added.

Some advocates believe that municipal broadband or public-private partnerships could help solve structural issues in the way internet service is provided.

Finland presents an example of one alternative, where public pipes are put in place once, which private companies then use to provide their services, Susan Crawford, a Harvard Law professor and co-director of Harvard’s Berkman Center, said in a 2011 interview for the Berkman Center.

This is ideal for consumers, Gans explained, because consumers “own the connection into their house, and then they can choose [the ISP] it goes to.”

For example, someone could switch to a different ISP if their own slowed down a certain content provider.

“Consumers would get options,” Gans said.

Although there is widespread dissatisfaction with the way high-speed internet is delivered in many parts of the country, there would also be great difficulty in replacing the current system.

For one, some doubt whether a widespread municipal or public-private alternative could work in the US, without being exorbitant to install and maintain.

Additionally, many of those who support an open internet, including FCC Chairman Wheeler, believe that reclassifying broadband to enforce strong net neutrality laws would do more harm than good.

Cable companies argue that this could strangle innovation and limit investment in improving high-speed internet access.

Still there is a general agreement in mainstream media that something needs to be done.

In five years, startups will face a much more difficult climate, “if the default position of Comcast,” is charging fees to access a fast lane, said Gans.

McLaughlin, the Obama administration’s former Deputy Chief Technology Officer, said he thinks the FCC’s proposed rules are necessary, but also that reclassifying broadband internet as a telecommunications service would be a viable option.

“Reclassification doesn't magically resolve net neutrality concerns,” he wrote, “the FCC still needs to grapple with what is and isn't OK.”

Weiland said the new rules would also present problems for the press, and could especially harm news startups online.

“If they not only have to pay ISPs for prioritization of their traffic, but also fear discrimination if ISPs don’t like what they have to say, that has a potential chilling effect on the press,” she explained.

None of the FCC’s five commissioners, who were contacted by phone or email, as well as a separate request through the FCC’s press office, could be reached when asked to comment last week.

“We're hoping to hear from as many people as possible about this critical issue… I'm a strong supporter of the Open Internet, and I will fight to keep the internet open.

Below is a timeline of events in the fight for net neutrality.