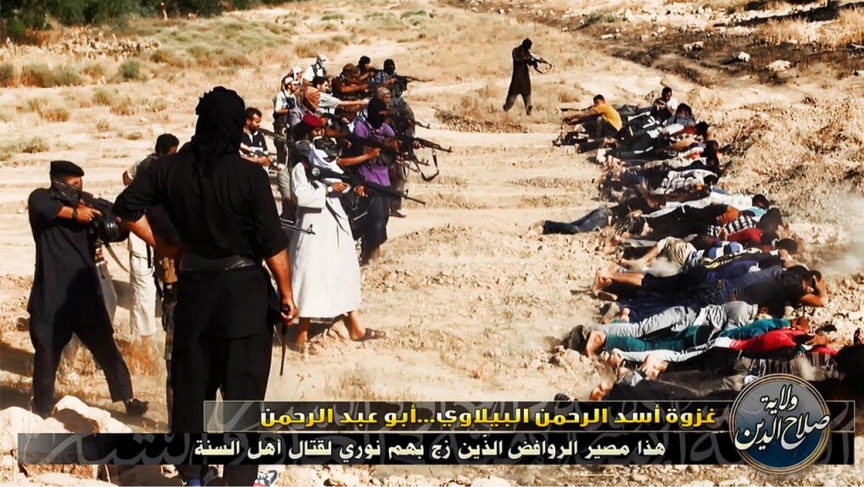 A still shot from one of the videos posted by ISIS purporting to show the killing of captured Iraq government personnel.

The United Nations human rights office says it has corroborated reports of a massacre in Iraq. Islamic rebels, known as ISIS, claim to have shot dead 1700 captured Iraqi government soldiers and security officials. The rebels have released video and still images of the purported killings.

But not everyone is rushing to judgement. The New York-based non-profit organization Human Rights Watch is making its own efforts to verify the images.

“We have to make sure these pictures are not staged,” says Peter Bouckaert, Emergencies Director for Human Rights Watch. He says ISIS is trying to provoke a sectarian conflict. But he adds “we have no indication at the moment that they are (staged).”

“What we have been able to establish so far is that these images come from the city of Tikrit,” says Bouckaert.

“They show a sequence of people being detained and then taken to a site nearby where they appear to be executed,” Bouckaert says. “We have been able to locate both the place where the pictures of the detainees were taken, and then the execution site itself in Tikrit, using satellite imagery and matching features in the area.”

He says that means these images were certainly taken in Tikrit itself. The city only fell to the militants on Thursday. He says that proves these “are not images that are taken from previous incidents of sectarian violence re-circulating on the internet. These are recent images and they did come from Tikrit.”

Bouckaert says they now have satellite images from this morning and will try to locate the actual trenches where the victims were lined up and shot.

He says they are also trying to find any possible eyewitnesses on the ground.

“It is interesting to see that the techniques shown in these videos are very similar to the 1991 mass executions” that took place in the aftermath of the failed Shia uprising after the first Gulf War. “The fact that people are trucked out to these execution sites, and that there’s pre-prepared trenches dug by bulldozers, then they’re lined up and executed. It’s almost identical to what the Iraqi security forces did in 1991.”

“It’s also different from what ISIS has been doing in Syria,” he adds. “They’re not the kind of executions that we’ve been seeing in Syria from ISIS.

“There certainly are strong indications that these (images) are authentic,” Bouckaert says.

Bouckaert says Human Rights Watch has received reports that Islamic militants are going house to house in Tikrit, searching for government soldiers being hidden by local families. He says, if found, they are being invited to join the rebels or die.