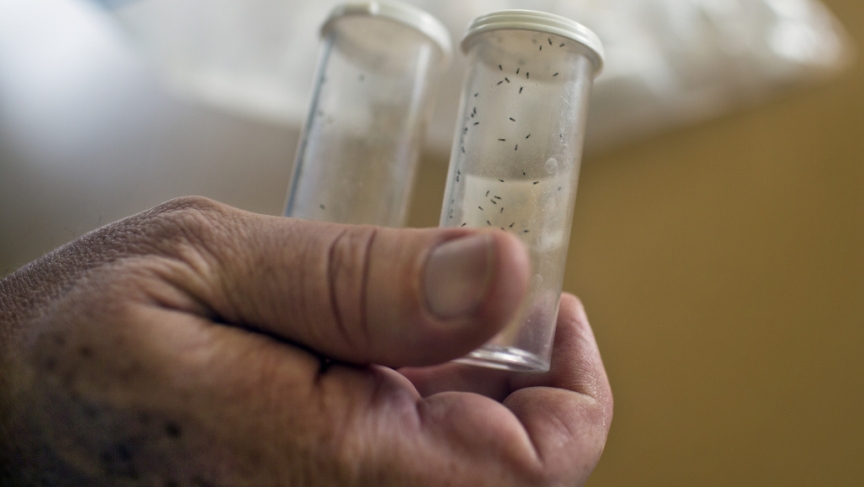 A vial contains Tamarixia radiata wasps, the size of a grain of sea salt. They are stored inside incubators before they are released to feast on their natural prey, the Asian citrus psyllid.

An invasive pest called the Asian Citrus Psyllid is turning up in lemon, orange and lime groves. The bug sometimes carries a disease known as Citrus Greening, which can wipe out acres of crops.

As the name implies, the psyllid comes from Asia, though it has since spread to the Middle East and Africa. It showed up in the US over a decade ago.

But scientists may have found an answer in the form of a Pakistani wasp that lives to attack the psyllid. Its scientific name is Tamarixia radiata, says David Morgan with the California Department of Food and Agriculture, who is part of a $1.4 million state project to breed and release the Tamarixia wasps into the wild.

These aren’t your typical yellow-jacket wasps.

"They are ridiculously small," Morgan notes, adding that each insect is about the size of a grain of sea salt, making them much too tiny to sting a person.

They are, however, the perfect size to hunt down the miniscule Asian citrus psyllid. The wasps are experts at finding citrus trees, where the psyllid feeds on leaves. Once it finds a psyllid, the wasp will puncture a hole in the pest and suck out its juices, "just like a vampire," Morgan notes.

Things get even more gruesome for the psyllids when the wasps reproduce, explains Grace Radabaugh, also with the CDFA.

First, the female Tamarixia wasp stings a citrus psyllid, paralyzing it. Then it lays an egg under the helpless bug.

When the egg hatches, Radabaugh says, the wasp larva begins to feed on the slowly dying psyllid for several days.

When it's strong enough, the wasp then chews through the now mummified psyllid corpse and pops out the top of it.

"They emerge right out of that, like the science fiction movies," she says, alluding to the 1979 sci-fi classic "Alien," in which a larval alien gestates within the body of a human host.

"They are a fascinating creature," Radabaugh says.

California researchers have bred and released hundreds of thousands of Tamarixia wasps since starting the program last year.

Of course, using one invasive critter to combat another may seem like a recipe for unintended consequences. But it’s not the first time scientists in California have tried this approach.

Mark Hoddle, a pest expert with the University of California, Riverside, says a similar effort was launched way back in the 1880s, when a bug from Australia called the Cottony Cushion Scale was devastating the newly founded US citrus industry.

Hoddle says researchers tracked down a type of Australian ladybug that ate the Cushion Scale and released it in the states.

“Within six to eight months, Cottony Cushion Scale populations had been completely devastated in California,” he says.

You can still find both bugs in the state but in much smaller numbers.

As for releasing the tamarixia wasp here, scientists say extensive research shows the wasps won’t eat any bug but the psyllid, so there’s little danger they’ll wipe out their enemy and start snacking on something else.

Still, because of this dependent relationship, the wasps tend to create equilibrium with the psyllids, rather than wipe them out, says Philip Stansly, with the University of Florida.

"They are not going to wipe out their only source of food. They are not stupid," he says of the wasps.

Stansly helped launch a similar wasp program in Florida, but he says the wasps only slowed the spread of citrus greening a little.

"The biological control program is not a silver bullet solution for Asian citrus psyllid,” UC Riverside's Hoddle admits. But he says that some help is better than none.

And, he adds, the wasps are starting to spread on their own in the wild and may one day be able to curb psyllid populations by 50 percent.

He is also seeking approval from the federal government to release a second type of wasp, Diaphorencyrtus aligarhensis, which also attacks the psyllids.

Even the federal government sees the Pakistani wasp as a key player in this fight. The US Department of Agriculture offered $1.5 million to ramp up wasp breeding programs across the country.