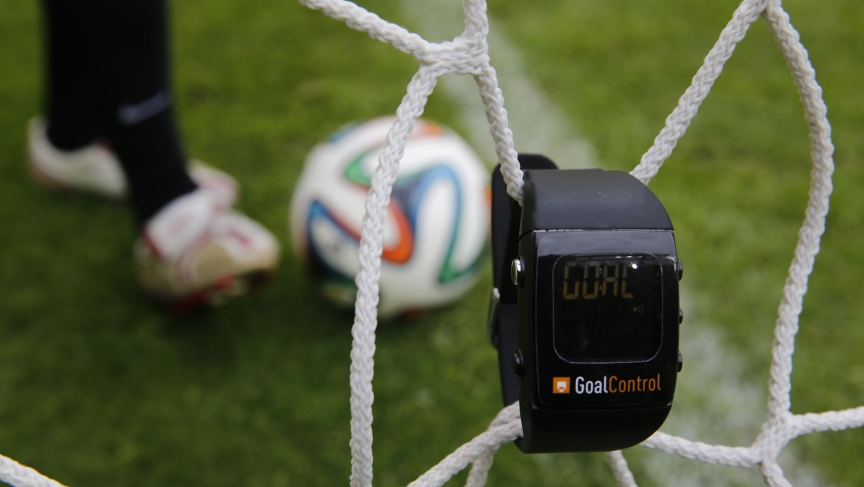 A GoalControl watch reads "goal" as a football rolls fully behind the goal line during a demonstration in the western German city of Aachen May 28, 2014. German firm GoalControl has been appointed by FIFA as the official provider for the goal-line technology at the upcoming 2014 soccer World Cup in Brazil.

Day five of the World Cup in Brazil and there’s been a lot of good games and of course the requisite questionable calls. The first Brazilian penalty kick? Come on.

But one call that no one can dispute happened on Sunday during the match between France and Honduras.

France striker Karim Benzema kicked the ball into the goal post. The ball straddled the goal line but never crossed the line, that is until it bounced off of Honduran goalkeeper Noel Valladares.

It all happened in a split second. But split seconds is all that the goal technology being used at the games needs to make a determination. A goal was declared for France.

“What a lot of people didn't realize, me included I might add, is that the goal line technology adjudicates every time the ball is near the goal,” said Peter Walton.

Peter Walton knows a thing or two about the pressures of a bad call. He’s a former ref with the English Premier League and he now heads the organization in the states that oversees officiating for Major League Soccer.

The situation on Sunday, according to Walton, is a perfect example of technology getting things right.

“I think the pressures that our referees are under means that any advancement in technology that will help them get those factual decisions correct — and ball over the line is a fact — then it’s a must for me.”

The technology being used in Brazil is advanced indeed. Fourteen cameras and a sensor on the goal line monitors whether the complete sphere of the ball rolls over the line. These are rapid fire cameras according to Walton, taking more than 500 images per second. And the decision happens just as quickly.

Once the computer judges that the ball has crossed the line it sends a signal to a watch that all four match officials are wearing.

“The watch will say ‘goal’ — and not only that it vibrates, so the ref will know instantaneously,” he added.

Walton admits that this sort of technology would’ve come in handy a few times during his days as a referee. He remembered a snap decision he made during one English match he was officiating. He called a goal after his sideline ref saw the ball roll over the goal line. But as he walked back to the center of the field to restart the game, the “goal” was re-played on the scoreboard. Except, it was clearly not a goal.

“And all 40,000 people in the stadium saw that [the ball] clearly hadn’t crossed the line and you can imagine what my game control was like during the rest of the game unfortunately,” he recalled.