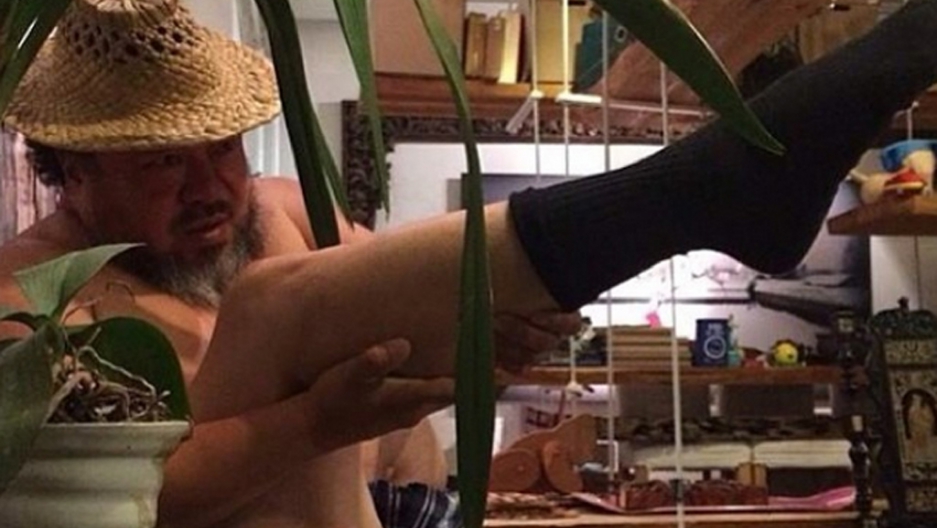 This Instagram photo posted June 11, 2014 by Chinese dissident Ai Weiwei has sparked a new internet meme of people posting with their legs as guns. Ai says the photo was a statement about the overuse of power in fighting terrorism.
Credit: Ai Weiwei/Instagram
Share

But for very serious reasons.

The leg-gun meme started five days ago, when Ai Wei Wei posted a photo of himself on Instagram brandishing his leg like a gun wearing underwear, a straw hat and little else.

Hundreds of Chinese and others on social media have followed suit, some tagging their posts with the hashtag #endgunviolence. They have posed on sidewalks and in bedrooms, in front of troops, on horseback and even staged scenes of assassinations.

So just what is this all about?

No one was quite sure until Ai spoke with the Washington Times, telling them the original post was meant as a statement about the overuse of power in fighting terrorism.

“People from all over the world have been experiencing panic because of terrorist attacks such as 9/11 and problems such as the existence of weapons,” he said.

“Power is being overused in the name of counterterrorism."

Police in Shanghai and elsewhere are now carrying guns for the first time amid an anti-terror crackdown sparked by several high-profile attacks on citizens in the past year. Subway security has been tightened, and dozens of people have been arrested in and around Xinjiang.

Here are some of the more amazing leg-gun photos posted in recent days: