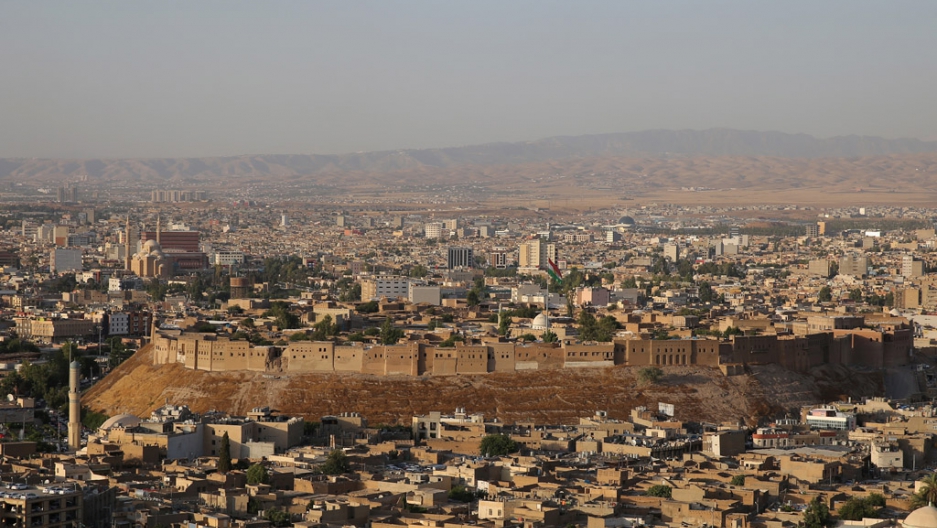 But it's not the Al Qaeda-inspired extremists who took over his hometown that have him worried. No, he’s scared of what his own military might do next.

Ahmed, who asked to be called only by his first name, is among the more than 500,000 Iraqis who fled their homes as fighters from the Islamic State of Iraq and the Levant (ISIL) and local Sunni militias swept northern Iraq this past week. Ahmed and his family came to Erbil, 55 miles east of Mosul.

Hundreds of people were killed, many of them summarily executed, after militants overran Mosul. On Sunday, security forces launched a counter-offensive in northern Iraq, and had wrested two towns north of Baghdad from rebel control, according to media reports.

Dressed in a light grey robe on Saturday, Ahmed stood in a park outside the historic citadel in Erbil, located in Iraq's semi-autonomous Kurdish region, which is safe, relatively speaking, and protected by well-trained security forces.

It's a hot summer evening and the place is packed, mostly with refugees like Ahmed who are staying in cheap hotels nearby.

Ahmed says he expects Iraqi Prime Minister Nouri al-Maliki to try and take Mosul back by force. He described a scenario reminiscent of recent events in Iraq's southern Anbar province, where government forces have been battling militants since January.

"When the Iraqi soldiers come back they will drop every kind of bomb on us and shoot everyone," Ahmed said.

At the moment in Mosul, Ahmed says he hears life has improved since the Iraqi military melted away and extremist fighters seized control.

"They took down the checkpoints," he said. "It used to take three hours to drive from one street to the next, now it only takes three minutes."

He called the Iraqi military an occupying force and described negotiating checkpoints as a daily humiliation.

Following the outbreak of Iraq's bloody civil war in 2006, many cities became mazes of concrete blast walls and traffic-slowing checkpoints. Residents initially greeted these developments as good faith efforts to stop car bombs and improve security, but in the years that followed people grew resentful.

Other families near the citadel have similar things to say about the sunny reports they are getting from back home over the past few days. They say extremist fighters have restored water and power to Mosul, and that they are selling cheap gas and going door to door pledging not to harm residents.

The fact that many Mosul residents embrace the extremist fighters led by ISIL as liberators, shows how deeply Iraq's Sunni community distrusts Maliki's government and the military he controls.

Iraqi soldiers who have also fled to Erbil, many simply abandoning their weapons and uniforms, blame the allegations of mistreatment and corruption on their commanders, saying they were "just following orders."

Zaid Al-Ali, a former legal advisor to the United Nations in Iraq, says he is not surprised by the initial warm welcome ISIL is getting in Mosul. He credits the group's decision restore freedom of movement to the city.

"Those checkpoints were a real pain for everyone," said Al-Ali, who is also the author of the recently published book, "The Struggle for Iraq's Future: How Corruption, Incompetence and Sectarianism Have Undermined Democracy."

He says it wasn't just that many considered security measures unnecessary or that they caused traffic, but they were a "constant reminder that you weren't free to go about your daily business in your own city."

But Al-Ali says he doesn't expect Mosul residents to stay happy with ISIL rule for long.

"It's all just fresh. It's very, very new. People haven't had a chance to really start chafing under the rule of [ISIL]. That's gonna come, but its a few days or a few weeks away."

Thirsty Iraqis fleeing cities in the north wait to get into Erbil. (Susannah George/GlobalPost)

Meanwhile, families continue to flee Mosul and head to Iraqi Kurdistan. Outside of Erbil, on the road to Mosul, there are long lines of cars backed up at the main checkpoint, waiting to gain entry.

On the other side of the highway, a handful of cars are making the opposite trip, back home to Mosul.

One man stands beside his car, with his wife and children in the backseat. He says he's nervous about going home, but he has no choice. He's running out of money and they don't have a place to stay in Erbil.

"Our destination is unknown," he said, asking to remain anonymous. "We don’t have any expectations, anything could happen good or bad."

He says he's heard good reports from Mosul. People are out buying groceries and gas stations are open, but he isn't convinced it will last. "The situation is not stable. We don’t really know what is going on.”

A family from Mosul is making the trip back home after fleeing four days ago. (Susannah George/GlobalPost)