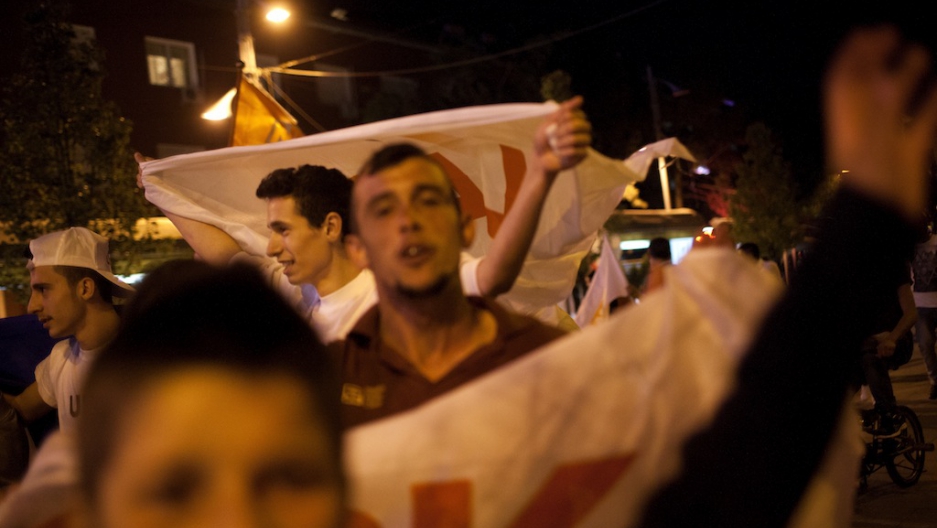 Supporters of the Democratic League of Kosovo and its coalition take to the streets of Pristina, Kosovo on June 10, 2014 to support a constitutional attempt to disallow Hashim Thaci from becoming prime minister after his coalition won parliamentary elections. The matter has been referred to the courts to determine how a new government will be formed.
Credit: Ron Haviv/VII
Share

PRISTINA, Kosovo — There were no big parades, no visible celebrations and hardly a public mention of the fact that Thursday marked the 15th anniversary of the Day of Liberation here.

It was June 12, 1999 when NATO troops rolled into this city after pushing back the Serbian army and local Serb paramilitary units’ campaign of intimidation, killing and ‘ethnic cleansing’ of the majority ethnic Albanians in what became a dark, closing chapter of the Balkan wars of the 1990s.

I was on the ground here then, covering the war in Kosovo and it has been stunning to return all these years later and see just how far the country has come in rebuilding. It’s no longer a war-torn backwater, but a modern, wired city seemingly poised to face some big challenges ahead.

That said, it was interesting to see that this relatively new country couldn’t find the time to remember its own liberation narrative in part because it has been consumed in recent days by a political drama with enough intrigue, allegations of corruption, slick Washington consultants and bare-knuckle partisan brawling to make for a full season of ‘House of Cards.’

At the center of this episode is Hashim Thaci, the handsome, legendary head of the Kosovo Liberation Army who Vice President Joe Biden once called “the George Washington of Kosovo” and whose incumbent party received the most votes in the parliamentary election on June 8.

Now, less than a week after the vote, Thaci is suddenly facing a challenge from a coalition of several opposition parties who want to block him from taking the prime minister’s office, a dramatic political move that seems to have turned a relatively orderly election into a brewing constitutional crisis.

Thaci and his Democratic Party of Kosovo won about 31 percent of the vote in an election that was seen by observers here as free and fair and which notably included the ethnic Serb minority voting in small but significant numbers. The election was initially viewed by the international media as a modest step forward for Kosovo’s democracy, certainly compared to the last election which was marred by voter fraud and violence and a boycott by ethnic Serbs in the north of Kosovo.

The key issues in this election were high unemployment and low wages, and Thaci has vowed to address these concerns. But Thaci has also been shadowed throughout the campaign by allegations that he had knowledge of and perhaps command responsibility for a network of fighters who stand accused of corruption, murder and the trafficking of human organs. The charges of war crimes which Thaci may ultimately face stem from a series of at least four investigative reports by the Council of Europe and NATO that date back as early as 2004.

The existence of these reports and the questions they raise about Thaci were first uncovered three years ago by a GlobalPost Special Report by investigative reporter and Pulitzer Prize winner Matt McAllister.

Now the allegations — specifically that Thaci and four top members of his party are accused in a 2011 Council of Europe report of corruption, murder and the harvesting and selling of organs from Serb prisoners of war during the 1998-99 conflict — are in the hands of a special task force on war crimes appointed by the European Union. The task force is expected to release its findings soon. Thaci has consistently denied the allegations and insists the tribunal will prove them to be false.

Critics in Kosovo believe all the smoke has finally revealed some fire and that this time Thaci will feel the heat. Among those critics is Veton Surroi, a former representative in the Kosovo Assembly and the founding publisher of Kosovo’s leading newspaper, Koha Ditore.

“This is a political thriller for sure,” said Surroi, who consistently refers to Thaci as “the snake,” referring to Thaci’s own nom de guerre when he was a KLA commander before he became the interim prime minister immediately following the end of the war in 1999.

Surroi has recently authored a new book titled “The Legs of the Snake,” which explores the allegations against Thaci and the wider culture of corruption in the government.

Sitting in a café in downtown Pristina on the country’s Day of Liberation, Surroi reflected, “How could we be liberated on the 12th of June. And then allow state capture on the 13th by the snake?”

“The end of the snake’s regime will be a true liberation,” he said, predicting that this parliamentary challenge by the opposition parties would succeed in unseating Thaci as prime minister.

With presumed help from top Washington political consultants he’s hired including the elite and expensive firm of Patton Boggs, it looked like Thaci had honed his economic message and thereby dodged the political bullet of the pending investigation into purported war crimes.

They have banded together in what they claim is a majority block of parliamentary seats, with the necessary majority of 61 votes in parliament, that should appoint the new prime minister. Adding some street theater to the political machinations, demonstrators from the opposition parties took to the streets with party flags waving and shouting down Thaci.

Under Kosovo’s constitution, the president will give Thaci a chance to form a ruling coalition, but it remains unclear what would happen if he failed to do so. Some observers predict the case could end up before Kosovo’s High Court for a ruling.

The plot thickens. And in the end of the day, perhaps the obsession over this political drama here is a relatively healthy diversion for a still-divided country that suffered a brutal war. Maybe the democratic process, warts and all, is necessary here for all sides to come together to face the serious challenges of a newborn country that needs to move forward with its own destiny.