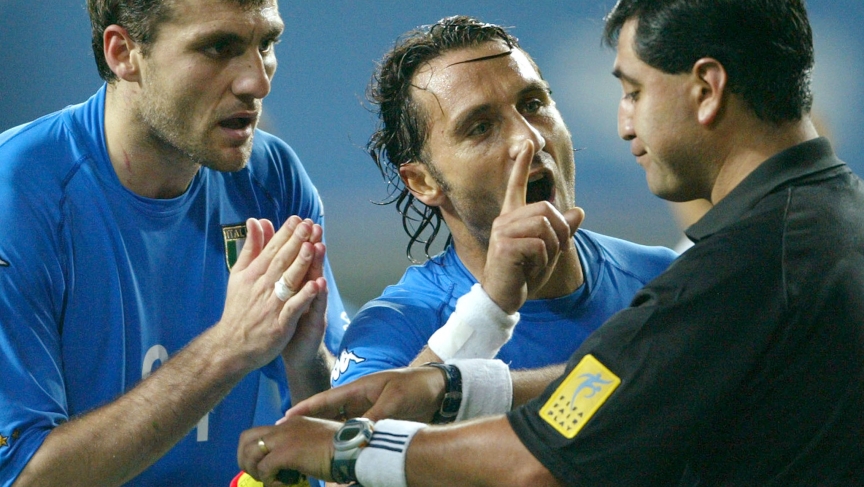 Italy's Angelo Di Livio, center, and Christian Vieri, left, protest as referee Byron Moreno of Ecuador holds both yellow and red cards after he sent Italy's Francesco Totti off in extra time against South Korea during a second round World Cup finals match in Taejon, June 18, 2002.

We all make mistakes, right? But sometimes the consequences can be huge.

Take the strange case of Byron Moreno. Ecuadorian-born Moreno was a soccer referee.

He refereed at the World Cup in 2002 in South Korea and his actions during a game between Italy and South Korea put him in the history books.

The referee was vilified by outraged Italian fans when host country South Korea eliminated Italy 2-1 in overtime, aided by a pair of questionable calls by Moreno.

Moreno wrongly ejected Italian star Francesco Totti and overturned what appeared to be a game-winning goal by Italy.

After the cup, Moreno returned to Ecuador, resuming his refereeing career while campaigning for a City Council seat in the capital, Quito His campaign slogan was "Red Card to Corruption."

Moreno was soon suspended for 20 games after he was accused of rigging a game to ensure the Quito team would triumph and that voters would remember his role in the victory.

“He awarded six minutes of added time at the end of a game, which seemed very long to people who were there," said John Doyle, a columnist for the Globe and Mail and the author of The World Is a Ball: The Joy, Madness, and Meaning of Soccer. "Then he actually let the game go on for almost 13 minutes."

Liga de Quito scored an equalizer in the 99th minute, then won the game in the 101st minute. Moreno was also accused of falsifying the minutes on the official match report.

Doyle wrote about Moreno and his life after he retired from refereeing.

"He became a TV pundit in Ecuador. He also accepted invitations to go to Italy to appear on TV shows," said Doyle. "These were satirical TV shows in which he was made fun of, he was mocked. He let himself be humiliated, because, I would guess, he got a free trip to Italy and probably got a substantial fee for it."

But Moreno continued to make bad judgement calls. In 2010, Moreno boarded a flight to New York from Ecuador.

His was carrying 10 clear plastic bags packed with 13.6 pounds of heroin; all attached to his stomach, back and legs, authorities said. A body search found the drugs and he was held without bail.

Moreno may be an extreme case, but the problem of poor World Cup refereeing falls on soccer's governing body, according to Doyle.

"FIFA insists on having not the elite referees of the world, but a representative group of referees, that is referees from all the regions in the world where soccer is played. So you can have somebody like Moreno, from a small country where soccer is popular but is not intensely played as it is in other countries. You can have referees who have never handled a truly big game, like a World Cup," he said.