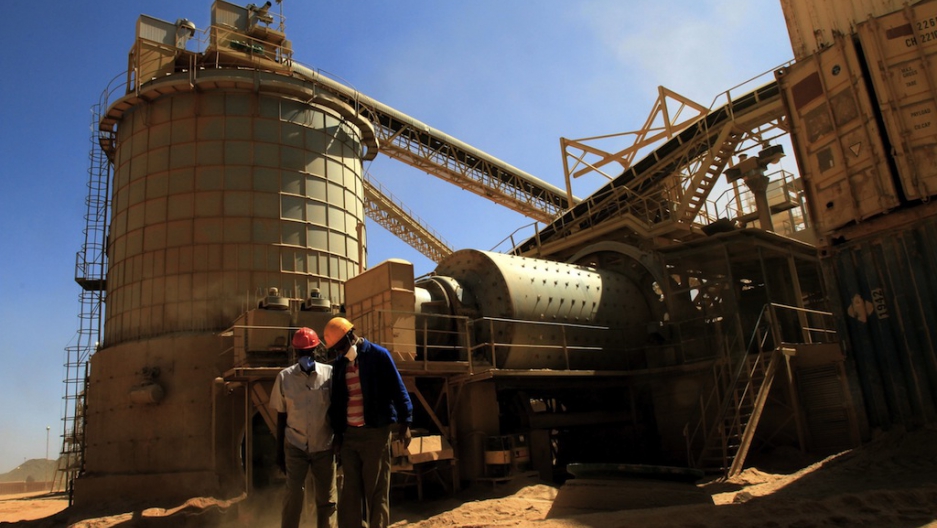 Gold mines in Eritrea (like this one pictured in Sudan) have been accused of using forced labor in a new report by Human Rights Watch. The Eritrean government forces all able-bodied men and most women into a national service system and sometimes "loans" workers to foreign companies, like Canadian mining firm Nevsun, which operates the first mine in the country.
Credit: ASHRAF SHAZLY
Share

Laborers in the worst countries for workers face these and other threats every day over basic rights like sick leave, fair pay and humane working conditions, according to a new report by the International Trade Union Confederation.

In the map below, darker shades represent fewer protections for workers.

Here's a look at six of the worst countries for workers, according to the report, and why they're so bad:

The CAR is among eight countries with the worst ranking of 5+. Torn apart by war, CAR offers no guarantee of workers rights. The country has been in chaos since the Seleka rebel alliance captured the capital and ousted President Francois Bozize in March 2013. Three aid workers were among 22 killed in an attack by gunmen at a charity hospital in April, and the country's only centralized union was dissolved in 1981 by the Dacko regime. Child labor is common, and the Ministry of Labor and Civil Service has never defined or enforced health and safety standards in the workplace.

Workers demanding better conditions in Cambodia are subject to unfair dismissals, intimidation, arrest and even violence, according to the report. In January, Cambodian police opened fire on garment workers demanding a higher minimum wage at a protest in Phom Penh, killing three people and wounding more. Several protesters were arrested, and others were beaten by police at separate rallies demanding better wages earlier this year. At least 500 workers have fainted at garment factories this year alone, and more than 4,000 have dropped unconscious at work in the past four.

There is no facet of the Syrian economy that four years of civil war and untold violence has left untouched. While there is a minimum wage mandated by law, median wages in Syria have hit new lows and workers face the threat of death by bombing or other attacks daily. Corruption is also an issue, and almost half of Syria's 5 million-strong labor force is unemployed, according to a United Nations report that warned the country's economy is "headed into ruin." Many businesses have closed and workers have fled to neighboring countries in search of something, anything, better.

China is well-known for its low wages and labor laws that prohibit independent trade unions and limit the right to strike. While work at the Chinese operations of IBM, Pepsico, Nike, Adidas and Walmart, have all been idled by labor protests this year, some experts say communist leaders are only putting up with the strikes in hopes of rebalancing a slowing economy. Working conditions are still abymsal in many industries, with an average of 200 workers killed on the job EACH DAY. Up to 6 million workers across the country are plagued by respiratory illnesses often caused by exposure to dust, which builds up in the lungs.

Belarus is now part of the Eurasian Economic Union, a new ecomomic bloc that included Russia and Kazakhstan. Some have called it Russian President Vladmir Putin's attempt to provide a counterweight to economic and political powerhouses like the European Union and the United States. But while its benefits include "equal" education and employment opportunities across all three nations, the union's codes mention nothing about wages or labor unions. Independent unions were largely swept away with the 1994 election of Belarusian President Alexander Lukashenko. The country's wages remain among the lowest in Europe at just under $500 per month, while the cost of living continues to rise.

The inclusion of South Korea may come as a surprise to many, but one of the country's largest employers, Samsung, has been accused of using as many as 10,000 illegal workers. It also blocked the formation of labor unions for years. Up to 1,400 workers defied that policy and formed what is thought to be Samsung's first union last year, but have been pressured to dismantle it by executives ever since. In October 2013, Samsung service center worker Choi Jong-beom committed suicide over low wages and harsh working conditions at the company. He claimed he had been skipping meals to keep up with a work day that started at 7 a.m. and didn't end until 9 p.m. He had no days off.