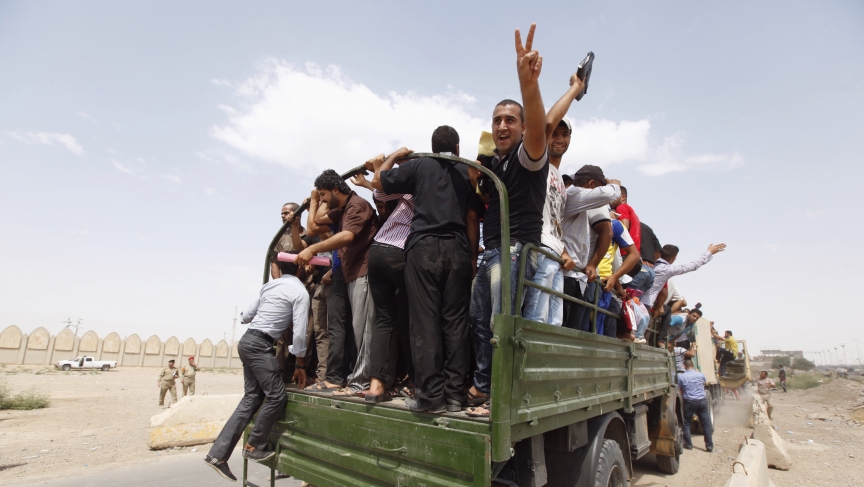 These are a few of the young Baghdadis who volunteered Friday to join the Iraqi Army as ISIS jihadis closed in on the capital.

The government of Iraq is scrambling to organize a defense of the capital, Baghdad. Senior clerics have been enlisted to help urge young Shi'ites to defend their hometowns, their sect and its holy places.

Hundreds have already volunteered. Sunni Muslim forces — after taking control of much of northern and western Iraq in just a few days — are now battling government forces in Samarra, about 70 miles due north of Baghdad, and in Diyala province just to the northeast of the Iraqi capital.

“Local residents in Baghdad are really apprehensive and very scared about what is going to happen," says journalist Ayub Nuri, “because they’ve heard that the Islamic militants — some of them — are in the outskirts of the city, and they’re preparing an all-out assault on the city. They don’t know if the government army is going to (be able) to protect them.”

Nuri is a Toronto-based editor with the Iraqi Kurdish news service, Rudaw. He gets his information from a network of several dozen reporters across Iraq and from friends and sources back home.

There’s no evidence yet that the rebels have reached the edge of Baghdad, but the rumor mill is running full tilt. “There’s fear on the streets of Baghdad,” Nuri says.

“The only hope they have,” says Nuri, “is that the Iraqi army has a stronger presence in the capital, and they’re hoping that it will not face the same quick defeat as it did in the other Sunni cities. And they think that because the government itself is seated in Baghdad, hopefully it will defend the city better.”

In just a few days, the Sunni militants have seized control of a huge swath of Iraq, against anemic resistance from the Iraqi government army. The militants have been welcomed with open arms by the region’s Sunni Arab population. “I believe,” Nuri says, “this is the first time in the [Middle East] region that an Islamic group has some genuine local sympathy.” The reason, he says, is the deep frustration with the Shi’ite-dominated government of Iraq, that has suppressed even their modest political demands.

Nuri says there is also a lot of hostility among Sunnis toward the Iraqi army and security services for rounding up young men and boys at random and accusing them of being supporters of Saddam Hussein’s old political movement, the Ba’athists.

These grievances became so deep, says Nuri, “that they finally saw salvation in these Islamic militants.”

There are plenty of former Ba’athists around, says Nuri. The soldiers and officers of the old army who were “dishonorably discharged” in 2003. He says his sources tell him that many have now joined the militants, and make up perhaps half the rebel forces in Mosul.