By the time Borja Bernardez got home it was nearly three in the afternoon, and he was hungry. But there was no time for lunch. He had applied to join the Spanish navy and exam results were about to be posted online. Borja made a beeline for his computer.

Borja, now 27, dropped out of high school during his last year to pursue welding. After learning the trade, he quickly found work at Navantia, one of the largest shipbuilding companies in the world and a major employer in his hometown of Ferrol, a port city on the northwest cost of Spain. It paid well. As an apprentice he was making up to 2,000 euros a month.

“I was building ships for the navy and was earning more than the people in the navy,” he said. “It was great.”

By the mid-2000s, Spain had abandoned its conscript system but the economy was still growing, and the military was frantic for recruits. “[The ships] were operating with less people than they needed,” said Fernando Alvarez, the captain of the Blas de Lezo destroyer and a 30-year navy veteran. At the time, he says, the navy relied heavily on immigrants from Central and South America to man the boats, as they were among the few who were willing to do the job.

But over the last decade circumstances have changed for young Spaniards like Borja. The real estate boom is over, the construction bubble has popped, and the economy is on the skids. With the country’s youth unemployment rate above 50 percent, young people are clamoring for work. 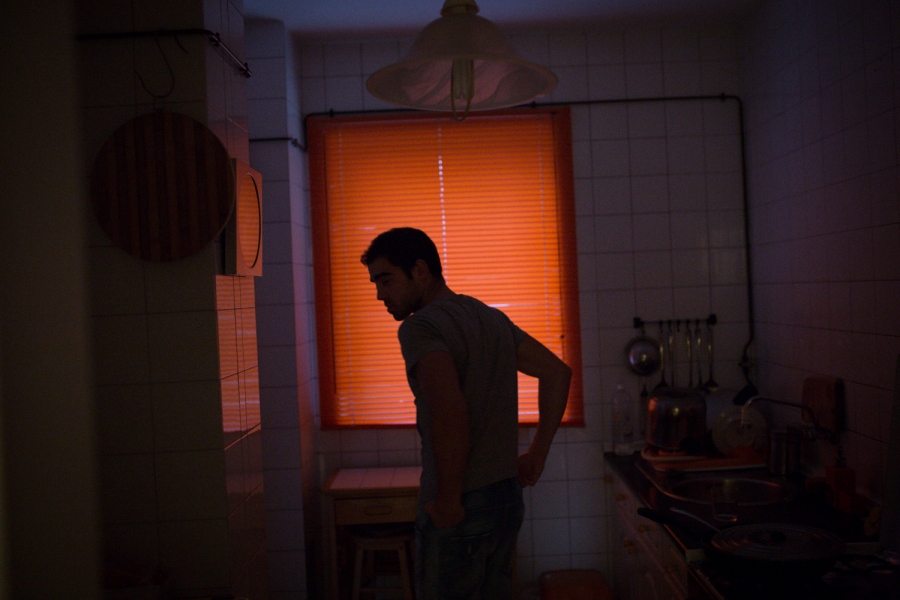 Borja Bernardez, 27, had a good job before Spain's economy collapsed. He's pictured at his home in Ferrol, Spain.

As a result, getting into the navy has gone from being a sure bet to a long shot, with acceptance rates in the single digits. In 2013, the Spanish armed forces offered 1,500 spots (300 of them in the navy) to more than 40,000 applicants.

“Any job opportunity is desirable,” said Oscar Marcenaro-Gutierrez, an associate professor of economics at Malaga University. “[But] public sector jobs are particularly appealing as they are associated with higher stability. On top of this, the average salary is 46 percent higher in the public sector than in the private sector.”

The situation in Ferrol, and in Spain as a whole, hasn’t always been this desperate. For centuries the city has been famous as a maritime hub, serving as both a major naval port and, more recently, home to Navantia. By the second half of the 20th century, the shipbuilding industry was directly or indirectly employing tens of thousands of people and the population of Ferrol had swelled to approximately 100,000.

In recent years, though, the industry has dropped off precipitously, plagued by European Union efforts to include other ports in the trade — and the global financial crisis more generally. Consequently, Ferrol’s population has sunk to about 70,000 and, on a good day, only a few thousand people can find work in the shipyard, often on short-term contracts.

“The first day, the first week, you're like, ‘OK — I'm going to send CVs to all the companies,’” he said of his transition into unemployment. Through a temp agency, he found a job at a printing shop but it too was short-lived. In the nearly four years since then, Borja has been unable to find even remotely steady work.

“The weeks pass by and you are like, ‘I'm not going to find anything,’” Borja said. “You don't have any hope, really. No worth. It's very depressing.”

It was the day before the navy results were released, and Borja stood outside a local employment center where he started taking vocational classes last year, contemplating whether he was still optimistic about his future. After letting out an enormous sigh, he decided, “ask me tomorrow.” His Steve McQueen T-shirt resettling under his leather jacket, Borja added that getting into the navy would be “the solution to all of his problems.” 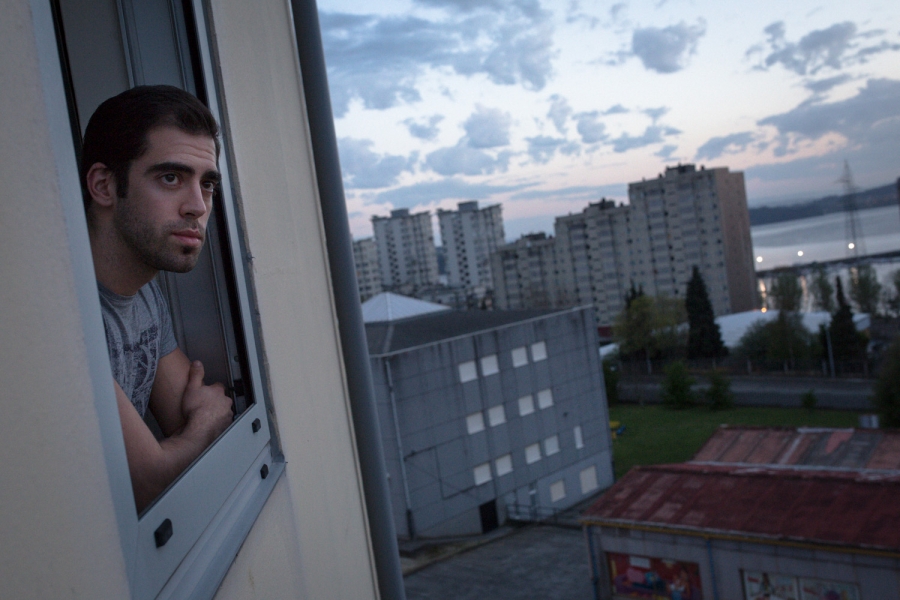 Borja Bernardez, 27, stares out the window at his home in Ferrol, Spain.

Alvarez, the ship captain, says that it’s not just low- to medium-skilled workers like Borja who are pinning their hopes for the future on the navy.

“Now the armed forces, and particularly the navy, are getting a level of education [that is] very high in comparison with the people 10 years ago,” he explained. Indeed, those with bachelor degrees, master’s degrees, or even more advanced qualifications, are all among those eager to join. Take Silvia Villa, for example.

“Everything here gets dirty SO fast,” complained Villa, 30, perched on a workbench counter in the bowels of the Blas de Lezo warship. “Everything!”

Dressed in a greyish green jumpsuit, with a patch on the shoulder marking her as belonging to the lowest rung of sailor, her task is to clean the small machinery room — again. She’s been in the navy for two years, and she has lost count of how many times she’s had to do this.

“[The navy] is just a job. Nothing else,” she says between passes with her rag. “I try to enjoy what I do, but I'm not doing what I really enjoy.”

Villa's path to the navy was circuitous, but not atypical. After getting a bachelor’s degree in psychology, she began clinical work at a hospital and intended to continue studying for her Ph.D. But the plan was derailed when her professor, who was also a close friend and mentor, passed away right as she was set to begin. Deciding it wasn’t the right time to take on a doctorate, she set out to find another way to use her education.

Living at her parents’ home, she searched for a job, with an eye toward military psychology, an area that had piqued her interest as a student. Instead, the only opening she could find was a temporary position as a telemarketer for an insurance company. That ended and, after months more of looking, she eventually found work as a cook through a family friend, but that too was fleeting. Then, like Borja, Villa was left with nothing.

“Being young here is not a gift,” she said. “You see all the days passing and you can't manage to do anything. You try everything and all the doors are closed, and then you begin thinking that there's no way out.” 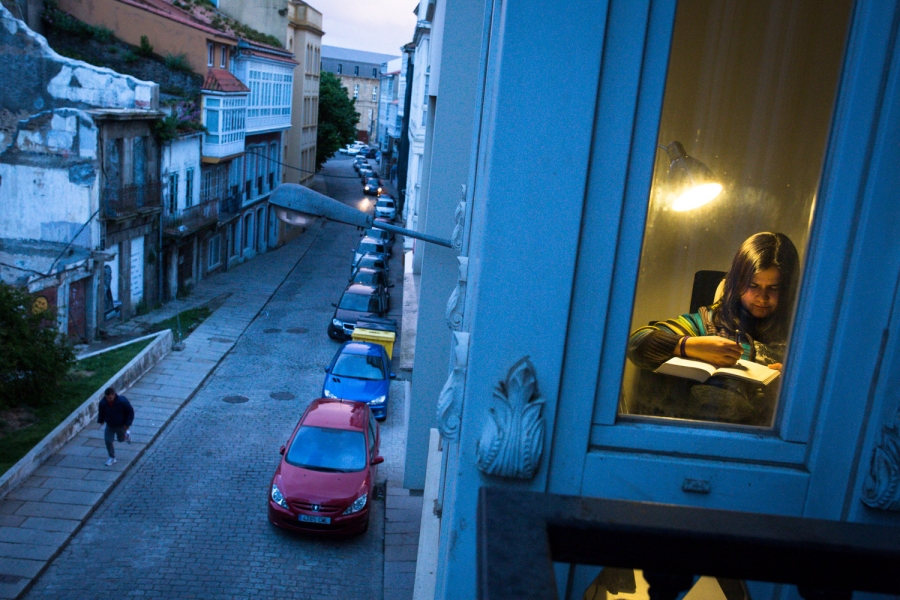 Silvia Villa, 30, joined the navy after being unemployed and living with her parents.

Villa also saw the navy as the answer to her stagnation. While she had to start at the lowest rank, she reasoned that working “from the inside” could improve her chances of transitioning into a military psychologist post.

But, going on her third year of painting the boats without a promotion, she’s learned not to get either overly hopeful or depressed about the possibility of advancement. It’s not ideal, she says, but “at the very end, you feel like the most fortunate person in the world, because you have a job.”

And, with a 35-hour work week while in port, relatively safe deployments (most recently a training exercise in the Black Sea) and little chance of being fired, the navy has a reputation of being, as Borja puts it, “the good life.” No wonder, then, that back at his apartment, he anxiously waited for the exam results to load.

The online document was 484 pages long and listed the top 9,000 applicants. Figuring out whether he got one of the final 1,000 available spots required a nerve-wracking calculation.

Not wanting to waste time scrolling, Borja used the search function to find out how he’d done. For his top choice, serving in the navy in Ferrol, his test score put him at #32 out of 391 for 23 spots. Pen and paper at the ready, he immediately began cross-referencing the scores, names, and preferences of those ahead of him to see if he could move up.

The top ranked person, for example, appeared likely to choose another branch of service —  so Borja scratched them off, shifting himself into 31st position. Continuing this process, he slowly moved up the list: 29th, 26th, 24th and, finally, after 30 long minutes, he was nearly positive that he had made the cut. 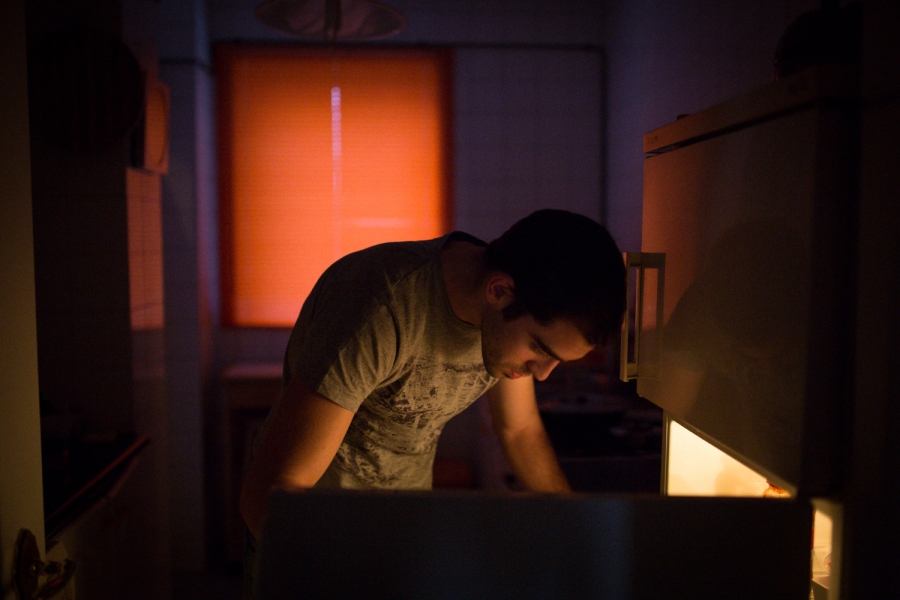 Borja Bernardez, 27, spent a lot of time waiting and hoping that he would be selected for one of a handful of positions with the navy.

He texted his mother and a few close friends the good news, but, as he well knew, the journey wasn’t quite over. This was the third time he had applied for the navy. Last year he didn’t make the academic cut. Four years ago, when it was less competitive, he was ranked number one after the exam but, during his physical, the doctor identified a back problem and disqualified him. So, this time, he was “nervous as hell” about his medical evaluation.

For some reason, the same doctor that denied him four years ago passed him this time, meaning he was all but certain to become a sailor. On June 6, the navy made his placement official.

“It was time for a bit of luck. I needed it,” he said, sipping on a beer that, during the depths of his unemployment, would have had to be bought by a friend. He’ll be making roughly 1,000 euros a month, half of what he was able to earn at Navantia. Regardless, he says, “getting paid every month. That's great.”

But with the Spanish government instituting austerity policies, the public sector as a whole will remain limited in its ability to take on more employees. The more fundamental issue, says economist Marcenaro-Gutierrez, is whether the country’s economy should be so reliant on the public sector in the first place.

In the meantime, however, public jobs like the navy will continue to provide a lifeline to young Spaniards who are lucky enough to land them.

“I was nearly 30, at my parents, with no life,” Villa said of her situation before the navy. “More than happiness, [getting in] was a relief.”