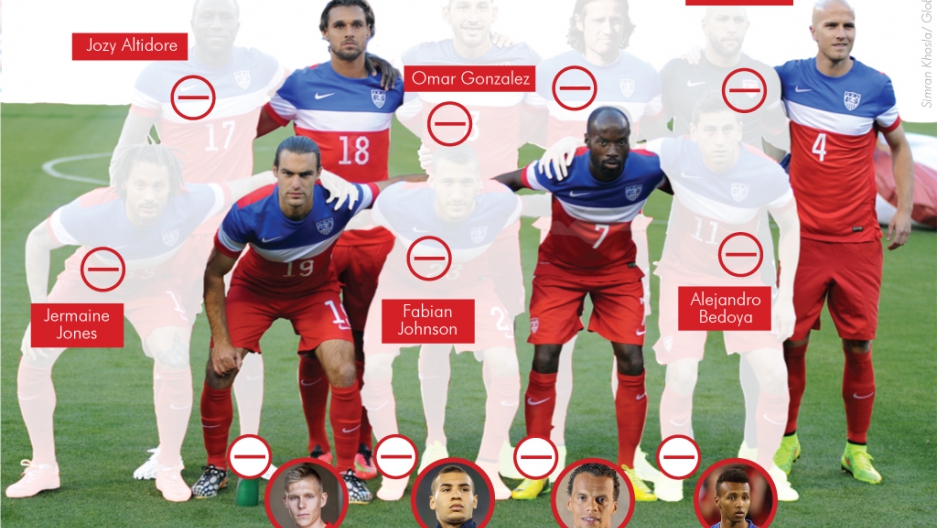 BERLIN, Germany — It's not just morons throwing bananas on the field.

Far-right political parties are gaining ground in France. Most of Germany's soccer hooligans are now neo-Nazis. And this spring, Switzerland voted to curb immigration, defying the spirit of laws that allow citizens freedom of movement across the European Union.

But amid all the bad blood, has anyone thought about how sending immigrants packing would affect the teams playing the world's greatest game? Broadly defining “foreigner” as anyone with at least one foreign-born parent, Switzerland would lose two-thirds of its players. France and the Netherlands might be knocked out of contention. And Algeria, Ghana, Turkey or even Suriname could win it all.

More from GlobalPost: 32 creatively dressed World Cup fans who will make your day

Here's how the world's best would stack up in a World Cup with no first-generation immigrants. A couple of caveats: First, this list isn't comprehensive, hence the ommission of teams like England and Mexico, even though they do have immigrant players. Instead we've highlighted only the group favorites and the "big losers." Second, not all players on every squad are represented here — we've focused on those who were slated to make a difference for the team.

(Odds come from here, and stats from here.)

Croatia has only a slim shot at winning the real Group A, and it doesn't fare much better in the no-immigrant tourney. It keeps Bayern Munich striker Mario Mandzukic, and Hull striker Nikica Jelavic. As noted above, it loses da Silva to Brazil, along with Jorge Sammir Cruz Campos, who was born there. Queens Park Rangers midfielder Niko Kranjcar didn't make the squad because of an injury.

Colombia remains the favorite in Group C, retaining River Plate striker Teofilo Gutierrez, AS Monaco midfielder James Rodriguez, and Atalanta defender Mario Yepes and West Ham United defender Pablo Armero, who's of African descent but not an imigrant by our definition. It lost AS Monaco striker Radamel Falcao from the squad because of an injury.

Facing even odds in the real cup, Uruguay remains even with Italy in the no-immigrants tourney. The South American side keeps Liverpool striker Luis Suarez, Paris Saint-Germain striker Edinson Cavani, and West Bromwich Albion defender Diego Lugano. We'll also let them keep Diego Forlan, whose father and grandfather both played for Uruguay, though they're technically of Basque descent. Atletico Madrid winger Cristian Rodríguez has roots in Spain, and Sao Paolo striker Alvaro Pereira and Palermo striker Abel Hernandez have roots in Africa, but none of them meet our definition of immigrants. However, they do lose Galatasaray goalkeeper Fernando Muslera, who was born in Argentina.

Co-favored to win the group in the no-limit cup, Italy loses less than you might expect in the no-immigrant version. It keeps Juventus defender Giorgio Chiellini, Roma midfielder Daniele De Rossi, Juventus midfielder Andrea Pirlo. However, the Italians do lose a couple guys. Fiorentina forward Giuseppe Rossi was born in New Jersey (though in the end, he didn't make the final squad, anyway). And AC Milan striker Mario Balotelli, born in Palermo, has parents who immigrated from Ghana. Meanwhile, an injury knocked Riccardo Montolivo to the sidelines in early June.

Wee little Ecuador has a slim chance of getting out of Group E in the real cup. But its odds look much better against the almost-empty rosters of France and Switzerland in the no-immigrants version. Monarcas Morelia winger Jefferson Antonio Montero hails from one of Ecuador's indigenous tribes. Al-Hilal midfielder Segundo Castillo ended up being dropped from the squad because of an injury.

A strong favorite in the real Group F, Argentina leads the group in the no-immigrant tourney, too. It keeps Barcelona striker Lionel Messi, Barcelona midfielder Javier Mascherano, Real Madrid winger Angel Di Maria and Manchester City striker Sergio Aguero. However, Argentina loses Napoli striker Gonzalo Higuain, of Basque descent, who was born in France. On the plus side, it picks up Juventus striker Pablo Osvaldo from Italy.

The Germans get our moral support in honor of their recent decision to allow dual citizenship to the children of immigrants. But their football team doesn't look too good without the guys that the red-faced chap at the end of the bar still calls “foreigners.” Germany keeps Arsenal defender Per Mertesacker, Bayern Munich midfielder Thomas Mueller, Bayern Munich midfielder Toni Kroos, Bayern Munich midfielder Mario Goetze, and Chelsea winger Andre Schuerrle. They retain Schalke defender Benedikt Howedes, whose parents were born in Germany though the family has roots in Norway. But they lose superstar Arsenal midfielder Mesut Ozil, whose father was born in Turkey; Real Madrid midfielder Sami Khedira, whose father was born in Tunisia; and Lazio striker Miroslav Klose, who was born in Poland. They'll also take the field without Bayern Munich defender Jerome Boateng, who has roots in Ghana; Sampdori defender Shkodran Mustafi, whose parents are Albanians born in Macedonia; and Lukas Podolski, who was born in Poland. And they lose Marco Reus regardless, to an injury.

Team USA gets to keep San Jose Earthquakes striker Chris Wondolowski — half Native American, with a grandfather from Poland — as well as Seattle Sounders midfielder Clint Dempsey and Stoke City defender Geoff Cameron. However, the melting-pot nation loses Sunderland striker Jozy Altidore, whose parents were born in Haiti; Tim Howard, whose mother is Hungarian; AZ striker Aron Johannsson, who was born to Icelandic parents in Alabama; and Rosenborg midfielder Mix Diskerud, who was born in Norway. We'll also take away LA Galaxy defender Omar Gonzalez, whose parents were born in Mexico, and Nantes midfielder Alejandro Bedoya, whose father was born in Colombia. Finally, we'll take back Hertha defender John Brooks, Nurnberg defender Timmy Chandler, Bayern Munich winger Julian Green, Besiktas midfielder Jermaine Jones, and 1899 Hoffenheim defender Fabian Johnson — all of whom were born in Germany or have a German parent.

Correction: This story has been edited from an earlier version that contained geographic errors and incorrect personal details of some players. Text and/or images have been revised in the entries for Brazil, Croatia, Colombia, Ecuador, France, Germany, Italy, Portugal, Spain, Russia and the Netherlands. GlobalPost regrets the errors.